Was the First Person to Publish a Mock Draft a Woman?

LOOKING BACK
By John Turney
Well, the long and the short of it is we don't know. We do know that what are called mock drafts began to appear regularly in newspapers and magazines in the 1980s (Mel Kiper, Paul Zimmerman, Gordon Forbes) but were only occasionally seen in print in the 1970s by people like Joel Buchsbaum and perhaps a couple of others.

However, in 1969, Elinor Kaine, a New York-based syndicated columnist wrote this one in her column "Football and the Single Girl"— 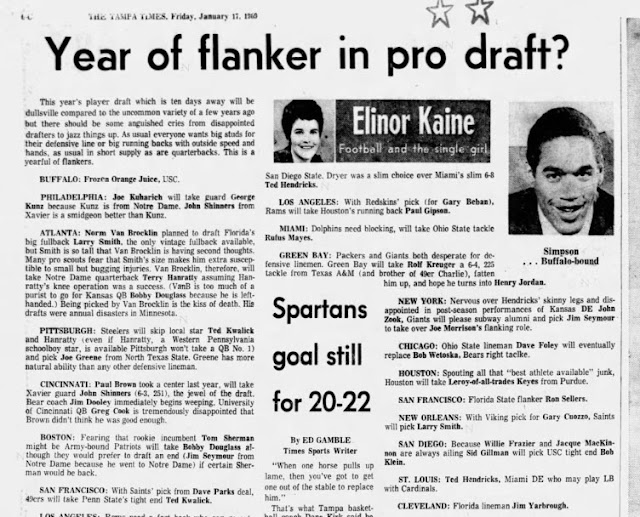 Upon seeing it one Twitter Ms. Penna (her name now) said, "Oh my goodness!  And OJ as well!   What fun—can’t tell you how much fun it is seeing this!"

When asked what the impetus was in penning the column she replied, "Used to go to PJ Clarke's in NYC and a few guys would sit around with me talking about the draft with a few Bloody Marys. The word "mock" was not invented for football fifty years ago, believe me."

Kaine was a pioneer in many ways, you can read more about that HERE and the mock draft may very well be another one of those. We'll let you know when we find out more.