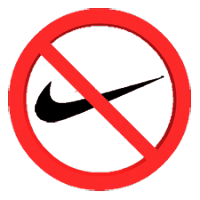 Just because you can do something does not mean you should. Nike Football designers needs to learn this lesson. We don't care so much about college football but there are problems there, too, but there always has been a sense about the NFL that it was above frivolity, trends, and passing fads.

Nike never learned that lesson. They foisted ugly uniforms on the NFL from the moment they got the chance. The first redesign they got to do was the 1997 Broncos. The fans didn't like it but winning the Super bowl changed their tune fast. The pants even had a slight Nike "swish" on them. 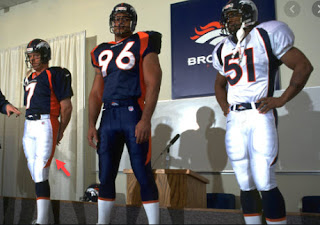 The rounded font was not too bad, at least it was not italics or something unnecessarily modern like that. And it went on from there. Nike was locked out of redesigning uniforms until 2012 (Reebock had an exclusive contract for many years) but in 2012 the Seahawks were rebranded. And they were, honestly, pretty good. The font was upright but they had nine iterations they could play in. And that didn't count the lime green color rush (another story for another time) but Nike had gotten their toes wet. 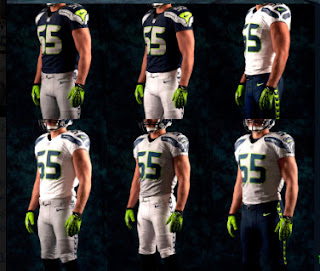 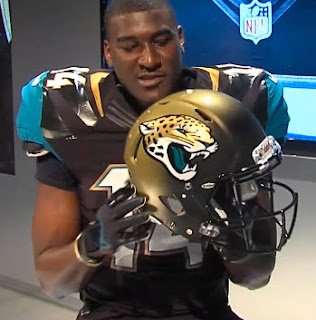 The had to be used for five years due to league rules, but were replaced by kits that were likely worse, if that's possible, again the numeral font the major culprit— 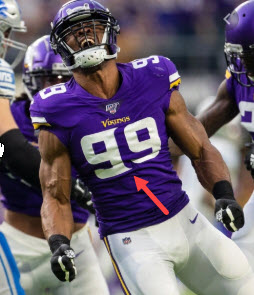 In 2014 the Vikings were up and these were among the better Nike redos. They had a "sail" font which at least makes some design sense. It ties to the Vikings. We'd love to see the tie-in to these other ridiculous fonts. Did Tampa pirates use digital clocks?

The Bucs and Browns unis were so bad they got rid of them as fast as they could. The Bucs went back to something close to what they had before. The Browns are yet to be revealed for 2020.


The Titans font is one of the worst of all. It's hardly readable when fans watch on television or the game—
The Falcons just got infected with the Nike virus with these beauts.
So come on NFL media. It's time someone sat down Nike execs and asked them serious questions about why they insist on modern unreadable fonts and experimenting with looks that often have failed in colleges, i.e. the new Falcons gradient look was used at Texas Tech and they got rid of it—it's a fad, people. And an old one at that.

The media needs to secure interviews with the powers that be at the NFL creative offices where they are allowing such garbage on the field.
This is not an anti-Nike rant. Nike shoes have been part of our life since the 1970s. They make great-looking shoes. But their arrogance and lack of accountability in NFL uniforms is damaging the aesthetics of the NFL and messing with the traditions of the uniforms that brought so many people to the NFL in the first place.

The jury is out on the Rams and Browns uniforms, two teams with long traditions, and we will withhold judgment until they come out, of course, but if there are gradients, superfluous and frivolous fonts used just because they can then they will be fails. And Nike has had too many failures in the last eight years.

Frankly, it's time for the NFL to fire Nike and bring in a responsible athletic clothing company that will respect the traditions that made the NFL great in the eyes of most fans.
Posted by John Turney at 1:36 PM