Who is Canzman and Is He Credible About New Uniforms?

In February an anonymous poster named Canzman on Chris Creamer's Sportslogo.net chat board (the best site for information on any sports logos) posted that seven teams were going to change uniforms to one degree or another. Six of these changes have been announced. The lagger is the Los Angeles Rams.

First, however, is a quick discussion that aired on KOA about the same time this—
Okay. So, (1) Chargers uniforms were going to be "awesome" (2) Browns "nailed it in" (3) Bucs are "what you'd expect (3) Rams uniforms are "awful" and "worse than their logo.

Now to this Canzman who has been called "reliable by other posters for what that's worth.

Here are his relevant posts and the dates—

I cannot state where I got my info, but confirmed 7 teams making changes for 2020: Browns Buccaneers Chargers Colts (very minor) Falcons Patriots Rams These are changes to primary homes and aways and not just a change to an alternate. All the Broncos talk can stop... they are not making any changes for the 2020 season.

All I will say is the Chargers in a major overhaul, not a revert. What I saw was only uniforms for all teams. Never saw any of the helmets so not sure what any team is doing with them at this point.

Chargers, Pats, Browns, Bucs, Colts. I liked... Rams and Falcons not so much

I have no idea what the teams time tables are for release. Where I work we are officially licensed with the NFL so we see things here before the general public, but we aren't given advance notice to when teams plan official releases. We find that out just like everyone else once the team decides to put that info out.

To piggy back on this I would say what the Chargers will release tomorrow in not a classic look but I like it. I might be in the minority but I think it looks good. We will see what others think soon enough. As Infrared said not all Classic is good and not all modern is bad. Case in point I think most would agree that the "Classic" Steeler bumble bee was not a good look. Everything is a matter of personal taste and opinion. All design is new at some point and what sticks is what goes town.

So everything starts to blur after a while seeing all these changes and such and it has been since February when I last saw the files, but if memory serves here are a few details on the Rams. 1. There is a gradient but I honestly can't remember if it was the jersey similar to Atlanta or if it was just the numbers. Sorry again it has been a while. 2. The light or away uniform is not white, and no it isn't yellow either.

As I stated way back when I first dropped all the teams that would have changes I was not a fan of what the Falcons or the Rams did.

The files I saw for all the teams back in February did not show any helmets.

I didn't say the numbers were definately gradient. I said I couldn't remember if it was the numbers or the Jersey but that there was a gradient.

The NFL rulebook states that the home team gets to decide which jersey it will wear, and because most home teams choose to wear darker uniforms with their primary team colors on it at home, it is standard for the away teams to wear white or gray on the road so that the two teams can be easily distinguished by the players, referees, and fans. Thus, teams must have "away" colors, which are generally white or gray with the primary team colors only being used to mark the numbers on the front and back of the jersey. 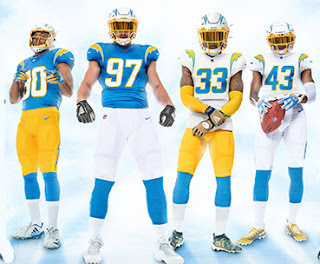 First, he was right about seven teams making changes. Only four were known at the time. Even Paul Lukas who runs Uniwatch.com, the all-time home run king in uniform study didn't know about the Chargers, Patriots, and Colts.

Then he gave his opinion as to the changes—He liked the Chargers, Pats, Browns, Bucs, Colts. He did not like the Rams and Falcons.

Based on our taking the temperature of the fans and gaging what the KOA announcer said about his source's opinions these takes are in line with public sentiment.

Chargers and Browns and Bucs were well-receiver, the Colts was so minor no one was moved one way or another. There were some rumblings about the Patriots. 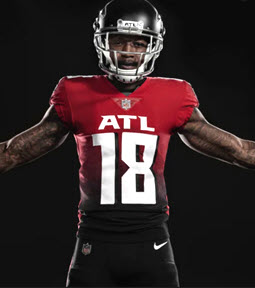 The Falcons were panned by the uniform following community and many Falcons fans, especially the red/black gradient uniform and the "ATL" on the front. The gradient being called "clownish".

So, if canzman was accurate about so many things is he wrong about the uniforms?

We have two witnesses, apparently that the Rams uniforms we disappointing. One said "awful" and one said he "didn't like them". Canzman said the Rams road uniforms were not "white" and also were not "yellow" (Sol). he also said (but could not remember where) there was a gradient either on the numerals or the uniform.

If he's right, and we don't know one way or another, the only color they could be if they are not white or yellow is bone, one of the Rams new official colors.


It will be interesting to see if this canzman is seven for seven in his predictions. As we know, on the Internet, anyone can post anything. The only way to gauge credibility is to see what they post and later go back and check the validity of their earlier posts. That, we did.

He seems credible. But, as with our speculation with the so-called helmet leak we cannot be sure until we are sure—when the uniforms and helmet comes out. Until then it is fun to play detective since the Rams are the last to release their new designs. 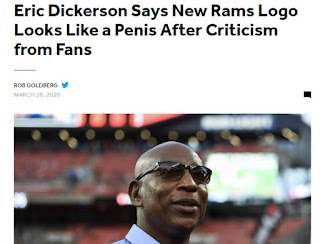 Perhaps they are gunshy after getting blasted by fans and the media for the "penis" Ram head secondary logo and the "Charger-looking" primary logo and that accounts for the delay.
There is even a conspiracy going around on Rams boards that the Rams are making changes to the uniforms because of the fans reactions to the logos, that they are going back to a classic look because they cannot take the heat of the potentially ugly ("awful", "worse than the logo") unis.
We don't buy that for several reasons but it's likely the Rams are waiting it out for some reason. A more likely one is they didn't want to be blown out of the water by the Chargers uniforms which were critically acclaimed. And the Chargers knew it. 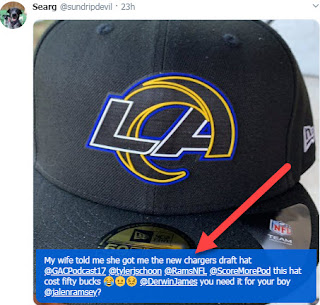 The Chargers even trolled the Rams in their rollout video, stating "Taking inspiration from the subtle curvature of the bolt, we analyzed the ratios underpinning the logo in an effort to craft . . . Nah, who cares, all you need to know is we took the best and made it better." The Rams spent time in their rollout video talking about the Fibonacci sequence in their new logo and Ram horn. 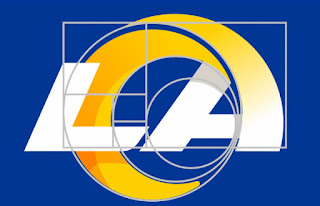 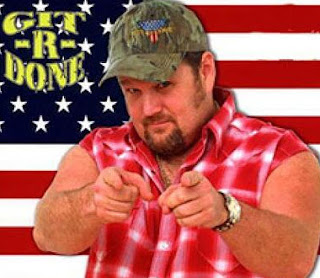 Perhaps it's time to man up and release the uniforms for good or for ill this week. It's time to have the integrity of even Larry the Cable Guy and "Git-R-Done". Waiting is a weasel move.
Posted by John Turney at 9:24 AM