On-the-Field Accounting Errors (1945-1990) Impact Hundreds of Players
The question isn’t so much how the mistake was made, but rather how it wasn’t discovered and corrected the same day.

The Packers (4-5-1) and Bears (8-2) were meeting for the 135th time that afternoon. Chicago was looking to increase its lead over the Vikings (7-4) in the NFC Central Division. Green Bay was hoping to knock off its arch-rival for the first time in three years. 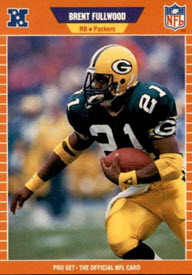 But that’s not our concern. Instead, we focus on Brent Fullwood, the Packers first-round draft choice that year.

Fullwood was making his first NFL start in place of the injured Kenneth Davis (ankle).  The former Auburn Tiger was Green Bay’s third-leading rusher with 196 yards.

In seven games, he had yet to catch a pass.

That changed late in the first quarter in Chicago. Split out wide, Fullwood advanced 12 yards on a short toss from quarterback Randy Wright.

Early in the third quarter, the running back again turned receiver. This time, Fullwood scooted 10 yards with a dump-off from Wright.

That’s two catches for 22 yards. The rookie should have led the team in scrimmage yards with 86.

Incorrect, says the NFL. Check out the gamebook available at NFL GSIS. Fullwood is given credit for just one reception, that his first-quarter effort.

So, was this faux pas involving Fullwood an isolated mistake? Was it an aberration?

Over the years, hundreds of errors were made those responsible for documenting the action on the field.  That everything wasn’t kosher became apparent to me as I transcribed hundreds of play-by-plays into Publisher and then into Excel.

When I began my research in the late 1980s, I thought everything would add up. If a player was said to have gained x yards, then x yards he would have gained.

How naïve was I?

Now, I’m not disparaging those in the press box. Everyone is fallible. Certainly, I’ve made my share of mistakes.

But I struggle to understand some of these blunders. Especially difficult to fathom are those—such as the one in Chicago 33 years ago—that occurred under the lights of television.

“Third down and long,” announcer Tim Ryan said as the Packers readied to snap the ball from the Chicago 43. As the play unfolded and Wright unloaded, Ryan continued. “Fullwood inside the 25, but fourth down. (Reggie) Phillips forced him out.”

Ryan, his partner Joe Theismann, and millions more witnessed Fullwood make the second catch of his young career in that third quarter. Yet those in the press box either ignored the play and instead let stand an earlier reception by wideout Phillip Epps – one wiped out by penalty – or they assigned to Epps what should have been Fullwood’s.

Either way, they got it wrong. Why a reporter, a public relations individual or even a fan failed to point that out remains a mystery. 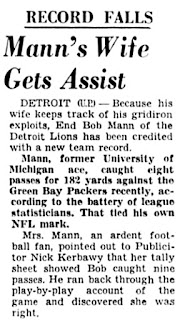 Dorothy Mann didn’t remain quiet. She spoke up on that final weekend of regular-season games in 1949.


Sitting in the stands at Briggs Stadium, the young woman tracked the progress of Detroit receiver Bob Mann. She carefully wrote down each catch her husband made.

When the Lions declared Mann had caught eight passes that day, she was adamant he had snared nine.

A review of the play-by-play ensued. Dorothy was right. A change was made.

Paul Zimmerman didn’t hold his tongue, either. A longtime writer for Sports Illustrated, Dr. Z was anything but shy.

Zimmerman took the time to point out a mistake had been made. He approached Seymour Siwoff, the head of the Elias Sports Bureau.

“He scoffs, as usual,” Dr. Z continued. “I try to show him where they’re wrong. Deadline time, post-SB is a heavy pressure occasion for all parties concerned, and Seymour is even more hysterical than usual.”

Siwoff asks Zimmerman to leave him alone. Dr. Z says he will, as soon as the official stats are corrected.

Finally, Siwoff takes a look. A minus-two rushing by the Vikings had been recorded as a plus-two giving Minnesota 21 yards for the game instead of the correct 17.

“Seymour’s face got pale,” Zimmerman recalled. “‘Jesus Christ,’ he said. I returned to my seat. No more words were spoken.

According to Dr. Z, Seymour never said another word to him. No thanks. Nothing.

“What I should have done,” Dr. Z related, “was just shrugged and written about the f***-up and let him and his arrogant f****** crew swing in the breeze on the waves of ridicule.”

As I’ve said, I’ve uncovered oodles of errors in the last 30-plus years. What to do with them?

After thinking about it for a number of years and taking ample time to ensure the league erred and not I, I decided to publish what I found. Click HERE to view the entire list.

My intent is twofold: to provide an idea of how many mistakes exist, and to show the various types of gaffes that were made.

The list covers the years from 1945 through 1990, but it is not complete. I do not have official play-by-plays and/or film for every Packers games from that 46-year span. My compilation includes only what I discovered given the resources I have.

In many cases, the NFL and I are off by one yard, or one carry or one whatever. Sometimes the differences are more pronounced.

In one instance, a pair of all-time bests is at stake. And, after nearly 70 years, it’s time to set that record straight. 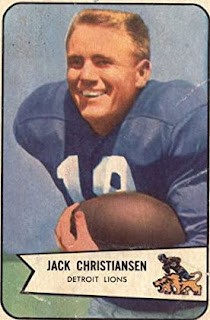 Jack Christiansen played eight seasons (1951-58) for the Lions. The defensive back and return specialist was inducted into the Pro Football Hall of Fame in 1970.

As a rookie, Christiansen became the first player to return two punts for touchdowns in the same game. He did this against the Packers on Thanksgiving Day 1951.

The NFL claims Christiansen returned four punts for 175 yards (43.75 average) on that holiday. A review of the official play-by-play and one kept by Green Bay Press-Gazette sports editor Art Daley make it clear Christiansen had only three returns.

He then closed out Detroit’s scoring by racing 89 yards to pay dirt with Cone’s only punt as a professional.

But what of Girard’s first punt?

“Girard punted from his own 42 out of bounds on the Lion 14,” reads the official play-by-play. “Girard Punt OB – on 14,” Daley wrote in his notebook.

A punt out of bounds means Christiansen had only three returns. That, is huge.

Both records should have been Christiansen’s from the moment Detroit finished waxing Green Bay 52-35.

So, do I expect Christiansen to one day get his due? Do I expect the league to look at what I have brought to light and make changes?

Seriously? I’m not that naïve.
Posted by Eric Goska at 5:06 PM