LOOKING BACK
By John Turney
In 1975 in Peterson's Football Annual, Chuck Benedict introduced us all to the concept of "trade strings", the idea of one player being parlayed into many players via trade. He gave several examples and one was the Bobby Layne trade to the Lions in 1950. However, Mr. Benedict left his work unfinished and had a few small errors and we've always wanted to expand his excellent essay to present day anyway.

We hear a lot about NFL draft busts, first- or maybe second-round draftee that yield nothing for the team that drafted them and also we read about low round players or free agents that far exceed their draft status and we celebrate them.

But sometimes there is something in between that goes unnoticed because the player changes teams and becomes forgotten in time.

One such player is Bob Mann.

Mann was signed by the Detroit Lions as a free agent in 1948 (and was the first African-American player the Lions ever signed) and had a fine rookie season, catching  33 passes for 560 yards and three touchdowns. Then, in 1949, he had a huge second-year leap to lead the NFL in reception yards with 1014 on 66 catches. The NFL didn't have a Pro Bowl that year but had there been one he surely would have gone to it but he did gain honorable mention All-Pro honors for his efforts.

So, he became a perennial All-Pro for the Lions after than, right?

But he had built up his value enough to be valued equal to that of Bobby Layne. What was Layne's value? Just a year earlier the Bulldogs sent two #1 picks to the Bears for him.
In 1950 move from the Bulldogs to the Lions it was more complex. Layne was traded to the Lions for Camp Wilson, who refused to report to the Bulldogs and retired rather than pla for them. So, the NFL ordered Mann to the Lions. Mann wanted a raised from the Lions based on his stellar 1949 season. So a month or so after the original deal, Mann was a Bulldog and Layne was a Lion.
And the rest is history, right?

First, there were some oddities with Mann who refused to report to the Bulldogs and was released then was claimed by the Lions on waivers but also lost to the Packers on waivers and ended the season with them, playing the last three games. He played his last four seasons with Green Bay.
Layne, of course, played 8-1/6 seasons for the Lions, winning two titles in what became a Hall of Fame career. Then, after two weeks into the 1958 season (the 1/6 season we just mentioned) he was traded to the Steelers for Earl Morrall and a second-round pick and a fourth-round pick.
Other than 1963 (174/328 53.0 % 2621 yards  24 TD  14 INT and an 86.2 rating) Morrall was a backup for the Lions, albeit a good one (11-5 in starts other than 1963). So, while no Bobby Layne the Lions did get some value for Morrall.
The second-round pick they received was guard Mike Rabold who was a backup for one year and then traded to the Cardinals for strong-side linebacker Carl Brettschneider who gave the Lions three solid seasons and part of a fourth. Brettschneider was no star but he fit perfectly into the Lions defense opposite the blitzing Wayne Walker, the Lions weakside 'backer, and next to Hall of Fame middle linebacker Joe Schmidt.

He also had to cover the flat and know, to the extent any person could, what Night train lane was doing on that said, so he could cover any gaps left by the freelancing all-time great left corner. Brettschneider was a solid, unsung type, an "All-Joe" if you will.

The last pick in the 1958 trade was Roger Brown, the dominant right defensive tackle who gave the Lions seven years of stellar All-pro service. He could have been the NFL's Defensive Player of the year in 1962 had such an award been available—The NEA didn't start giving one until 1966. He was, at his peak, better than Hall of Famer Alex Karras, but Karras likely had a longer, more steady career and got the nod to Canton.
In August of 1967 the Rams Rosey Grier blew out an Achilles tendon and was done for the year and as it turned out, done for his career. Rams head coach George Allen was desperate to replace him, not wanting to compromise the talent level of his Fearsome Foursome defensive line so he was able to pry Brown away from the Lions for the ole' Lawrence Welk deal, "Ah one, ah two, ah three". Allen had his right tackle, the Lions had three more picks from the draft string that began with Mann.
However, we need to go back to prior to the Brown-to-Rams trade for a moment.

In 1965 Earl Morrall was traded to the Lions in a three-way deal that netted the Lions Mike Lucci and a draft pick. Lucci was the starting middle linebacker for eight years and received post-season honors in 1969, 70, and 1971.
The Lions had a hole at 'Mike' with Joe Schmidt retiring and while Lucci was no Schmidt he was a quality player, picking off 21 passes in his right Lions seasons. Lucci had been a part-time starter at middle-and outside linebacker in Cleveland, just looking for a change to play full-time and the trade to the Lions was it.
The Lions also got a pick that tuned out to be Doug Van Horn. The Lions got one year out of him as a backup then sold him to the Giants. He turned out to be a solid player, and the Lions may have missed on him. But that's a story for another day. 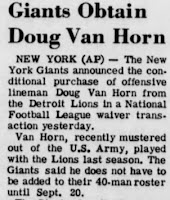 Another player involved was Darrell Dess a 30-year old guard who never played for the Lions. Instead, he was sent to Washington for guard Ted Karras and quarterback George Izo. The Lions got a year out of each including a year od starts out of Karras (Alex's brother) and a 2-1 record as a backup out of Izo. 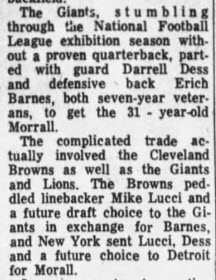 Both were cut in the Fall of 1966 and Karras was picked up by the Rams and Izo by the Steelers and both closed out their careers that year. 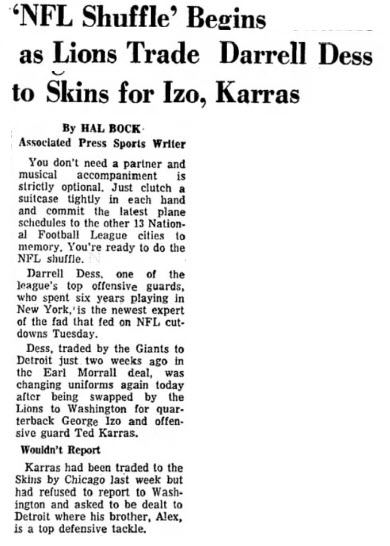 So, back to the three picks acquired for Roger Brown.

The first-rounder was Earl McCullouch in 1968. He has to be classified as a first-round bust. His best season was hist first, he was All-Rookie but he kept getting hurt and his production kept going down. He played six seasons and was finally cut. 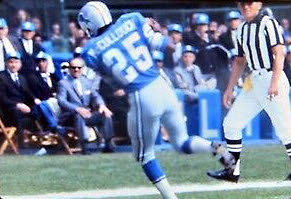 The second-rounder was in 1969—tackle Jim Yarbrough out of Florida.  He was decent, but out of nine seasons got only six starting seasons from him. He was "just a guy". Perhaps this is where Van Horn could have fit in. With him at a tackle spot maybe this 1969 second-round pick could have been a more productive player. Who knows? 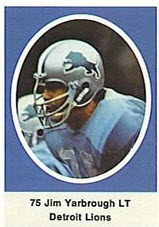 Last and certainly not least was Charlie Sanders, the Hall of Fame tight end, was the third-rounder, taken in 1968. He was a three-time All-Pro and a seven-time Pro Bowler and played ten years for the Lions. Not a bad way to end the draft/trade string. 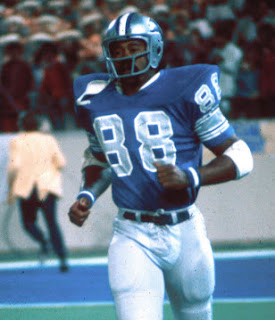 So, what is the tally? What did the Lions get in terms of service from signing Bob Mann and then trading him to the Bulldogs then getting "salvage value" from that player and then from those picks and players and so on and so on?

All from one free agent signing.

Talk about good value.
Posted by John Turney at 9:40 PM