Okay, Fine, We'll Do It—A Look at the Rams' Uniforms Through the Years

LOOKING BACK
By John Turney
A few hours ago on RamsWire we got a pretty typical post called  A look at the Rams' uniforms through the years. It's not bad. Some good shots there. But like the Rams uniform release with the errors in that this was incomplete. So, we thought we'd give a more complete version—in color.

We've ignored various patches and changes in fabrics and focused on major changes in the uniforms unless noted. Hope you like it and find it informative.

In 1937 the Rams wore red and black.In 1938 The Rams changed to blue and gold for the first time, with a dark blue (navy and yellow).

In 1939 they went to a royal blue with yellow numbers and an old gold helmet and pants.
In 1941-42 The uniforms were similar but went with yellow helmet rather than old gold.

Same jerseys but now a blue helmet.
First year of the Rams logo-the horn. Pictured is Fred Gehrke the man who painted the helmets.
Rams also had a blue jersey in 1948.
In 1949 Rams broke with tradition and went with red and gold and changed the horn for one year.

In 1950 the Rams added Northwestern stripes and went to white pants.
They also had a blue jersey they rarely wore.

In 1953 the Rams added white trim to the numerals.
Rams went to white jerseys with Northwestern stripes.

And blue jerseys with same striping and white trim around numerals.
In 1958 the white striping was removed.

In 1962 the Northwestern stripes were replaced by UCLA loops.
In 1964 the Rams went with what became their incon look with fat shoulder stripes and th blue and white color scheme.
They also had a sharp color for their road blues.
In 1973 the Rams went back to blue and gold. The numbers were hard to see from the press box so the white trim was removed after two preseason games.
The Rams wore this uniform from 1973-99. They wore blue shoes from 1973-76 and in 1981 they switched from grey facemasks to blue. Also, the original Rams socks had white trim but when the white trim was taken from the jerseys it appears the Rams ordered new socks sans the white trim. 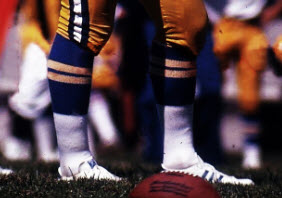 For the NFL's 75th Anniversary teams wore "Throwback uniforms". This was the Ram iteration.
In 2000 the Rams changed from royal blue and gold to navy and old gold (Millennium blue and New Century gold they called it). And they had a lot of iterations with two jerseys and three pants.
In 2002 the Rams changed the names of the colors to "Midnight blue and Championship gold" from "Millennium blue" and "New Century gold" for some reason.

Then when they moved back to Los Angeles in 2016 they changed to white masks and white horns and there were even more combinations. Throw in the blue and gold throwbacks and the gold color rush uniforms it's quite a lot to keep track of. We think we got them all.


Finally, the new ones announced yesterday. They are Rams Royal and Sol and the light ones are "Bone". That means blue and gold and light gray.

So, there it is. A more comprehensive look at the Rams uniforms, in color, since 1937.