LOOKING BACK
By TJ TROUP 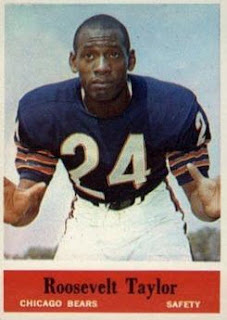 Sure enjoyed writing about Richie Petitbon in April, and no story on his career can be complete without mention of his running mate at safety—Mr. Roosevelt Taylor.

Since this vastly under-appreciated player has left us, and since he played most of his career for my beloved Bears it is time to enlighten one and all on the position he played.

Not only will Taylor be featured in this saga, will address a recent article I read, and the responsibilities of the right or free safety. The right safety can be utilized in double coverage helping the right corner, he can roam "centerfield" and play the ball in flight, he can take the running back out of the backfield man to man, or he can even "blitz" the quarterback.

Years ago in messages and conversations with Paul Lionel Zimmerman he demanded that he be educated on the safety position, and historically the responsibilities. Am not going to cover the history of the league; as Taylor played from 1961 through 1972. Let us focus on that era, the players, and a handful of teams.

George Allen was hired by the Papa Bear in '58 to work in player personnel, and his coaching experience and enthusiasm enabled him to work with the Bear secondary. Taylor was a quick tough athletic free agent who made the team in '61due to Allen. Taylor's limited playing time in '61 changed in '62 as he became the starter at right or free safety. Under Allen the Bears combined man and zone principles.

This concept will only work(be effective) if the right safety has an abundance of ability, and Taylor did. Watching film of Taylor zip across the field, make sure tackles, and intercept passes helped the Bears win the title in 1963. Earlier this morning read an article by Gene Chamberlain at Bears Digest on the best Bear secondaries of all-time.

A daunting task and Mr. Chamberlain should be commended for attempting to write the article, YET the story he wrote is deeply flawed. No mention of any Bear secondaries previous to 1963? Without further ado, the best Bear secondaries previous to '63 are as follows; early 40's, and especially 1943 the Bears allowed only 8 touchdown passes, and intercepted 11.8% of all passes attempted against them (24).

By this time anyone who reads my stories here at the Journal knows how I feel about the defensive passer rating system. While this stat is not the be all end all statistic, there is definitely merit to using this tool to evaluate TEAM pass defense. Bears defensive passer rating in 1943 was 22.0, and the league average was 48.6. Chamberlain never mentions Johnny Lujack, Don Kindt, and very underrated Noah Mullins.

The Bears in 1948 have a defensive passer rating of 31.7 (league average is 60.0) and having watched film of them—the Bears of '48 rank as one of the three best second-place teams of all-time, and these men were vital reasons for success in '48. Clark Shaughnessy's myriad (mystical) defenses of the '50s had their moments, but pass defense was not one of the reasons why the Bears won.

The best Bear secondary of the decade should have been in 1959 with Petitbon, Barnes, and Caroline. Many men attempted to play the right safety position for the Bears in the decade of the '50s, and though most of the players had their moments, none would be ranked among the league's best at that position. That brings us back to Allen, Taylor, and the '63 Bears.

Green Bay in 1962 dominated the Bears, and the league, and in '63 again played terrific team pass defense, yet Allen has revamped, pared-down, and used his "cutting edge" concepts to stifle quarterbacks all over the league.

Roosevelt Taylor is a key factor in the Bears championship season, and he continues to play outstanding football from 1964 through '68 though George Allen leaves after '65 to rebuild and lead the Rams. Jim Dooley took Allen's nickel concept and renamed it the "Dooley Defense", and in 1967 the Bears allow opposing passers just a 42.7% completion.

Dooley does not have the relationship with his men in the secondary that Allen did, and one by one they leave, and the Bears flounder—try 1-13 in 1969 with men attempting to play defensive back that should not even have been in the league. Dooley trades Taylor to San Francisco for Howard Mudd. This will not be an in-depth history of the right safeties in 49er history, but San Francisco tried a number of men at the position including one of the worst of the decade in George Donnelly. A talented team like San Francisco can complete for a playoff berth under Dick Nolan if he can find someone to play right safety. 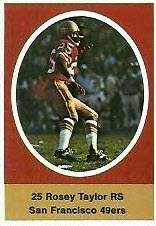 Jimmy Johnson and Kermit Alexander both played strong football for the Niners in the secondary, yet pass defense is a team concept, and as such San Francisco just cannot win a division title—until Taylor.

The Len Eshmont award is a coveted honor for the 49er organization, and Roosevelt Taylor wins this award when San Francisco wins the division in 1970. Taylor is not the reason the Niners won the division, he is the final piece to their championship puzzle.

The 1971 Washington Redskins under Allen's guidance earns the wild card and travels to the City by the Bay to take on Taylor and the Niners. Imagine the look on George's face during warm-ups as he watched Taylor. Though Brig Owens played strong football for the 'Skins, he is best suited to play strong safety not free, and as Petitbon finally hits the wall, he is replaced by Owens, and Allen (trader George) bargains with San Francisco and comes away with Taylor for his Super Bowl season of '72. Now back to the best Bear secondaries of all-time as written about by Gene Chamberlain.

He does not mention the '77 Bears led by Fencik & Plank who allowed only 7 touchdown passes, and for the first time in 14 years earns a playoff berth. Chamberlain's article discusses the mid '80's secondaries and continues on to the present day. Buddy Ryan's pass defense concepts are far different than every other defensive co-ordinator, yet very effective with the monstrous pass rush.

Fencik and his playmates maximized their abilities, and boy oh boy did they have fun limiting opponent offenses. Agree with him that Todd Bell in '84 was better than Duerson in '85 through '88. Lovie Smith's stacked linebacker alignment with Briggs & Urlacher was a concept that worked since little Mike Brown and Peanut Tillman took care of the heavy work in the secondary.

As for the Bears of 2020 am convinced that Jackson can put together more than one all-pro season, and join Roosevelt Taylor as one of the few Bear right or free safeties to distinguish themselves in Navy Blue & Burnt Orange. In closing, of all the plays in Taylor's career the one that still stands out to me is November 26th, 1967.

Travis Williams has become a force to be reckoned with on kick-off returns and ranks with Sayers as the best in the league. Williams with his size, and roadrunner speed rockets through the Bears on a kick-off return until 186 pound Taylor tackles Travis. The hit is eye-popping, and Taylor holds on as he hits the Wrigley Field turf.
Posted by TJ Troup at 6:54 AM