Gerald Irons was born May 2, 1947,  in Gary, Indiana and today media reported that his family announced his passing Friday on Facebook due to complications of Parkinson's Disease. He was 73.
Irons was the Oakland Raiders third-round draft pick out of Maryland-Eastern Shore (where he played defensive end and guard) in 1970—the same school as Raider Legend Art Shell, who, according to Irons "recommended me" to Raiders scout and personnel man Ron Wolf. Irons was named to the Maryland-Eastern Shore "Hawk Hall of Fame" in 1984.
In 1968 he was AllConnference for M-ES and in 1969 he was Second-team on the Pittsburgh Courier All-America Team
At 6’2” and 225 pounds, Gerald was the prototype NFL linebacker in the 1970s and played a backup role in 1970 and 1971 and in 1972 he secured a starting position at right linebacker and held it through 1975 when he was traded to the Cleveland Browns with a ninth-round pick for a browns Second-round pick. Irons had become expendable with the addition of Ted Hendricks in 1975 and the Raiders wanted the Mad Stork to start in 1976 (Hendricks had been a role player in '75) and the Browns grabbed him.
Irons was never a Pro Bowler nor All-Pro but from  1973-75 he got enough votes to be listed as honorable mention All-AFC. In his starting seasons for the Raiders he averaged 86 tackles, 10 passes defended, 2 picks, and five run stuffs—all respectable numbers. 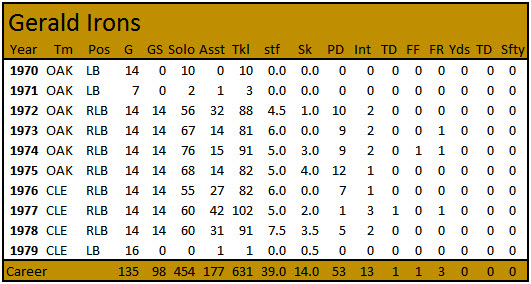 Irons picked up his solid play with the Browns averaging 92 tackles 6 stuffs, and 2 sacks in his three starting seasons there, and was part of the rebuilding process that saw the Browns turn to a playoff team by the end of Irons' tenure there.
He was named an “Oakland Raiders Legend” and is listed among the “100 Greatest Cleveland Browns” of all time. He was named to the Indiana Football Hall of Fame in 2013.
During the off-seasons with the Raiders, Gerald earned an MBA from the University of Chicago, and later he got his law degree from John Marshall Law School. In addition, he learned to speak Japanese, which has helped his very successful post-NFL business life and in public education.
Irons is survived by his wife Myrna and sons Gerald, Jr., Jarrett, and Grant.
Posted by John Turney at 8:49 PM