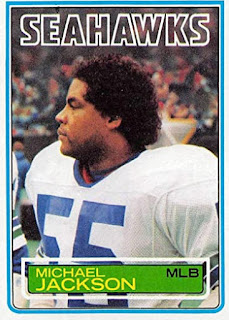 In the late 1970s through the early 1980s, it was hard to make All-Pro or the Pro Bowl as an outside linebacker because there were so many quality outside 'backers at that time.
Lawrence Taylor and Hugh Green came into the NFL in 1981, before that players like Jack Ham, Matt Blair, Brad Van Pelt, even Dave Lewis, and Jim Youngblood were fighting for post-season honors. Also All-Pro mainstays like Ted Hendricks and Robert Brazile were also in the mix. Jerry Robinson of the Eagles was excellent in 1980 and 1981, Joel Williams the Falcons ROLBer had 16 sacks in 1980 and the best he could do was honorable mention All-NFC.  Bob Swenson of the Broncos was All-Pro quality in 1979 and 1981.
It was in this environment that Seattle linebacker Michael Jackson had his best seasons as a left-side linebacker in a 4-3 defense. Though small (6-1, 220) he was fast and had a nose for the ball. He certainly was Pro Bowl quality in 1980 and 1981 (but didn't make it) as a player who could cover a back or tight end or drop into zone coverage. He could also chase plays away for him and catch backs that way since they couldn't outrun him.
In 1982 he moved to the middle to take advantage of his speed but his lack of size possibly limited him on inside players but he performed okay. He did get into trouble in the second-to-last game where he was ejected and then suspended for the finale for a few infractions, including striking an official. But he was on pace for a 125-tackle, 10-PD, 4 pick-season (based on 16 games) playing in the middle.
But that was nothing new, Jackson was very emotional and volatile prompting one NFL writer to suggest that Jackson got at least one roughing penalty a game.
Then, in 1983, the Seahawks changed to a 3-4 and that just was not a fit for Jackson and though he battled hard (and battled knee injuries) he never was going to be a top-notch 3-4 outside linebacker. He got hurt both in 1983 and 1984 and n 1985 was okay, but didn't make the plays he did when he was a SAM in the 4-3. 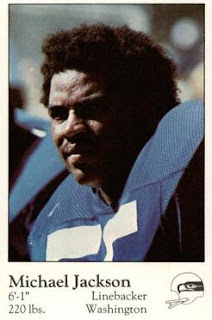 In 1986 he lost his job and when asked about it said, "Pride is a hard pill to swallow, but it will go down". He did get one chance to start in 1986, week and made his presence known making 5 tackles, forcing 3 fumbles, recovering one. It was to be his NFL swan song.
Career statistics—

To us, it is nice to remember solid players who contributed to the game even if they got few post-season honors and Jackson falls into that. Jackson, as we mentioned never was voted to a Pro Bowl and didn't get any major All-Pro teams, but he was no unnoticed, either.
Gannett's Joel Buchsbaum, in 1980, named Jackson to his personal All-Pro team, and in 1981 College and Pro Football Newsweekly, honored him with All-Pro honors and the New York Daily News' Larry Fox named him All-AFC. So he was noticed, but as we said, it was just hard to stand out in an era where there were so many standouts at your position.
But at least Buchsbaum, Fox, and people like Frank Ross at C&PFNW noticed that Jackson averaged 140 tackles, 5 stuffs, 2 picks, and 2 forced fumbles those two seasons. This is something, even if it is not the major honors fans may notice.
Jackson, even at 220 pounds, would be someone who could play today, as an off-the-ball backer, the type of player like Deone Bucannon was for the Cardinals or Mark Barron was for the Rams a few years ago—Buchannon spot was called "money backer" and Barron was a WILL in 2015 in a 3-4 then was a "Mo" backer in Wade Phillips' defense. Both were converted safeties, though, while Jackson was a top linebacker in college.
At the University of Washington, Jackson was All-Pac-8 in 1977 and 1978 and was a consensus Second-team All-American in 1978 (AP, UPI, NEA).
After his playing career Jackson was an actor but now works at a nonprofit organization that fights homelessness, drug and alcohol addiction in young people. 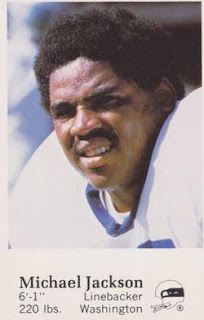