By John Turney
Adam Schefter, among others, reports the news of a trade between the Rams and Broncos that brought future Hall of Famer Von Miller to the Rams for second-and third-round picks in the 2022 NFL draft. 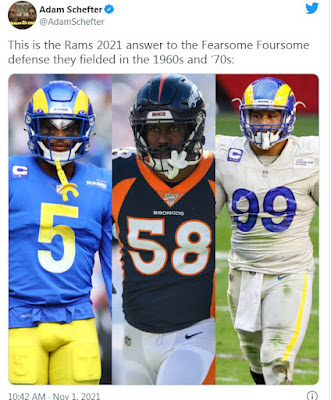 His tweet reminded up of this 1977 ad in the Los Angeles Times featuring three All-Pros, one from each level of the defense, Isiah Roberton, Jack Youngblood, and Monte Jackson. 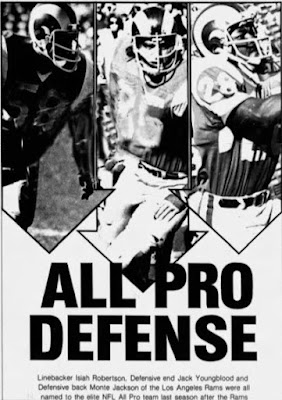 Aside from the obvious things like what will the trade mean to the balance of power in the NFC and the NFC West were are curious to how Miller will be employed in the Rams defense,

Miller has been a left outside linebacker his whole career, and a left defensive end in nickel his whole career, with few exceptions. We'd guestimate he's been on the left edge 90% of his career or even maybe a bit it more.

The Rams have Leonard Floyd at that position. This year we'd guess he's been the left edge in base and nickel around 90%, give or take a few percentages.

Last year we'd say the numbers were 80% or so because he'd played a little more on the right than this year and he'd play a Joker role some last year, a stand-up linebacker who would pick his hole and rush from behind the defensive line.

While we do not anticipate any issue, we'd expect, though we could be wrong, of course, that Miller will eventually take the left edge and Floyd will move to the right with Terrell Lewis and Ogbonnia Okoronkwo spelling them.

Either way, when healthy Miller is still one of the best edge rushers around and will help the Rams defense in a category they are already excellent in (they lead the NFL in sacks and are among the leaders in pressures).

So, we will see if this "all in" bet pays off since they had as good a chance as anyone at winning the Super Bowl if they had stood pat and on paper, this move only makes them stronger.