Hard to find linemen so far this year, lots of injuries, illnesses, and lack of playing time in preseason seems to have caused a lack of cohesion early in the season. However, they seem to be coming around now.
Other positions are pretty easy. We expect plenty of changes between now and the end of the season because many picks were close and things can change pretty quickly in the NFL.
The defensive positions are very tight and though we won't be listing them there are a lot of honorable mentions in the defensive fronts and linebackers and there are a few quarterbacks that are certainly worthy of well.
So, the season's end All-Pro will have more things sorted out. 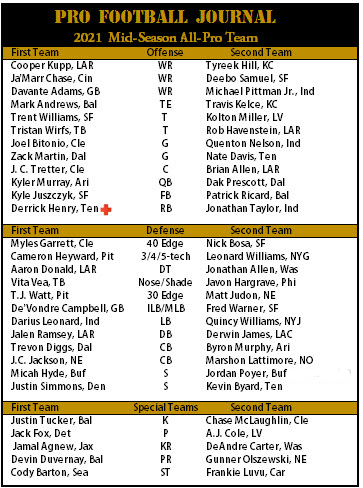 Quinnen Williams (4.5 sacks, strong interior presence) and Maxx Crosby are honorable mentions on the defensive line, Williams behind Heyward and Leonard Williams (45 tackles, 5.5 sacks). Leonard Williams almost edged out Cameron Heyward (50 tackles, 2 sacks, 5 deflected passes) but Heyward has been so strong this year.
We looked closely at Sebastion Joseph-Day the Rams nose tackle, but after an exceptional start, he's faded that last month. The same for Maxx Crosby (5 sacks, 19 hits), although he has not faded really, he still puts good pressure on the quarterback it's just that Nick Bosa (7 sacks, 5 TFLs, 15 hits) is better. Myles Garrett (10.5 sacks, 20 QB hits) is on pace for 20 sacks. We'll see if he gets there.
Haason Reddick (7.5 sacks, 5 TFL vs the run) was third in our 30 edge category. Tremaine Edmunds, Demario Davis, and Devon White are right there with Campbell and Warner, everyone is just neck-and-neck
Darius Leonard and Quincy Williams are the off-the-ball -type 'backers—whether a SAM or a WILL. We'd like to put Williams on the First-team but Leonard is one of the top four or five defenders in the NFL (behind Donald. Garrett, Ramsey, and Simmons) in our view so Quincy is stuck on the Second-team. We still like Xavien Howard at Miami and Tre'Davious White of Buffalo. Jordan Porter of Buffalo is worthy as well.
Jalen Ramsey is a corner, nickel (star), even some linebacker. Derwin James is the star for the Chargers and plays right safety in their base.
The receivers were pretty easy five or six stood out and then there were some good ones. Cooper Kupp is averaging 115.5 yards per game, third-best in Rams history so far, and could smash a lot of records if he stays on his pace.
Ja'Marr Chase has been great and could threaten rookie records. Adams is so fun to watch as is Samuel.
Tom Brady, Aaron Rodgers, and Matthew Stafford could all make a claim for the quarterback slot. The end-of-the-year All-Pro running back slot is now up for grabs with Derrick Henry out but Jonathan Taylor has the momentum. We will see if he sustains in beginning this Thursday.
The next two months will be fun. There are 4-5 excellent teams in the NFC and in our view a few in the AFC.
We'll give the final All-Pro team after the 17th game along with an All-Rookie team by Chris Willis of NFL Films.
Posted by John Turney at 9:25 PM