(Part One of an on-going series)


The National Football League didn’t recognize a Most Valuable Player Award until 1938 when Joe F. Carr, President of the league at that time, announced that the NFL would officially name MVP that season. Giants’ center-linebacker Mel Hein won the inaugural award receiving a watch at midfield right before the kickoff of the 1938 NFL Championship Game at the Polo Grounds. In this series of posts I’ll take a look at several retroactive races for NFL MVP, the players who would have likely won an award if one had been given.
This first one is for the 1936 NFL season. In a decade dominated by rushing, the 1936 NFL Season was no different in fact, it was typical. The twelve NFL teams, playing twelve league games on the schedule, totaled 15,370 rushing yards on 4,453 carries (a 3.5 average) with 166 touchdowns. While the passing statistics are downright awful. NFL signal callers of 1936 threw 1,656 passes and completed just 604, a completion percentage of 36.5 percent, for 8,960 yards.

The more glaring stat is the comparison of passing touchdowns to interceptions. There were 67 touchdowns compared to a whopping 216 interceptions. Those statistics result in a league-wide NFL passer rating of 29.2. Yes, the sophisticated passing games of today had a long way to go. Every team threw at least fifteen interceptions with the Chicago Bears,   a league high 35 picks, although it didn’t hamper the Bears in the win-loss column as they finished the season with a 9-3 record.

Looking at the top five passers in the NFL in 1936 only Arnie Herber, the seven year vet of the Green Bay Packers, belongs in the discussion for MVP. Leading the Pack to the Eastern Division title with a 10-1-1 was heads-and-shoulders above all the other quarterbacks in the NFL in 1936. in completions (77), attempts (173), passing yards (1,239) and passing touchdowns (11), the future Hall of Famer Herber did have the benefit of throwing to the great Don Hutson (who was playing in his second year in the NFL) as nearly half of his completions and yards went to Hutson, as well as eight of his eleven touchdown passes.
As for Hutson, he did lead the NFL in receiving, but wasn’t challenged very much for that spot because of the lack of passing success of the other NFL teams in 1936.

Hutson was tops in receptions (34), receiving yards (536) and receiving touchdowns with eight. He added another score on a punt to give him nine total touchdowns, which was tops in the NFL. But this wasn’t one of Hutson’s more dominate years, as the thirty-four catches would be the third lowest of his eleven year career and the 536 receiving yards the second lowest- behind his rookie year of 420. Although Hutson would have been in the discussion for league MVP as the game’s best receiving threat, in 1936 it was not his time.


The running backs around the NFL in 1936 featured a who’s who of of Fame ball carriers. Each NFL team had a pretty dominate runner. The top five rushers from 1936, which featured three future Hall of Famers, did not include the Bears’ Bronko Nagurski (529 rushing yards on 122 carries, 4.3 , 3 TDs) and the Packers’ Clarke Hinkle (476 rushing yards on 10 carries, 4.8 , 5 TDs).

Giants rookie running back Tuffy Leemans, who Wellington Mara drafted as a second round pick out of George Washington, was a workhorse in 1936 leading the NFL in rushing with 830 yards on a league high 206 carries. But his work load hurts him here as he was the only player in the NFL to have over 200 carries, plus he only scored two touchdowns all season for a Giants team that finished with a losing record of 5-6-1. Side note here about Leemans, after rushing for 830 yards as a rookie over his next seven years he never gained more than 474 yards in a single season.

Cliff Battles had a solid season with 614 yards rushing and 7 total touchdowns as he contributed in the kick return game too for the Eastern champions Boston Redskins. But it was the Lions backfield that grabbed all the headlines. Fullback Ace Gutowsky (827 rushing yards on 191 attempts) and Erine Caddel (580 rushing yards on just 91 carries) gave the Lions a great one-two punch of power and speed. averaged an amazing 6.4 yards per carry, tops in the NFL while Gutowsky finished second in the league in rushing yards (827) and touchdown runs (6). But the Lions weren’t finished there, they also had the best all-around player in the NFL in their backfield too: Dutch Clark. Running Potsy Clark’s single wing offense from the tailback position Dutch was at his best in 1936.


Clark called all the plays from the field and in 1936 he called his number not as often as you think. He rushed for 628 yards, 3 in the NFL, but it was done on just 123 rushing attempts. His average just behind at 5.1 yards per carry and his 7 rushing touchdowns tops in the league.
Clark was the best back in a crowded backfield. The Lions rushed for NFL record of 2,885 yards in twelve games (averaging 240 yards per game). The record would last for 36 years when the undefeated 1972 Dolphins rushed for 2,960 yards. They set this record on 591 rushing attempts (averaged 4.9 yards per carry) with Clark getting only 123 of those carries, about twenty percent of the time did he carry the ball. Compares that with his teammate Gutowsky (191 carries) getting the ball 32 percent of the time, or the Giants Leemans who had 206 of the Giants 517 carries, a nearly 40 percent clip. 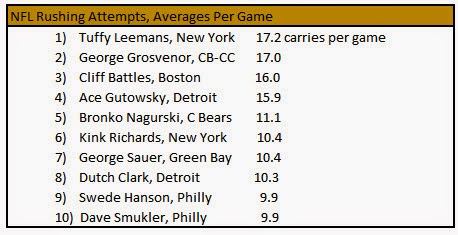 Dutch not only handled the offense, he was the best kicker in the league too, leading the NFL in scoring with 73 points- behind four field goals and a league leading 19 extra points.

The thirty year-old Clark played the entire 1936 season at the highest level. He scored a point in every game, including an incredible stretch where the Lions played three games in eight days TWICE during the season. Games on October 11 (Philly), Oct. 14 (Brooklyn) and Oct. 18 (Green Bay) and again later in the year on Nov. 25 (Green Bay), Thanksgiving Day on Nov. 29 (Bears) and Dec. 2 (Bears). He was never better than those three games in late November. He scored a touchdown in all three games, kicked one field goal and four extra points. Against the Bears on Thanksgiving Day (Nov. 26) sprinted 51-yards for the deciding touchdown in a 14-7 victory, sending Lions’ fans home happy on Turkey day.
Clark held up throughout the season by putting together a remarkable resume, leading the NFL in scoring (73 points), third in the league in rushing (628 yards), and he was also tops in the league in passing percentage with a mark of 53.5 percent. Although he only completed 38 of 71 passes, for 467 yards and four touchdowns, he was highly efficient throwing the ball. He only had six interceptions, which paled in comparison to the massive totals of the other quarterbacks in the league.  Clark was also the better defender than Herber, Leemans and Gutowsky (but not better than Nagurski).
The race for the 1936 MVP comes down to Herber and Clark. was the best quarterback in the league, topping all passing categories and leading the Packers to a 10-1-1 record, as well as leading the highest scoring offense in the NFL (248 points). Although the Packers did win the NFL Championship in 1936 that doesn’t get recognized because the MVP is usually announced before the championship games or is played, so will keep to that schedule.