Fifteen years ago Stats, Inc. a great set of yearly publications that were full of interesting and relevant stats that could entertain a reader for hours. One  was their two- and three-year windows look back at what a team did  32-game spans, rather than 16.  piqued my interest, and in this post, I want to update on one of my favorite lists from that volume while correcting a couple of errors.
As you can see Stats listed the teams with the lowest yard per rush over a two-season span. On top, the San Diego Chargers sit, this would have been the impetus for the article, though not a dominant pass rushing unit, they were a brick wall to run at 1998 and 1999, allowing just 2.9 yards a rush.

You can see the Texans and Patriots circled in the second and fifth slots, respectively, with averages of 3.01 and 3.09. However, there was a statistical anomaly in how the American Football League handed  for losses on quarterbacks, what are now call  As a result every AFL team had " in "stopping the run", that is if they could sack the  a lot because the totals were simply lumped together. That was the case with Texas and the Bills and the Patriots and one  team that appeared on the Stats, Inc., . So, with the sack yardage taken back out of the equation they all much lower in this list, leaving the Buffalo Bills and the great Tom Sestak and Ron McDole as the top on this list at 6th and 7th. 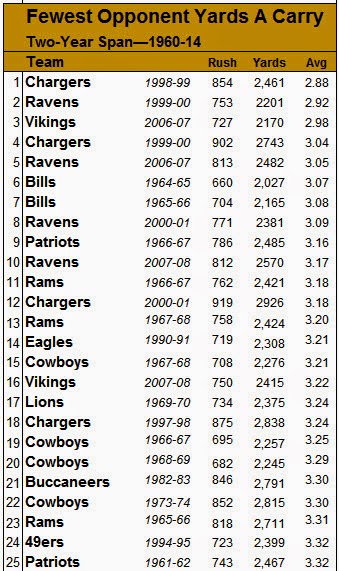 Those same Chargers hold the top of the list, joined by the 1999-2000 Ravens and the 2006-2007 Minnesota Vikings led by the Williams Wall, Kevin and Pat Williams. The 1964-66 Bills held fast, as they truly were one of best all-around defensive lines who could stop the run and get to the passer with . The same can be said about the 1966-67 Patriots who appear high on similar lists that concern sacks.

The Los Angeles Rams Fearsome Foursome has three appearances, Dallas's Doomsday D  on  four times. For a team that makes appearance, the 1991 Eagles sure made an impression with Reggie White, Jerome Brown and Clyde Simmons. 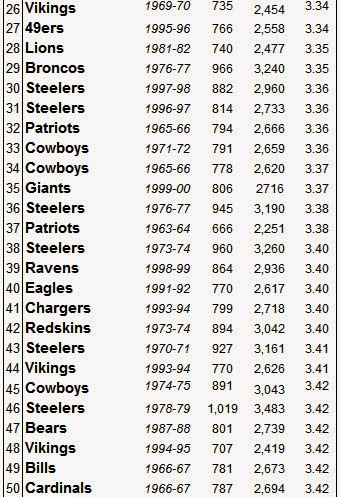 The next set still many greats that allowed 3.34 yards a carry to 3.42 yards per carry over 16 games. At 26 is the People ,  by three helpings of the Denver Broncos Orange Crush Defense, with more iterations of the and the Pittsburgh Steelers appear for the first time, featuring Mean Joe Greene, LC Greenwood, Fats Holmes and Dwight "Mad Dog" White and as the reader will see, it's not their last appearance. 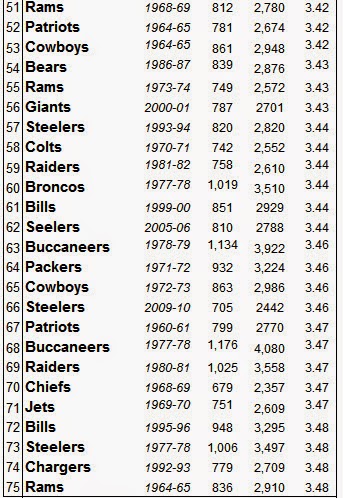 Taking the list to 75 brings more Rams from the 1960s and 1970s and lots of Steelers from the same era. At 47 and 54 we see the only mentions of the Chicago Bears, the dominate defense of the 1980s, which  me enough to double check the research. But, they would have had a few more if this were a top 100 list.