The Birth of Football's Modern 4-3 Defense

The NFL's linebacker was? Sam Huff? It has been written that Landry was the coach who first used the 4-3 defense when Huff was a rookie. Some in Chicagoland Bill George as the first middle linebacker. In Detroit the partisans have stated that it was Joe Schmidt.

What if it is none of them? Those three were voted to the Pro Football Hall of Fame All-D team of the 1950s and all were well deserved. But was there someone else who was the linebacker who has not received the same accolades as the Big Three of the 1950s?

Pro Football Journal writer T.J. Troup has written the definitive work on the matterThe Birth of Football's Modern 4-3 Defense: The Seven Seasons That Changed the NFL. 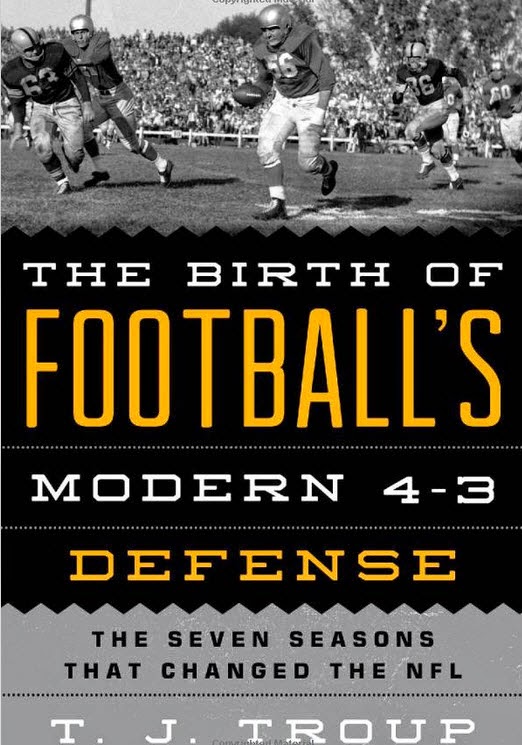 Troup has pored over game film from nearly every team and every season for his magnum opus. From 1953 to 1959, professional football’s offensive and defensive tactics were in a transitional phase. Teams developed innovative strategies to attack the standard 5-2-4 defense and in doing so passing efficiency improved and offenses like the Los Angeles Rams' point-a minute-offense and the Browns dominant running and passing thrived. In an attempt to counter this passing success, the 4-3-4 defense evolved. This crucial shift in strategies is often overlooked in histories of the NFL, yet its impact on the game is still seen today.

Do yourself a favor, if you are interested in the strategy of the game and enjoy detailed accounts of the great games of the 1950s, go get this book. It can be found here.
Posted by John Turney at 2:54 PM