One Piece of the Greatness of Patrick Willis

When I first saw Patrick Willis play for the San Francisco 49ers there was only one player who came to my mind as a comparable talent—Ray Lewis. Hyperbole? No. Stylistically, physically, mentally, he was the most similar player I could think of. Over the course of the years that have passed, little has changed this impression in my mind. To me, the most obvious similarity is the combination of the anticipation to know where to make a play and the ferocity with which they each arrived making that play.
Ray Lewis exploded on the scene in 1996 with an immediate impact, albeit on a poor Raven team, just as Willis would years later. Then, slowly, the Raven defense built around Lewis to become one of the best of all-time. Similarly, the 49ers built around their strongest asset: Willis, to build a defense that—were it not for their neighbors up North—would certainly be considered among the best of the decade.

In the year prior to reaching his crescendo as a Super Bowl champion, Ray Lewis posted one of the most extraordinary of all-time. He had seven pass stuffs during the 1999 season, seven times in a single season, from his linebacker position, Lewis was able to tackle a player who caught a pass behind the line of scrimmage—a pass "stuff".

Dating back to 1982, this was the first time a figure of this high was posted. And, that figure stood for just under two decades until DeAndre Levy tied it 2014. To what degree was this a historical ?  Here are the pass stuff leaders for every year of the past two decades:

Lewis’ seven was an absolute amongst a series of four pass stuff leaders. And while Willis appears only once as a single-season leader, his year-in-year-out consistency his career pass are in excess of any linebacker to play in the past twenty years—a list that includes many of the recent greats at the position. will miss you,  Patrick Willis, the Hall of Fame awaits. 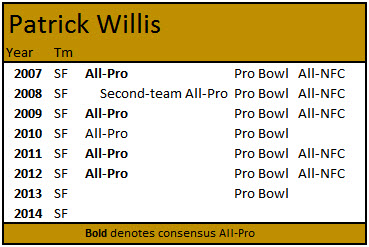