The Christian Apostle Matthew was probably not talking about the Pro Football Hall of Fame or players in NFL history with the most sacks as an outside linebacker, but in this case, the quote may be fitting if things go in Kevin Greene's favor the Saturday before the upcoming Super Bowl.

In 1999 the first " was inducted into the Pro Football Hall of Fame, the "G.O.A.T" i.e greatest of all time Lawrence Taylor. He was perhaps not the first outside linebacker who was a  rusher, but he is the one who is credited with changing the game in terms of blocking schemes and how teams prepared for the likes of Taylor.

Taylor himself credits Bill Parcells as the creator of the position, in 1984. The first few years of Taylor's career, he was an all-around LBer, dropping into coverage about 45% of the time and in 1983, due to injuries, played some inside linebacker. In 1984, Parcells thought he was just wasting Taylor on early downs, where teams would throw, so he essentially turned Taylor into a defensive end. Leonard Marshall echoed that  his book, and said 'LT was basically a defensive end, and I was essentially a defensive tackle in our scheme". Whether linebacker, defensive end or there have been many players essentially doing the same thing on the field: getting after the quarterback the vast majority of the time and mixing in coverage .

Beginning in 2008 there were several of these or "edge rushers" plus a couple of outstanding defensive ends that were popping up on Hall of Fame Final 15 lists and they  to be inducted, seemingly every year, as they should have been, all were deserving.

In 2008 Andre Tippett, as well as defensive end/designated pass rusher Fred Dean, were both elected, in 2009 Derrick Thomas (and lock Bruce Smith) were voted in, Rickey Jackson was next in 2010,. In 2011 defensive end Richard Dent was inducted and the following year it was Chris Doleman's turn. Then it was inside rusher Warren Sapp's turn and 2014,  Michael Strahan was the "edge rusher" of the year. Last year, it was  and he was voted the Hall.

all those years  Kevin Greene, who had more sacks that any of those players. Certainly, sacks are not the only measure, not even Greene would argue that he knows position, no matter the name, is about stopping the run and playing coverage (man or zone) were required. But it is certainly of note that some of those  played as long as Greene and were honored as All-pro and Pro Bowlers the same or even fewer times than Greene and got to the quarterback fewer times than Greene were inducted ahead of him. Certainly, part of it is that Greene isn't really a Ram or a Steeler or a Panther or a 49er, he's part of all of them and they are all part of him.

However, 2016 will possibly change that, though it is never a sure thing. Voters have published thoughts about Greene over the years few, if any, spoke of any kind of flaw in Greene's career, just that they had to order the edge rushers and the other players up against Greene was also qualified and in each instance, they got the call before Greene. So, if those words hold up it could be Greene's year to don the Gold Jacket.

Now that Greene is again the Final 15 list, it may be interesting to look a little closer at Greene's career to see some of the nuggets that make him special, in a group of special players, aside from his sack total. He had plenty of challenges, scheme changes, new positions to learn and yes, even contract disputes which led to changing teams before it had become common and accepted practice for a player.

Perhaps the best way to look at his career is , as that will afford a  of the  schemes Greene played in and hurdles cleared.

Synopsis
Greene was drafted as  by the Los Angeles Rams in 1985 and that season he spent most of his time as a core special-teamer, playing on all the special teams, However, after  Greene was showing enough to defensive coordinator Fritz Shurmur that he would be inserted as a left defensive end in the Rams sub packages (nickel and dime). Sometimes he was an end in a 3-man nickel or a 40 nickel, with Doug Reed reducing as a defensive tackle. He had a few did not record a sack until the opening round of the playoffs versus Dallas.

In 1986 and 1987 Greene mostly filled that same role as the nickel left end, and both seasons he  second to Gary Jeter in sacks for the Rams, though there were times he played the right end in the nickel and also spelled starting linebackers Mel Owens and Mike Wilcher. 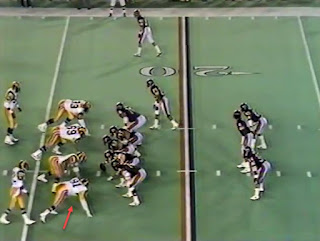 The following clip illustrates his main role for the Rams those two years. Rams are in a 4-1-6 with Greene at left end. He and Doug Reed sack the quarterback. One note, the official play-by-play does not credit Greene with 1/2 of the sack. It is shared by Reed (#93) who does deserve 1/2 of the sack and Shawn Miller (#98, who fell on the pile late) with 1/2 a sack. The scoring was never challenged by the Rams, so Greene never got credit for this 1/2 sack.
1988 brought a change, John Robinson wanted to have a more aggressive approach and there were some injuries to down linemen, so Fritz Shurmur employed the "Eagle" defense, which, essentially, was a clone of the Bears 46   used -linebackers and 2 down linemen in his package rather than the four defensive linemen and three linebackers the Bears used. The Rams deployed that scheme, along with their base 3-4 and sometimes even a "Big Nickle" for the next three seasons, through 1990.

One pro scouting firm had Greene rated as the best of the  in 1988 and third best in 1989, And the next clip gives a good example Greene and his role in the Eagle and Hawk defenses. The difference is where -backer (yes nose-backer) Fred Strickland lines up. If he is over the center it's Eagle. If he lines up as a linebacker or stems from nose to linebacker it's the Hawk. In either case, the goal is to have Greene matched up on a tight end or back, rather than a tackle, and in this game, it worked well.

In the role of LOLB in the Eagle (and variant the Hawk as well as their base) Greene was able to rush wide and used his abilities to harass quarterbacks. He led the Rams with 16-1/2 sacks in 1988 and 1989 and had 13 sacks in 1990 for 46 over that three-year period, more than anyone in the NFL.

In 1991 John Robinson wanted to make another change in his defense and this time he dismissed defensive  Fritz Shurmur and hired young up-and-comer Jeff Fisher to run the defense, promising more man-to-man coverage while still  an aggressive rush. Fisher installed a 4-3 but it relied heavily on the 46 defense, which he played in Chicago as a player and used in Philadelphia under Buddy Ryan. However, in 1991 it just didn't work.

First, the Rams lacked linemen to play that scheme, picking up Plan B free agents to  positions that with the Bears and Eagles were played by the likes of Dan Hampton, Richard Dent, Reggie White, Jerome Brown, etc. Greene was the only legitimate star Fisher had to work with and it wasn't enough Then, injuries decimated the defensive linemen he had, forcing him to go to the free agent wires to fill out the roster.

Greene bounced from defensive end to linebacker back to defensive end. He still led the Rams in sacks with a paltry 3, but he did have a lot of hurries. But, it was a miserable experience. I

n fairness, Greene didn't have to change positions as much as the moniker of "defensive end" suggests. Greene spent most of his snaps in a two-point stance in the Bear front and often did the same in nickel.

This Greene's adjustment wasn't a huge one, but with the kind of players and the number of injuries the Rams had in 1991 it ended after one year as noth Robinson and Fisher left the Rams after the season.

That brought in 1992, with Chuck Knox and defensive coordinator George Dyer. The R kept the 4-3 made Greene a base 4-3 linebacker that moved to LDE, usually, in . In that role, he had to cover more than he ever had, and even had to play stacked linebacker. He led the Rams in tackles and sacks and was named All-Pro by Paul Zimmerman, who cited Greene's coverage ability, "The (other) OLB spot was between Seth Joyner .  the Rams' Kevin Greene. I picked Greene. He had more coverage responsibility than ever before, and he did just fine."

Below are a few screenshots of where Greene lined up in the base defense. These are posts that you likely would not have found a Haley or Tippett or Jackson, et al.
Greene was free to sign as a free agent in 1993 and he chose a team that suited his skills best, the Pittsburgh Steelers and their 3-4 defense. He excelled there, making All-Pro and Pro Bowl, played in a Super Bowl, led the NFL in sacks.

Fortunately, Elias Sports Bureau would review them if the coaching staff requested it and this sack was eventually credited to Greene, the "Crawling sack"
defensive coach Dick LeBeau said, "Kevin Greene is a great player against the run and of the best pass rushers in NFL history. He is almost ."

Greene was a free agent again in 1996, and signed  expansion Panther head coach  Capers, his defensive coordinator in Pittsburgh and won another sack title, NEA Defensive Player of the Year and just missed going to the Super Bowl.

In 1997 Greene was lured to the 49ers by a big contract, but it lasted only one year where he was the "elephant" in the 49ers defense, (a catchy name for a designated pass rusher role) and he had 10.5 sacks and where he officially broke L.T.'s  record for sacks by a linebacker. [Note: my view Greene broke L.T's record the following year because L.T. 9-1/2 sacks as a rookie, bringing his total to 142, but that is another can of worms]

1998 brought Greene back to the Panthers where, at age 36, he had 15 sacks and garnered more post-season honors as a starter in the Panthers familiar 3-4 defense.

In 1999 the Panthers switched defensive schemes to a 4-3, one v much like he played 1992 for the Rams, where he was a base LLB and was a pass  on downs. He ended the season with 12 sacks and 7.5 stuffs, the seventh time in his career he had 18.5 or more sacks and stuffs combined and the tenth time he amassed 10 or more sacks in a season.

In a recent interview given to the Talk of Fame Sports Network Greene said, “I was an outside linebacker in a 3-4, so I actually had coverage responsibilities. So my rush was more limited (than a defensive end). But, still, I think my numbers match up pretty good, even with those that rushed the passer every passing down." He also added that he feels like his production was surpassed by none and "My nutritional habits, my sleep habits, my workout habits, my practice habits, my study habits were all thoroughly thought out and planned to be the best that I could be".

Here is a list of Greene's honors, year-by-year
ALL-PRO

Here are Greene's career stats:
In addition to his sacks, Greene forced and recovered lots of fumbles, had fifty passes defensed and had 63 run stuffs and scored on defense six times (three touchdowns and three safeties).

So, the Sunday before Super Bowl 50, Greene will know his fate and we will all learn if the linebacker first in sacks with 160 (or is it 160.5?) will be the last of his contemporaries to be voted into the Pro Football Hall of Fame.
Posted by John Turney at 4:54 PM