The Safety Dance: A Look at Some of the Better Safeties of the Last Three Decades

LOOKING BACK
By John Turney
Hall of Fame voter Rick Gosselin has written that safeties are underrepresented in the Pro Football Hall of Fame and that seems to be true. Three extremely strong candidates are up or will be up soon. Brian Dawkins is eligible now, Ed Reed will be in 2019 and  Troy Polamalu is eligible in 2010. All three should get in soon, in fact, Reed and Polamalu are likely first-ballot types, Reed especially.

John Lynch is also eligible but his credentials, while fine, are not in the class of Reed, Dawkins, and Polamalu. But he, too, should get in. However, there are quite a lot of fine safeties that have played since the late-1978 and while not all are HOFer, some are members of the Hall of Very Good and others likely will be in the near future.

Here is a chart (cling to enlarge) showing a basic comparison of the honors won by a select group of safeties. 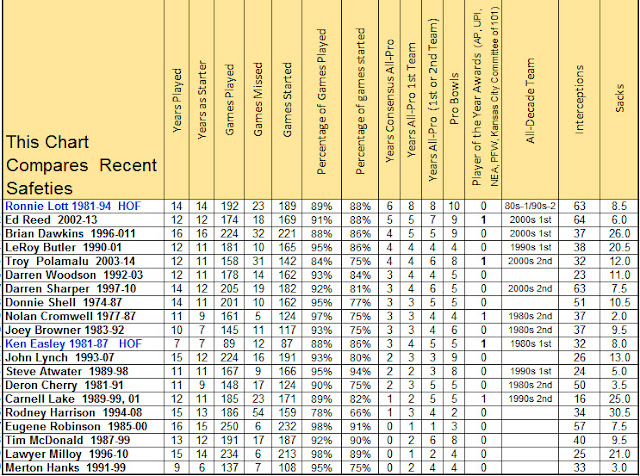 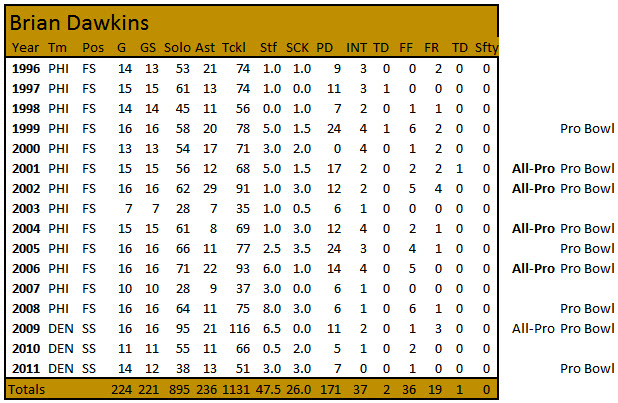 The only knock on Dawkins, and it is not much of one, is that he didn't pick off a lot of passes—relatively speaking. He never had more than four in a season and finished with 37 career picks. However, he could do it all, cover, blitz, tackle, had great range. The key stats to us are the 26 sacks and 36 forced fumbles which are huge for a safety as is his 47.5 tackles for loss (stuffs). Were we to guess we think Dawkins gets voted into the Hall of Fame this upcoming February with the Class of 2018.

We think Ed Reed is the best free safety of all time, though some would disagree. He had such range and instincts and made so many plays that the case is there for him being the G.O.A.T (greatest of all-time) but we will see in two years is the Hall of Fame selection committee agrees by making him one of the few safeties voted in on the first-ballot. At that point, the debates can begin. 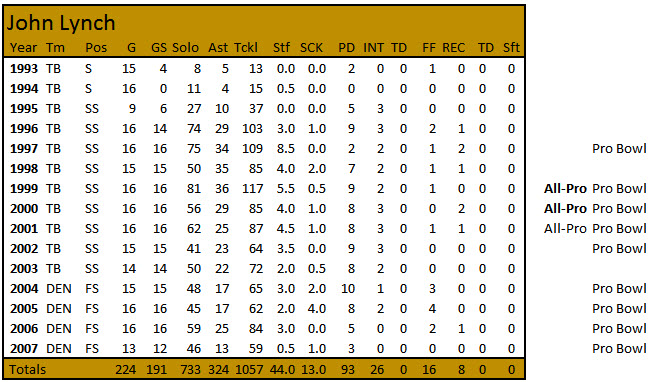 John Lynch has been close to getting into the Hall of Fame having been on the Final 15 list a few times. Lynch pickod off 26 passes (low for a safety) but had 44.0 stuffs which is excellent and add in 13.0 sacks to that for a total of 57.0 plays behind the line of scrimmage. 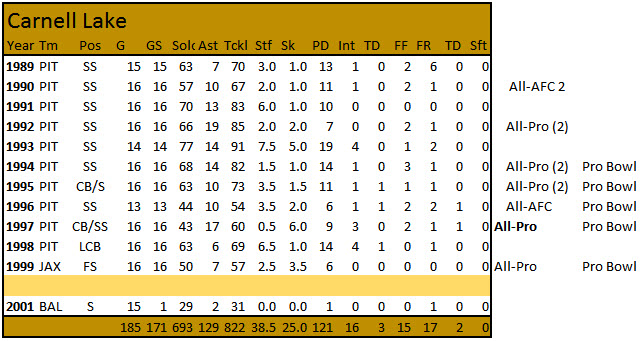 Carnell Lake's career is haLake is hard to evaluate since he was so versatile and spent about two-and-a-half years as a cornerback and was a good one at that. He was generally an in-the-box-safety, making plays around the line of scrimmage. He was a First- or Second-team All-Pro five times and got post-season honors in seven seasons and was voted the the1990s All-Decade team as one of the Second-team safeties. He was certainly a fun player to watch since he was around the action so much. 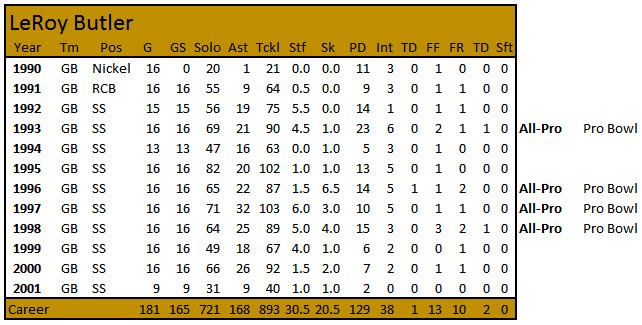 Like Carnell Lake, LeRoy Butler could to a lot from his strong safety position. Also like Lake, Butler played some cornerback and again, like Lake he made a lot of plays around and behind the line of scrimmage. In addition, though, Butler picked off passes (38). Not quite the number of Donnie Shell the record holder for strong safeties, but still, a goodly number.

No offense to Ronnie Lott but he didn't belong on the 1990s All-Decade Team, even if it was a Second-team selection. A better choice would have been Darren Woodson. Lott only played have he decade and his years with the Jets were average, at best. Woodson was right there with Butler and Lake as a playmaking strong safety and was part of the Cowboys championship runs. He was also a noted special teams player.

Steve Atwater gets a lot of HOF notice and for good reason. He is aided by having a signature play which is his hit on Christian Okoye of the Kansas City Chiefs on Monday Night Football September 17, 1990. However, our personal favorite was his point-blank interception, of Jay Schroeder in 1989. Shroeder fired a pass and Atwater instantly put both hands up an stabbed the ball at what looked to be a distance of five or so yards. To us, that is his second "signature play".

He only picked off 24 passes and had only 5 sacks (low compared to his contemporaries but did have 38.0 which is a good number. 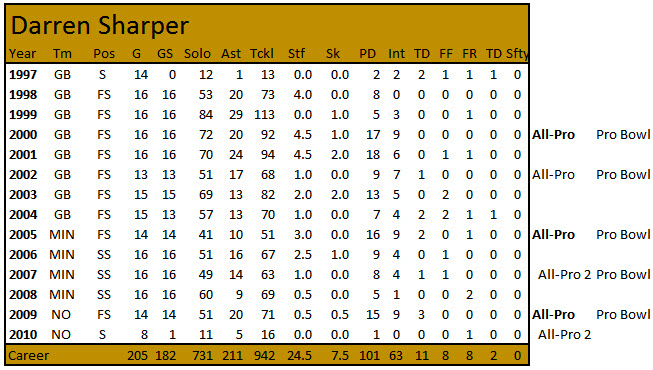 Darren Sharper is persona non grata for being sentenced to almost two decades in prison in a case in which he was accused of drugging and raping multiple women in multiple states. Although Hall of Fame by-laws prevent holding off-the-field actions against a candidate. That may be true, but Sharper won't ever get enough votes to be on the Semi-finalist list. There are just too many other good candidates to waste time with this guy. 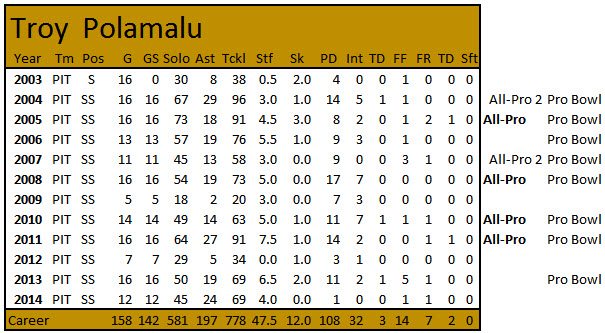 Troy Polamalu was an exciting player, the epitome of an in-the-box safety who was the AP NFL Defensive Player of the Year in 2010 and his 2008 season was just as good. He should have no trouble being inducted into the Hall of Fame. 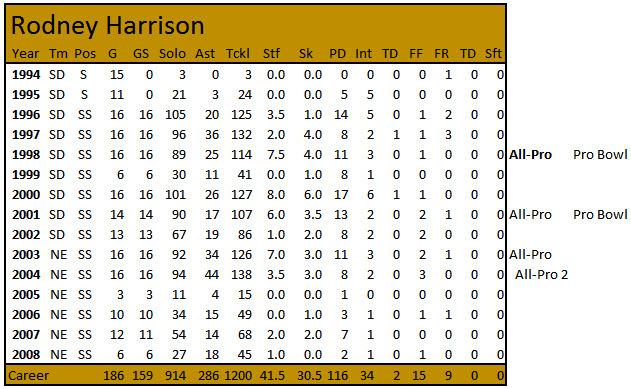 Rodney Harrison is an interesting case. When you look at his numbers you ask why he wasn't All-Pro more. In 2000 he had 127 tackles, eight for a loss, six sacks and six interceptions (one going for a score) and defended 17 passes. It's hard for a strong safety to get more big plays in a season than that. And as a result, he wasn' as much as All-AFC or a Pro Bowler, much less a First- or Second-team All-Pro. Perhaps he had a reputation amongst voters for being a cheap-shot artist. True or not true, Harrison was a fine strong safety was solid in all aspects of the game. 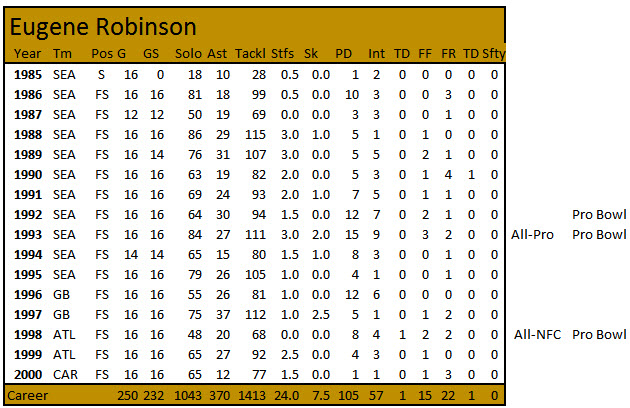 Maybe the most underrated free safety of his era was Eugene Robinson. He didn't get many post-season honors but according to one pro scouting firm  thought he was the best free safety in the NFL in the 1990s. 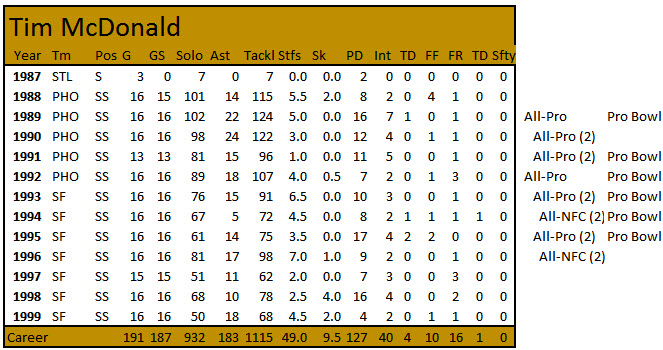 Tim McDonald was All-Pro twice, though neither consensus, and got post-season honors eight times. He was not the classic in-the-box strong safety, playing deep as often as he moved down and was productive at both spots—totaling 49 stuffs and 40 interceptions. 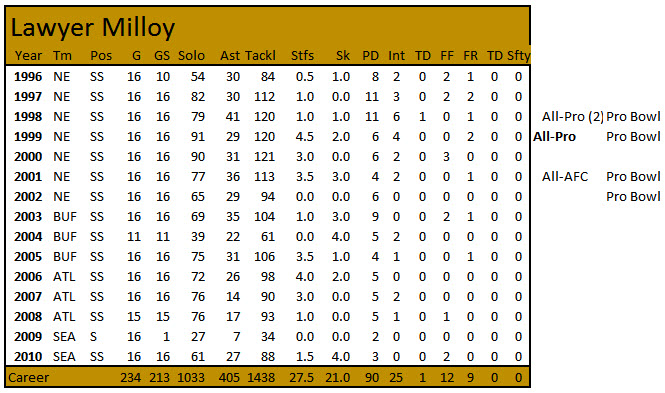 Lawyer Milloy was replaced by the Patriots by Rodney Harrison after quite a few very good seasons. With the Pats Milloy got post-season honors four times and helped them win their first Super Bowl, playing a part in slowing down the Rams Greatest Show on Turf.

Hanks had a short career and like Carnell Lake and LeRoy Butler played some cornerback. His peak was from 1994-97 when he picked off 22 passes in those four years and went to four Pro Bowls. 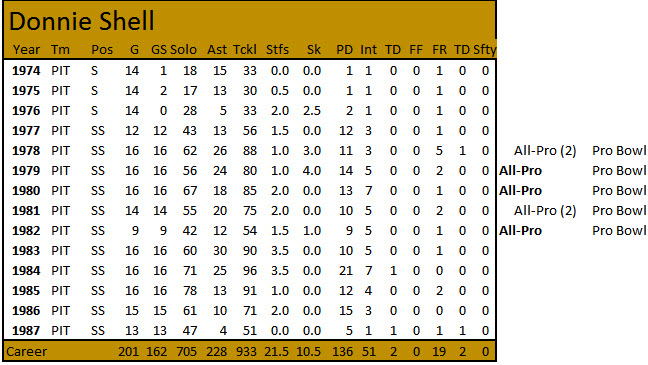 Mike Giddings has always stated that he does not have higher grades on any strong safety during his time than Donnie Shell. he was "always blue" according to them. Even after his All-Pro run, he was highly productive from 1983-86 picking off 19 passes. Early in his career he was a special teams demon and worked will in the Steelers sub packages in 1976 as a blitzing safety. He was a hard-hitting safety with lots of range.

Nolan Cromwell was on his way to the Hall of Fame until a knee injury in 1984 felled him. He came back in 1985 but was never the same playmaker that he had been from 1979-84. In those early years there likely has not been a free safety with more range, leaping ability, instincts and ball skills. He was a good hitter and even better tackler. Under Bud Carson's Cover-2 he was able to cover half the field with relative ease and in the sub-packages could play cornerback and run the routes better than the wide receivers he was covering. In 1983 he moved to strong safety and was Second-team All-Pro and made his fourth Pro Bowl. But, as Howard Cosell used to say "th-e kn-ee, al-ways th-e kn-ee".

Browner is yet another safety that began his career as a corner and special teams maven who moved to safety. Browner liked to tackle players by grabbing them with his extraordinary strong hands and throwing them to the turf in violent fashion.

Deron Cherry may have been the best ball-hawking safety of the 1980s, even including Ronnie Lott. From 1983-86 he snagged 30 passes. Our favorite year of his may have been 1988 when he picked off seven passes and covered six fumbles for a total of 13 turnovers. 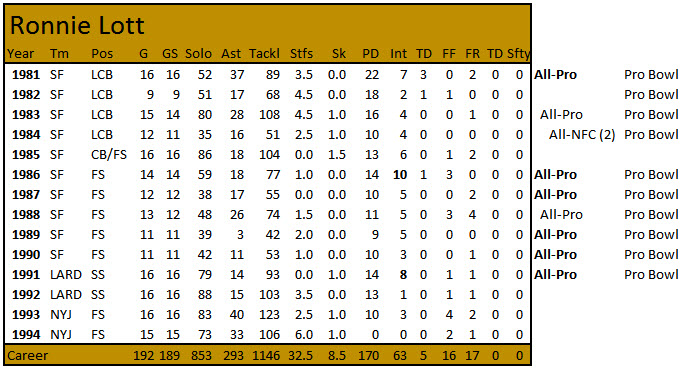 Not much need be said about Ronnie Lott. A first-ballot Hall of Famer, an eight-time All-Pro (six consensus) and 10 Pro Bowls. he began as a corner from 1981-84, even though he was the corner in the base defense and would move to free safety in nickel and dime defenses. Later in his career he moved to strong safety with the Raiders and have a superlative season for them in 1991.

Easley was just inducted into the Hall of Fame. Even though he had a short career he was a dominant player. He was a hard hitter and had good range, in fact, he'd have likely been a HOF free safety had he been asked to play away from the tight end.
Posted by John Turney at 8:58 PM