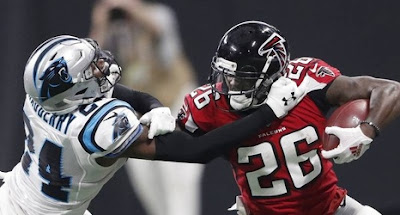 Another terrific week of Pro Football and today's Tuesday Tidbits the topic is running the ball for 100 yards. When the Atlanta Falcons don't have a 100 yard rusher they wins 36% of the time. When they do, they win 71% of the time!

Sunday was a classic example as Tevin Coleman gained 107 yards in the victory over Carolina. This was not the first time a Falcon has gained over 100 against the Panthers; in fact Atlanta's record when having a 100 yard rusher against them is a sterling 11-3!

Next, we are headed out West for the confrontation between San Francisco and Detroit. Now that we have eight divisions there are teams that just don't play as often as they use to. Once upon a time (no, this is not a bedtime story) there was a consistently hard-fought rivalry between Detroit and San Francisco (1950 through 1966). 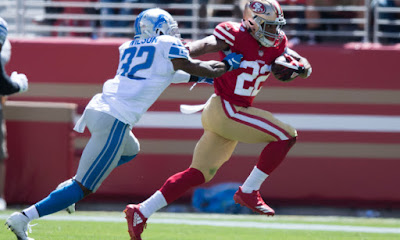 The 49ers have had many outstanding runners; in fact some Hall of Fame runners thus the title "Lugging the Leather". When the Niners don't have a 100-yard rusher against Detroit their record is 24-25-1, but when they do—a dominating 14-3 record including Matt Breida's powerhouse performance Sunday afternoon in the California sunshine. See ya next week.
Posted by TJ Troup at 4:43 AM