In terms of the move from St. Louis to Los Angeles Rams COO Kevin Demoff had to say and do a lot of things for owner Stan Kroenke. That is what his job is. That entails spinning, dissembling, engaging in prevarications, and yes lying.

And every one of us would do that if we were paid that kind of money to be the spokesperson of a high-profile organization that was leaving a city under somewhat shady circumstances (that have landed that organization in court). I would, you would. 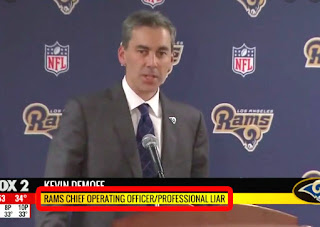 So, I think it was unfair for the Fox 2 employee in St/ Louis to put that graphic on the screen calling Demoff a professional liar.

If an executive at GM were closing a plant in the rust belt and moving to Mexico or elsewhere and the plans were not yet final, that their right, though many might not think it is savory, they are under no legal or even moral obligation to announce it before all the "ts" are crossed and all the "is" are dotted.

Same is the case with Demoff and the move to Los Angeles.

If we were in Stan Kroenke's shoes, with an option to but the Rams at less than $750 million (acutally less than that as his 1995 buy-in portion had appreciated over 15 years)  and had a chance to move them to another city where the value will instantly double and eventually quintuple (or more) we'd do it in a heartbeat and we'd pay someone like Demoff to be our flack.

So, yeah, I'd work for Kroenke and I'd do what Demoff did in the St. Louis move.

What I would never do is debauch the Rams horn which Demoff did.

All those things are part of the business of the NFL.

Taking something Demoff himself said was "sacrosanct" (synonyms—sacred, hallowed, respected, inviolate) and he allowed it to be violated.

Oh sure, he says it's the same horn, just "modernized". But this time the lies are not justifiable. They are to cover his ass. To justify a terrible decision. To try and placate disillusion fans who trusted his words when he said the horn was "sacrosanct".

Arash Markazi, a columnist for the Los Angeles Times called Demoff out on this foolishness.

The slap in the face, the sacrilege is that the horn now on the Ram helmet for the next five years in not even a Ram horn. It's a wave. Just read the Rams own literature— 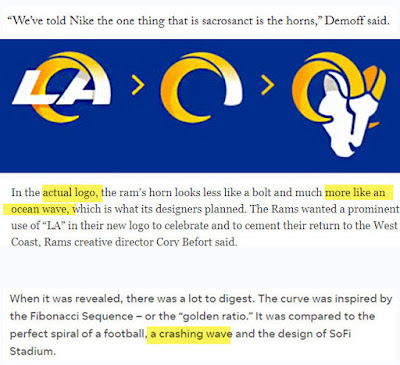 When the logo was revealed fans were hot. They said it looked like the Chargers, a "bolt". No, said the Rams when you get good look fans will see it looks "more like an ocean wave, which is what the designers planned. 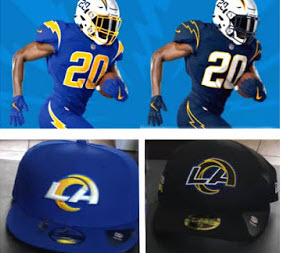 The reveal of the logo buttressed that saying the curve of the so-called horn was inspired bu the Fibonacci sequence, a spiral of a football, a crashing wave . . ."

Throw in that the bone color is supposed to be a combination of the color of the sand on the Los Angeles beaches and the color of a Ram horn (which is not bone, by the way, it's more like fingernail material).

Add to which there is a sunburst on the light grey uniforms the Rams call "bone" and the blue numerals have what look to be waves in them and also the logo on a yellow field that has the wave-horn on it. You will see there is nothing, other than the nametag that suggests Rams at all.

Eric Dickerson was right. It's beachwear.

At least the blue uniform has the wave-horn on the shoulder.

Back to the horn.

Lots could have been done if they were not so committed to the Ram brass' notion of what "modern" was. Whoever gave them the idea they know what it is and how it could be achieved in good taste is a mystery. They certainly cannot get it from Nike, who has ruined more uniforms in the NFL than John Kruk's chewing tobacco.

I supposed we just have to take their word for it and withstand Demoff's blame game "If you don't like it you're too old" or "you will get used to it in time" or "you need to see it under the right circumstances, in the new stadium with the lighting with the oculus, under a full moon, on the third Sunday in October".

Eric Dickerson said a uniform should look great the moment you see it. He also said the horn should not look like a banana which this wave-horn does.

They could have borrowed Angelo States horn. They borrowed the royal chrome and yellow colors and Angelo State has been borrowing the Rams original and classic horn for years.

The Rams also cribbed off of Angelo State's logo and light grey uniforms so why not go all in and use the horn--it was the LA Ram horn anyway?

If the Rams and Nike insisted on the stupid "broken wave-horn", it could have added and still had the curl shape. Apparently, it was to give a "3D" look, which is doesn't. But compromises can be had. But the horn was supposed to be sacrosanct but it really wasn't. 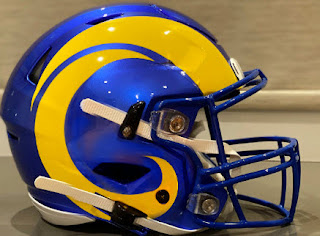 Here you can see the broken wave-horn gives no 3-D affect at all. It's a fail. 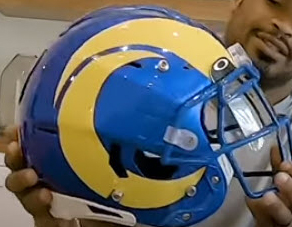 The bottom line is this: The Rams are stuck with the broken wave-horn for a minimum of five years. And sadly, it is not a Ram horn, Ram horns look like this— 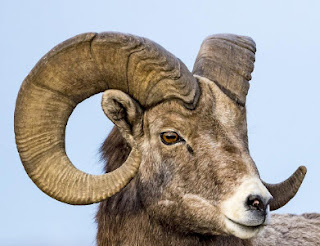 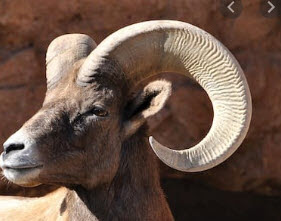 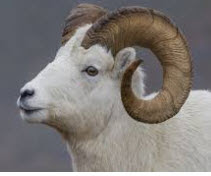 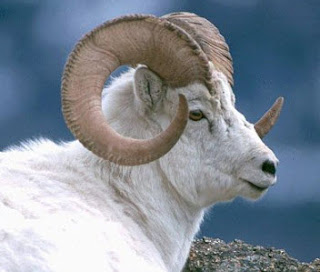 Ram horn curl. The new Los Angeles Rams wave-horn does not curl like a Ram horn. It was not "sacrosanct". It was desecrated on the alter of "newness" and "modernness"  by people who profess those as values but lack the ability to articulate what those values mean. They just say them and expect fans to accept them.

Who do Demoff and Nike and whoever else had a hand in this think they are talking to? The sycophantic LA and Rams media? That same media with the exception of Arash Markazi regurgitates what Demoff says without question or comment? The same LA media that seems to be afraid to lose access to Rams brass or, even worse, doesn't have the sense to know that the team they cover just had its brand, its iconic symbol crapped on by Kevin Demoff?

Why in the world would you change from a universally accepted top five in the NFL helmet (many non-Rams fans think it's the best) and likely one of the top five ever (again, perhaps the best-ever) based on our view and conversations going back decades to a horn that ruins a decent royal metallic-colored helmet? Now, making it likely a bottom five helmet, if not the worst.

Demoff is talking to Rams fans, many of whom became Rams fans because of that horn. What Demoff never got is THAT is what made the horn sacrosanct. It was the genesis for the fanhood of countless members of Rams Nation. And Demoff just blew all that off in the name of, what did Robert Woods call it? “Super modern, super futuristic”?

Good plan. (Sarcasm noted).  How can the COO of a team not know his fan base? How can he divide the fan base by reaching out to one fan base at the expense of another? And that is exactly what is happening. It's very apparent on Twitter and it's nasty. That is Demoff's tin ear at work. 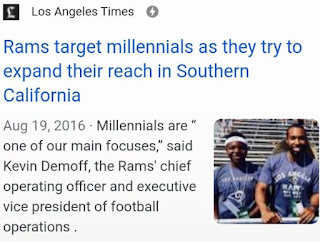 There was a way, in terms of the helmet to do both as we showed in the examples of the helmets with the new colors and even the break in the horn that has the curl. I was never that hard.

No, Demoff didn't do anything wrong when his lies were justified in the St. Louis to Los Angeles move. It's part of the game in billion-dollar business. Information leaking out can cost millions and millions of dollars in added expenses in land, leases and other expenses people like you and I have never even pondered—not to mention upcoming legal expenses.

However, the lie of calling telling Nike that the Ram horn was "sacrosanct" then revealing a wave-horn that was meant to reflect a wave is not a justifiable white lie. It's just a lie.
Posted by John Turney at 10:13 AM