Jeff Nixon Has a Game for the Ages 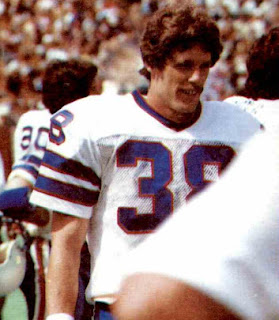 The Buffalo Bills had set a dubious record during the 1970s, losing 20 straight games to the Miami Dolphins during the decade for a standard for futility (or, from the Dolphins perspective, a benchmark of dominance) against one team that will most likely never be surpassed.  But the Bills of 1980 were not only beginning a new decade, they were literally beginning anew--a team on the upswing with several new players and a winning attitude imported along with third-year coach Chuck Knox.  And what better way to kick off the new decade than against the that had completely dominated them throughout the previous one?  This was their chance to make a statement, and they did so emphatically.
Free safety Jeff Nixon was in just his second season with the Bills but was already well aware of the streak that had haunted the team and its fans for a full ten seasons.  “The entire off-season,” he remembered, “all I heard from fans was ‘why can't you guys beat the Dolphins?’ After hearing this countless times, I made it my goal to do everything in my power to end this streak once and for all.  When the league schedule came out, I circled the date on my calendar, September 7, 1980. The home opener, again, in Buffalo.”
No doubt several of those same fans were among the sellout-crowd of 79,598 who jammed into Rich Stadium to witness the battle.  The hometown rooters had little to cheer about until late in the first quarter, when Nixon foiled a Dolphin drive by falling on a Bruce Hardy fumble at the Miami 49. 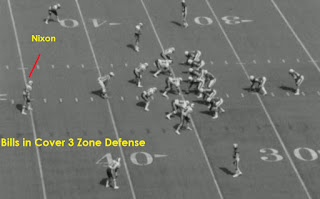 “We were in Covr 3 Zone where I cover the middle and the two cornerbacks cover the deep outside zones,” Nixon explained.  “I came up and was in the right place at the right time.” 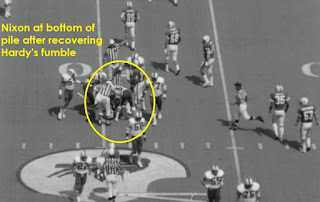 The Richmond grad gave the fans another reason to shout midway through the second when he picked off Bob Griese at the Miami 48. 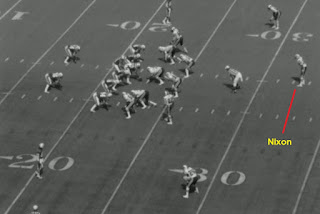 “We were in Cover Two,” he recalled.  “Both safeties (Steve Freeman and me) covering half the field.  The ball was overthrown, and I was able to get my hands under it before it hit the ground.” 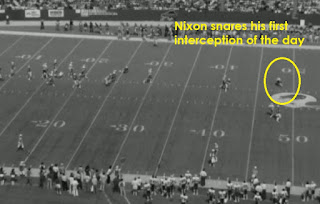 Nixon returned the pick to the Miami 32, which led to a 40-yard Nick Mike-Mayer field goal that gave the Bills a 3-0 lead that stood until intermission.
Fans were cautiously optimistic as the teams emerged from the locker rooms--after all, Bills backers had seen this before.  Just one year earlier, their team had taken a 7-0 lead into the locker room, only to see Tom Dempsey shank a 34-yard field goal on the game's last play to send the Bills to their nineteenth straight loss to the Dolphins.  Something, they thought, was bound to happen to spoil the party.
It appeared those fears were realized early in the third period when Griese hit Tony Nathan with a four-yard scoring pass, lifting the Dolphins into a 7-3 lead.  But Nixon was having none of it.  Later in that same period, he stopped a Miami march by recording his third takeaway of the game when he intercepted Griese at the Buffalo 28, returning it to the 43. 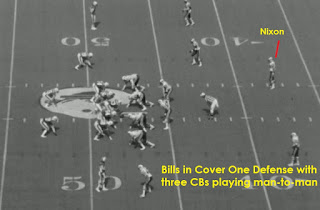 “Interception number three was Cover One where I cover the middle of the field and everyone else is in man-to-man,” he explained.  “I came up to make the tackle, but Jimmy Cefalo bobbled the ball and I was there to make the interception.”  The quarter ended with the Dolphins still leading by four. 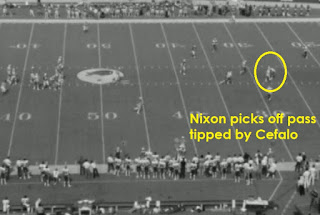 The score remained unchanged as the Bills traded blows with their most bitter rival until late in the fourth quarter, when Ferguson capped a seven-play, 68-yard scoring drive with a four-yard toss to Roosevelt Leaks, giving Buffalo a 10-7 lead with 3:42 left.  The crowd was now on its feet, anxiously awaiting the return of the Miami offense and an inevitable Dolphins comeback.  The ensuing kickoff was returned to the Miami 33, but when the Dolphins took the field, it was Don Strock calling the signals in place of Griese.  Strock's first-down throw was picked off by linebacker Isiah Robertson and returned 33 yards to the Miami 11, giving the Bills a golden opportunity to put the game away.  A short pass to Frank Lewis on third-and-six placed the ball shy of a first down just outside the one-yard line.  Rather than kick the sure field goal that would have extended the lead to six points, coach Knox made an uncharacteristically bold move and went for the knockout punch, leaving the offense on the field to go for the clinching touchdown.  Seconds later, rookie running back Joe Cribbs vaulted into the end zone, sending the crowd erupted.
Miami got the ball back with 1:52 on the clock.  But after driving to the Buffalo 43, Strock made a desperation throw toward the Buffalo end zone. 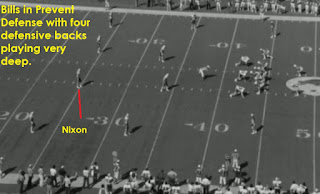 “We were in Prevent Defense," said Nixon.  “All safeties and cornerbacks play deep, covering one-quarter of the field.”  Nixon played it perfectly, anticipating Strock’s aerial near the goal line and out leaping a Miami receiver to notch his fourth swipe of the day. 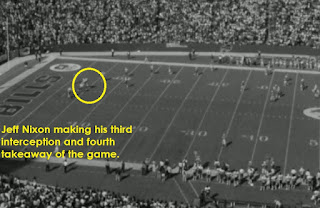 The crowd, sensing that it was witnessing the making of Buffalo sports history, erupted into hysteria.  When the game ended after two Ferguson kneel-downs, the mass of humanity stormed the field to celebrate the momentous occasion.  Overzealous fans descended upon the goalposts, eventually tearing both down and carrying a large section of one-up the stands toward Ralph Wilson's box to present to the team's owner as a souvenir.  "This is the biggest win in the history of the team," an emotional Wilson told reporters.  "Bigger than the AFL championships."
“I intercepted three passes to help end the longest losing streak in NFL history,” Nixon recalled proudly.  “I also had a fumble recovery in the game, giving me four takeaways, which is still a Buffalo Bill's single-game record.”  It fell one sort of the NFL record of five which was set by St. Louis Cardinal Jerry Norton way back in 1961.
For Nixon, however, the thrill of the victory and his own stellar performance was overshadowed by thoughts of his long-suffering teammates.  “For players like Joe DeLamiellure, Reggie McKenzie and Joe Ferguson, who had endured the entire ten years of defeat at the hands of the Dolphins, their emotions had to be something like the Jews experienced when they were finally allowed to go into the promised land after 40 years of wandering in the desert. Well, maybe that's a slight exaggeration.”
At the time, however, there were many Bills fans who would have agreed.