This season, 2020, will be the fourth season of the Rams new 3-4 defense, the first three under Wade Phillips and now under Brandon Staley.

So, we are considering the Rams 3-4 era as being 1983-90 and 2017-19 and here are our picks for the Rams All-time team for that scheme along with the nickel/dime that both Shurmur and Phillips used as much as the base defense. We also are including explanations of why we made the picks. 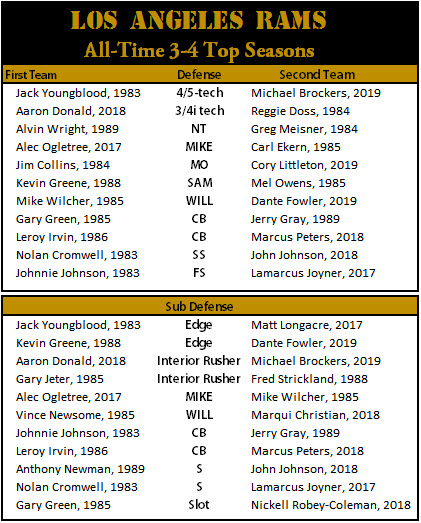 In the Shurmur 3-4 the defensive line two-gapped most of the time whereas in the Phillips brand of the 3-4 they did not, it was a one-gap 3-4. Also, in the Phillips scheme the front seven flops sides (strong and weak), and in the Shurmur scheme they stayed put, playing left-right.
In the base, Jack Youngblood is the base end. In 1983 he was a single-digit end by one pro scouting firm and in 1984 he was Second-team All-NFC. In 1983 and 1984 he averaged 47 tackles and 10 sacks per season. Brockers is a run-stopping phenom who plays inside on passing downs. Though not a top rusher, he has length and does a good job pairing with Aaron Donald, but for him to step up tio the next level like a Cameron Heyward or like Calais Campbell was when he played in a 3-4 he needs to get more pressure on the quarterback.
Donald is the obvious choice as the three-technique. His 2018 season was amazing with 20.5 sacks but in the 30 he's averaged 15 sacks, 9 stuffs, 49 tackles, and four forced fumbles since 2017.

Reggie Doss was a solid player who shaded inside the left tackle (4i) in the Shurmur scheme. In 1984 he had 66 tackles, 8 tackles for loss and 8.5 sacks, and 5 passes defenses. His 1983 season was almost identical, though he had 5 sacks and 7 passes deflected. Doss was good in the 3-4 base, but lacked the speed to be great in pass-rush situations and eventually would be replaced in those spots.
On the nose, Alvin Wright gets the call with his 1989 season, though he was very consistent from 1988-90. Those three seasons he averaged 61 tackles (5 for losses), 2 sacks, 4 passes deflected, and a forced fumble. Wright was a bull versus the run. He couldn't be moved. However, on the other hand in the pass rush he couldn't move. So he was clearly a one-dimensional player.

The backup nose tackle is Greg Meisner's 1984 season. Though he split time with Charles DeJurnett he had 36 tackles, seven for loss, and 3.5 sacks. Meisner was an active street fighter-type. He got by on smarts and hustle but he also could run a little bit. He was a solid player especially in late-1983 in the Dallas playoff game and in 1984 and a good rotational player for other years but we went with 1984 as his best.

The strong-side inside linebackers (MIKEs) are Alec Ogletree (2017) and Carl Ekern (1985). Ogletree has 95 tackles, 10 passes defensed a pick-six, 2 sacks and a forced fumble. Ekern had 118 tackles and 2 picks, 2 forced fumbles and one of the picks went for a touchdown. We chose 1985 over 1986 when eh was Second-team All-NFC because he was on the field more in '85 and made more plays.

The "MO" backer or weakside inside linebacker is Jim Collins and his 1984 season, though his 1985 season was equally good. He was All-Pro according to Pro Football Weekly in '84 and by Sporting News in '85. A neck injury in the 1985 Pro Bowl derailed his ascending career.

Backing him up is Cory Littleton's 2019 season. In 2018 Littleton was the "MIKE" and had a fine year, in 2019 he was moved to the "Mo" and played just as well, earning him a big paycheck with the Las Vegas Raiders. He excelled in zone coverage, could blitz, and recovered four fumbles. Being on the weakside freed him some from taking on too many guards and allowed him to run to the ball. Were it nor for Collins' great seasons (as good as any ILBers you can find) Littleton would be First-team.
At SAM or left outside linebacker is Kevin Greene and one could pick any season from 1988-90. For those three seasons, he averaged 59 tackles and 15½ sacks. He was a star for the Rams until they switched schemes and had to leave the Rams to go to the Steelers and back to a 3-4 defense. In 1991 and 1992 Greene battled and even had a good 1992 season playing more coverage than ever before, but his forte was going at the quarterback, not dropping into a zone or covering a running back.

His backup is Mel Owens who was a far better coverage backer than Greene but not near the pass rusher. From 1983-87 Owens butted heads with the good tight ends and fared well, and could get some rush. In 1985 he had nine sacks and from 1983-86 he averaged five sacks a season.
The right linebacker, or what Wade Phillips called the Will is Mike Wilcher, who was far more than a rusher. In 1985 he did have 12.5 sacks, a career-high, and many came from the outside, but some came as the nickel/dime linebacker as well. From 1985-90 he was often the lone "linebacker" in their sub defenses, which gets complicated because some of the defensive line positions were also filled by linebackers. But in the 4-1-6 he was the "1" and could cover or rush as the fifth pressure man from a stand-up position.

Dante Fowler's 11.5 sacks and 58 tackles get him the backup spot behind Wilcher. He was more of a defensive end, rather than a complete linebacker. However, his "career-year" got him big money form the Atlanta Falcons for the 2020 season and beyond.


Right now Jalen Ramsey isn't eligible for this squad having only played about a half-season for the Rams but he has a shot to jump in after the season. Right now, though, Gary Green and Leroy Irvin are the top corners for the 3-4 era.
Green came to the Rams in a 1984 trade and started slow but was excellent in the Shurmur zone scheme, even though he could play man coverage as well. Irvin was a self-made player. He began as a nickel back in the early eighties (1980-82) which meant he was a safety with either Nolan Cromwell or Johnnie Johnson playing in the slot but by the mid-1980s he was an All-Pro cornerback. From 1984-87 Irvin scored six defensive touchdowns to go with his four punt return touchdowns he scored from 1981-82.

The backup corners on our mythical squad are Jerry Gray's 1989 (though any year from 1986-89 would be fine) and Marcus Peters' 2018. Peters scored two pick-6s for the Rams in 22 games for the franchise and Gray was a First-team All-Pro in 1989 and a Second-team pick from 1986-88 and a Pro bowler all four years and ALl-NFC all four years as well. Gray would play safety in sub defenses in the late-1980s, he narrowly loses out to the First-team corners.
Both Cromwell and Johnson were great in 1983. Both were hurt in 1984 and both rebounded well in 1985. In their prime, call it 1980-85, few, if any safety tandem had more range than this pair. They both played slot corner at times, Cromwell first, then Johnson. Cromwell would also play some nickel linebacker in certain schemes. They were smart and versatile and both were good tacklers with good ball skills.
Backing them up are John Johnson's 2018 season and Lamarcus Joyner's 2017 season (2018 would fit as well. Johnson had 119 tackles and four picks and played nickel linebacker quite a lot. Joyner could also play slot but was poor man's Honeybadger in 2017-18 for the Rams.


That's the base defense.

Now, for the nickel.

Youngblood and Greene are the edges and Aaron Donald and Jeter are the inside rushers. Jeter was listed as an end but did his best work in the nickel/dime Eagle as a defensive tackle. Youngblood, in addition to his 10.5 sacks in 1983 had 45 QB hits and knockdowns of quarterbacks and 46 hurries (and almost as many in 1984 despite missing time due to a back injury) and Donald had 70, 91, 92 or 106 total pressure depending on the source you trust.

There is a dropoff to the second unit. Longacre was fine, but no star. Fowler was solid with 11.5 sacks in 2019.
Fred Strickland, you may raise an eyebrow at but he was a defensive tackle in the Rams nickel a lot in 1988. He had multiple roles. He was the 'nosebacker' in the Eagle defense, playing over the center, but in that scheme he would "stem" or shift to linebacker to make that Eagle into the "Hawk".  That Eagle/Hawk was one version of the so-called 5-linebacker defense.
Then nickel also would use five linebackers at times as well in 1989, after Gary Jeter left the Rams in Plan B free agency. Fritz Shurmur would often employ Mike Wilcher at linebacker and use four linebackers as defensive linemen. In 1988, though, Jeter was there and he'd play defensive tackle in the Eagle/Hawk and in nickel/dime and in the latter Strickland would be in inside rush mate.

We've touched on Wilcher's MIKE role and in this case, we put him ahead of Ogletree because he was the better rusher when called upon.

In 1985 Paul Zimmerman of Sports Illustrated named Vince Newsome his All-Pro nickelback and how he usually played was as a linebacker with Wilcher on the second level and Jerry Gray (late in the season, anyway) would play outside corner and Gary Green would play slot corner. Newsome would be a star today with his versatility, he is the forerunner in many was to the multi-position or "no-position" defenders you see today.
Newsome's 2018-19 counterpart is Marqui Christian who plays linebacker in sub defenses but also will play safety with Johnson as the linebacker or even Taylor Rapp in that nickel linebacker role.

Like the mid-1980s defense, the late-2010s defense has had a lot of versatile defensive backs who can play safety, linebacker, slot, and outside and had coordinators (Shurmur and Phillips) that employed them in may ways. We've only touched on where you might see some of these defensive backs line up but tried to give a flavor of the variety of ways players like Cromwell, Johnson, Joyner, Christian et al were used.
Nickell Robey-Coleman was the Rams slot for the last few years, whereas in the mid-1980s that role was filled by Gary Green (who even had a few sacks off of the slot) and before that Cromwell or Johnson and later my Mickey Sutton and others. Anthony Newman is who we put with the first unit as the 'dime' back.

Newman was a fine athlete with top speed who would play the second slot position in dime, but also could play safety, allowing our 'team' to put Johnson at a corner but that could be reversed as well putting Newman at corner with Johnson at safety. The same is true for Cromwell. All three were over 6 feet, could run, cover and tackle.

Agree or disagree? Let us know in the comments below.
Posted by John Turney at 8:12 PM