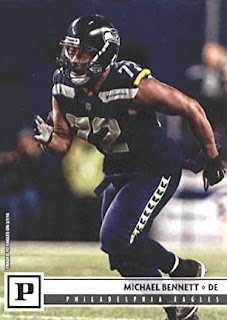 Earlier today Michael Bennett announced his retirement from the NFL via Instagram. Press reports have stated that he made his decision prior to the COVID-19 pandemic and its possible impacts on the 2020 NFL season. But the disease did have an impact on his decision. According to the New Yorker's  Louisa Thomas, "But it wasn’t until Bennett was sheltering in place with his family that the decision hardened into certainty, and it wasn’t until a few days ago that he decided that he was ready to announce it. The pandemic, by requiring him to focus on the essential aspects of life, was clarifying . . . he wanted to be at home with his family. "

Bennett waxed poetic in his retirement announcement posting, "Retiring feels a little like death of self, but I’m looking forward to the rebirth—the opportunity to reimagine my purpose.

In his eleven-year career, Bennett played for five teams, including four in his final three seasons. He was signed as an undrafted free agent by the Seattle Seahawks but waived during the season and signed by Tampa Bay. In 2013 he returned to Seattle as a free agent and played five seasons there.

In 2018 he was traded to Philadelphia and in 2019 he was traded to the Patriots who, in turn, traded him to Dallas where, as it turns out, he finished his career.
He was always listed as a defensive end, but he did a lot of his pass rush damage as a defensive tackle in nickel/dime situations, sinking to three-technique in those schemes.

He ended his career with more run stuffs (tackles for loss) than sacks, rare for such a good pass rusher. Even though his sack totals are not monstrous (he averaged 7½ from 2011-19) and he always got good pressure.
According to Football Outsiders he averaged 14 quarterback hits and 29 hurries per season in that same span, which are excellent numbers. Other sources have varying numbers for hits/hurries, but FO is usually, in our view, the most consistent in scoring such things.

In addition to his relentless pressure, he was a player who could hold his own in the run defensive in base defenses and not only hold his own, he'd make impact plays, tackles for no gain or losses that would but offenses "behind the sticks" in 2nd and 11 or 12 when they wanted to be second and six.

He could hold the point of attack and set the edge or he could slip or "backdoor" the blocked and knife in for a tackle for loss. Those plays made him stand out early in his career to us.

In 2014 Bennett was a Pro Bowl alternate and Grantland.com named him All-Pro and PFJ named him Second-team All-NFC and did so again in 2015 when Sports Illustrated's Peter King named Bennett First-team All-Pro (Bennett also made his first Pro Bowl in 2015 and was a PFWA All-NFC pick as well).

In 2016 Cardinals quarterback Carson Palmer called Bennett, the second-best defensive lineman in the NFL behind Los Angeles' Aaron Donald. "He's J.J. Watt-like," Palmer said to ESPN. "He moves around all over the place. He's inside, he's outside. He's dominant in the run. He's dominant in the pass."

Bennett plans to say involved in social justice issues (as he has been already) and to spend time with his family. He was always a "good watch" in games and often had great post-game quotes.

Said Bennett Bennett, after getting penalized for celebrating a sack against the Los Angeles Rams, "I’m never clear on the NFL rules…Two pumps get you a baby. Three pumps get you a fine.”