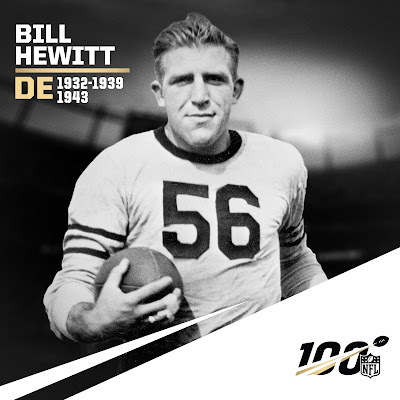 Today is the third and final post by PFJ on the career of former Hall of Fame end, Bill Hewitt.

After retiring from the NFL following the 1943 season with the Steagles, Hewitt stayed in the public eye. 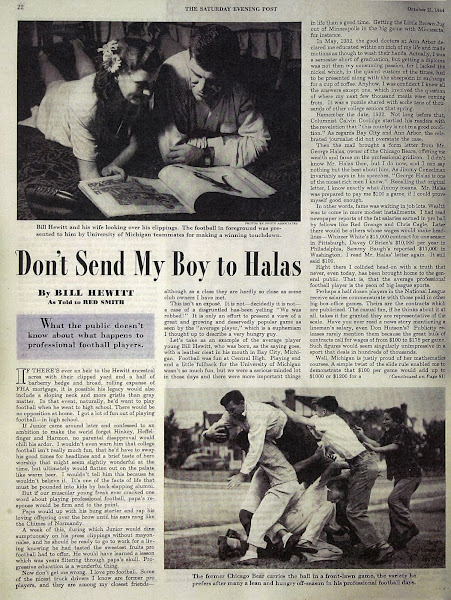 In 1944 the Saturday Evening Post ran an article on Hewitt, titled "Don't Send My Boy to Halas." In the October 21st issue of the magazine, Hewitt talked about playing pro football under George Halas. Hewitt mainly discusses the salary he earned. He also compares his salary with the Steagles in 1943 and dealing with Bert Bell. Three years after the article tragedy struck the All-Pro end.

On January 14, 1947, on the Bethlehem Pike in Pennsylvania, Hewitt was driving alone in his car on  slippery road. Losing control of his vehicle, Hewitt swerved off the road crashing into culvert. After being transported to the local hospital Hewitt was pronounced dead. He was just 37 years old.

"It is a great shock to learn of Bill Hewitt's untimely death," said George Halas to the press after learning of the accident. "He was one of the great ends of all time. Bill was unable to attend our alumni dinner last year, but he wrote me that he was looking forward to being with us in 1947. I am sure all of his old-time associates will mourn his death."

In 1971 Hewitt was honored by being elected to the Pro Football Hall of Fame, next to a Who's Who of NFL legends. Also elected that year were Jim Brown, Frank "Bruiser" Kinard, Vince Lombardi, Andy Robustelli, Y.A. Title, and Norm Van Brocklin. Accepting for him was his daughter, Mary Ellen (Hewitt) Cocozza, who never knew her father, let alone seen him play. At the podium on the steps of the Hall of Fame she said:

"Thank you very much. It's a great privilege and honor to be here in Canton accepting this award on my father's behalf. He is being recognized with such great men that have made football the American tradition it is today. My only regret is that my father cannot be here to reap the harvest of his efforts, but I know he is here in spirit. Thank you so much." 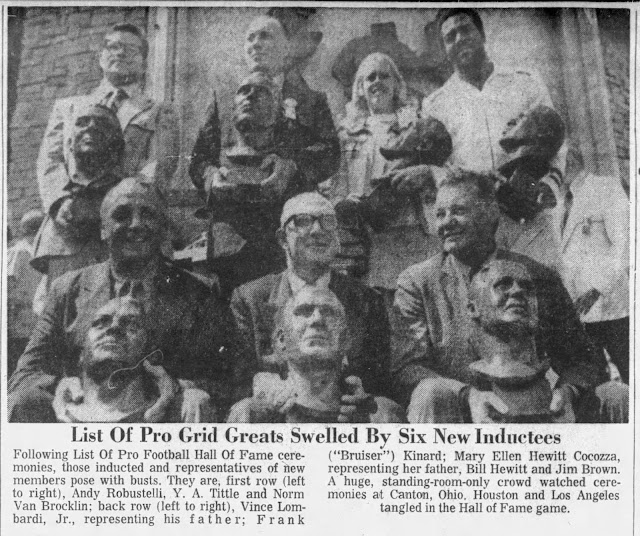 For the next four and half decades, the name of Bill Hewitt seemed to be lost. Until 2019 when the NFL celebrated its 100th season. During the campaign, the NFL selected an All-Time Team. A 26-member blue-ribbon panel went about choosing the team. The panel selected 7 defensive ends for the team. Because of his standout play on the defensive side of the ball, Bill Hewitt was selected as one of the seven defensive ends. Over 75 years since he last played a snap in the NFL, Hewitt was given one of the greatest honors of any former NFL player- a spot on the league's 100th All-Time Team.

For the past three days PFJ has celebrated the life of Bill Hewitt. On the anniversary day (Jan. 14th) of his untimely passing, we look back and never forget the brilliance of one of the NFL's greatest players.