Going to begin with some responses and statements before digging into the upcoming title games.

Yes, Kaimac 77 there are defensive stats for the late 1940s and the decade of the 1950s. How do I know this? My library has them due to due diligence called research. Every interception, and now with recent research every opponent fumble recovery.

Pass rush statistics are not as complete, though there are two men; John Turney & Nick Webster who started me on that path, and have film, and play by plays to add additional info. Have read more than one article concerning when the first Super Bowl should have been with the Chargers taking on the Bears, but 1964 should have been the year with Gilchrist vs. Brown. So, Brian Wolf imagines those two standing toe to toe eyeing each other, and not saying a word before kick-off.

For those of you who steadfastly read this column, you have been inundated with statistics. Efficiency ratings for passers and defense, but more importantly—when a team does this or that what percentage do they win? When a team returns an interception for a touchdown in a regular-season game that teams wins just about 80% of the time. One team has a 100-yard rusher, and their opponent does not, the team with the 100-yard rusher wins 77% of the time in the regular season.

Well, the regular season is over, and the following is not a complete play-off history(though that has been done)—we have had 50 years of championship games since the wildcard was brought into play with the merger in 1970. How do those stats compare to the regular season?

Now that is a key element we all can wrap our heads around. There have been 15 interceptions returned for a touchdown, with 14 in victory (93.3%)—a 13% increase, and boy oh boy imagine if the team you are cheering for has a player returning the ball through the maze of offense players and headed to the end zone. Game-changing!

Though how the game is played has undergone an evolution over the past 50 years with the passing game, will go to my grave still believing you can win when you run the ball.....no, no.....not run the ball-----RUN THE BALL.

There have been 33 one hundred yard rushers in title game history, and the breakdown is as follows. Twice both teams have had a 100-yard rusher, so we throw those out based upon my criteria. Of the remaining twenty-nine; 27 have been by the winning team or 93.1%—16% higher than the regular season. Wow! Now that has meaning.

Years ago combined both together—when a team has a 100-yard rusher and returns an interception for a touchdown they win about 91% of the time. Only three times this has happened in a championship game, and will surmise readers you would like to know who?

The first was when the Cowboys are in the Coliseum in January of '79 with Dorsett gaining 101, and Hollywood Henderson returning an interception for 68 in the demolition of the Rams.

The stands at RFK rocked as the Washington fans chanted "we want Dallas" and the next week Darryl Grant returned an interception 10 yards to score, while Riggo pounded away relentlessly behind the hogs for 140.

The last time came on January 20th, 1991, a day of celebration for Buffalo fans when outside linebacker Darryl Talley scored on his 27 yard return, and Thurman Thomas gained 138 in the destruction of the Raiders. The odds are long that this last stat will happen—with only three of one hundred, but you never know?

Every announcer this week will state that teams need to get off to a fast start, yet you never have a number to go with it? Scoring the first touchdown (the hell with field goals) is monumental. Only one title game without a touchdown (Rams over Bucs)—so for the other 99?

There have been so many outstanding games on January 16th or 17th, had a difficult time which game to choose? For all of you, would relish which games historically on either of those dates you would have chosen, but for me, the game that stands out is January 17th, 1988. 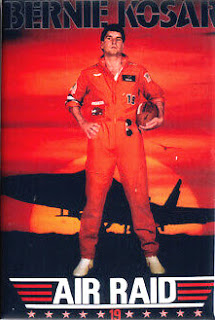 My favorite quarterback of all-time is Bernie Kosar and always enjoyed watching John Elway do his magic; thus the rematch of "the drive". Dick Enberg was a joy to listen to as an announcer, and his partner at that time Merlin Olsen while very astute and knowledgeable would sometimes lack emotion in his analysis. Not so on this Sunday.

Not just Denver jumping out to a 21-3 lead, and not just because Bernie brought his boys back into the game with a 28-10 rally to tie the game at 31. The ebb and flow for me was compelling and had me so focused, not sure how many Dr. Peppers I had that afternoon as the action came across the screen. Have watched that game more than once. Championship Sunday is coming in five days—cannot wait!