Hall of Fame Final 15—Thoughts and Predictions and Hopes 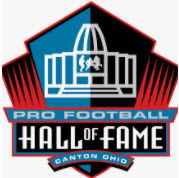 Here is our annual take on the Hall of Fame Final 15 and some thoughts and evaluation of who may or may not get in. Clearly, we will have some misses, but we have done fairly well over the years in our writings and on radio interviews. we will see if he can keep up reasonable accuracy in our guesses.
Remember there are only five slots. Five. Tough choices have to be made by voters. Really, all fifteen are worthy. Just some stronger resumes than others.
Locks
Peyton Manning, Quarterback 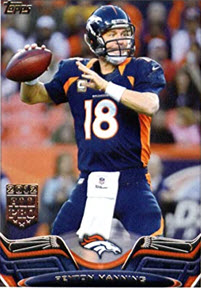 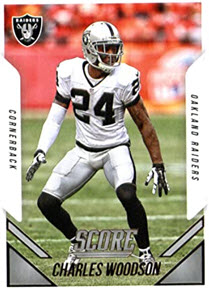 Will be a discussion but a man corner. Excellent slot corner and good safety with honors, stats (picks, sacks, and forced fumbles, ring, intangibles (played in playoff games and Super bowl with broken leg), and testimonials from opponents. Checks all the boxes. 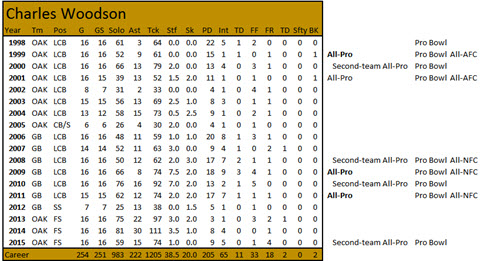 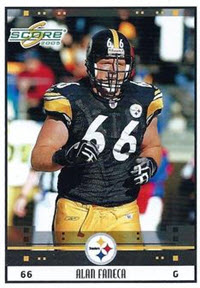 He has the honors and there is no denying him so why not make it this year? Some people we talk to him think he (like some other Steelers offensive linemen) is overrated and got some "free repeater" All-Pro and Pro Bowl honors due to lack of diligence by voters and fan voters but be that as it may, it is his time.
Things we regret, not saving STATS, LLC. sacks allowed info for all players when it was posted by the Washington Post and Dallas Morning News and others. It has disappeared, with the "gold rush" of stats it has become too expensive for papers to keep it all published.
And the statistics companies, STATS, Elias Sports Bureau, ESPN Sports & Information, Sportsradar, Sports Information Solutions, NextGen, Pro Football Focus, Football Outsiders, and even Pro Football Journal's run/pass stuffs et al, it is a mess and you cannot always get what was once out there on the web and what is out there now often conflicts with each other—more on that in an upcoming post. So, while Faneca's stats on sacks allowed exists, we don't have it.
Hard to say but the final two will come from this group
Calvin Johnson, Wide Receiver 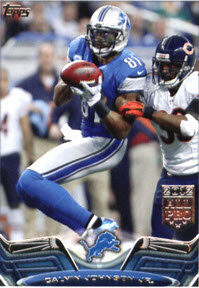 Cannot deny the skill set, possibly the best ever. Numbers and honors there. Could get in right away or have to wait. The only thing that hurts him is a short career and some voters like to limit who gets in on the first ballot. Guessing 75% chance.
Clay Matthews, Outside Linebacker 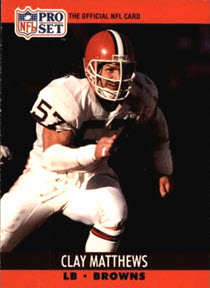 Elvin Bethea got in on his last shot. As did Carl Eller (though there was a rules change that allowed it). Others have not like Everson Walls. He does not have the sack numbers his contemporaries did because he had so much more coverage duties on third down which guys like Lawrence Taylor, Rickey Jackson, Andre Tippett and Kevin Greene did not have. That also hurt his honors (just one All-Pro).
But he was named by Proscout, Inc.m as one of the top players they think should be in the Hall of Fame. Proscout is one of the sources Paul Zimmerman would crib from in the 80s and 90s.
Matthews has a chance. Maybe 50-50. 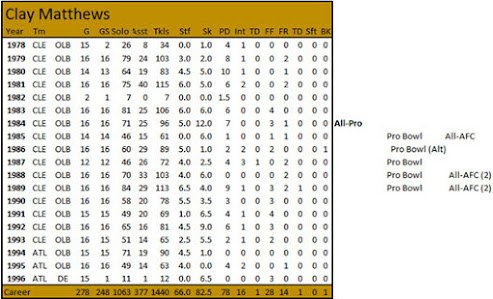 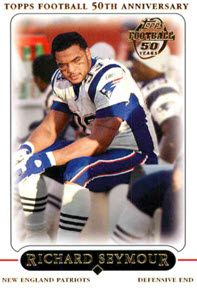 Played a tight-5 technique in base defense, a 3-technique in nickel. A hard-nosed player, a two-way player (run and pass) but does not have big sack numbers which likely hurts him among younger HOF voters. But he should get one of the five slots. But changes are likely less than 50-50 which is a shame.
He's of the ilk of a Howie Long, Dan Hampton, even a Lee Roy Selmon, but was bigger than all of them but for some reason didn't get the publicity they did. Also has the "jewelry".
We speculate, perhaps a 25% chance (the next few—Butler, Thomas, and Boselli we put in the 25% category as well) but as we already mentioned, deserves a slot (as does Bryant Young who didn't even get to the Final 15 this year). It will be a bit heartbreaking when he falls shot and we think he will. But, a good shot at the Final 10 again. 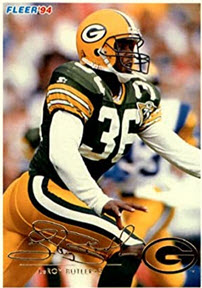 Lots to like. But Woodson being up this year likely hurts him because we've observed (sometimes) two guys from the same team can hurt the lesser credential one. Not always and not that it is fair, but we think it happens based on discussions over the years. It's not a scientific fact, just an impression.
He played slot corner and played safety the way it is played today, all over the place. In the box, deep middle, 1/2 the field. He picked off passes, sacked the quarterback, played linebacker in sub-packages.
We think he is worthy and more valuable than a few of the safeties that have been on the list recently. 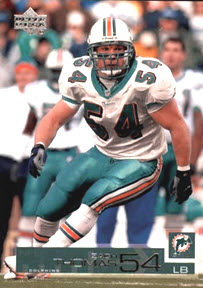 A fine player with some good things on his chart. Lots of tackles for loss for instance. We don't like the fact that while he was getting his five All-Pro honors from the Associated Press there were two middle linebacker slots (roughly from 1984-2016 or so) he was always the second-leading vote-getter. He never made the PFWA All-Pro team which just had one MLB slot. He was the leading beneficiary of the format of the AP team.
Imagine if there were two center slots or four defensive tackle slots (double the normal amount) there would be a lot more players from those positions with All-pro honors and therefore getting more HOF attention.
While that does not totally discount those honors it does mean they need to be judiciously considered.
Overall we can see Thomas getting in, he's been in the Final 10 and may get there again this year. So odds are good in the near term, but not this year. 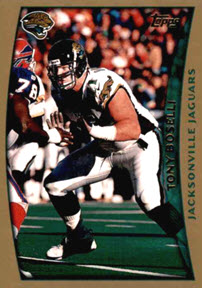 The question is this:  Does Boselli deserve the proverbial "Gale Sayers exception" for the Hall of Fame? that is the axiom that an injured player that is great still deserves the HOF if his career is cut short by injuries. Sayers clearly was the precedent setter for the modern era.
Finally, in the 1990s, Dwight Stephenson got in after a few years of debate even though many experts felt he was the best center of all time based on film study and the evaluations of his peers. Eventually, Ken Easley and Terrell Davis got in under roughly the same standard.
Boselli's skill set and even honors are there. It is the longevity and nothing else. And the fact that voters keep putting skill players at the top of the queue and pass over worthy linemen like Mike Kenn or Joe Jacoby and others.
Also, it's only fair to mention, since some pro-Boselli people (perhaps not on the committee) sank Joe Jacoby's final candidacy by suggesting he was moved to right tackle when Jim Lachey came to Washington because he was not best suited for a left tackle. Actually, Lachey didn't convert well to right tackle so, for the team, Jacoby moved that Boselli himself was not a blind-side tackle. Since that was the impetus for dogging Jacoby.
Mark Brunell was left-handed so Boselli was a front-side tackle. Leon Searcy was protecting Brunell's blindside. Facts are facts. While some of the better, quicker rushers would still be on the defenses' right side, they would face Brunell. So in the classic sense, Boselli was not the "left tackle" is the sense that term is used. It's a kind of a misnomer in his case—a left tackle who protected the face-side of the quarterback.
He will get in, his time will come. We don't think this year, 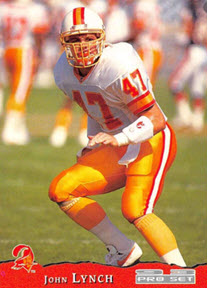 Lynch has a ring and a lot of Pro Bowls, though we think maybe a couple of the Bronco Pro Bowls are slightly dubious (fan voting). His "hook" is he is the last of the hard-hitting safeties. The game has changed and we won't ever see another like him. There are better safeties not in the Hall of Fame. He didn't have a lot of "numbers"—sacks, picks, etc. A tough call.
His candidacy has been fading but he has as much of a chance as the previous players—Seymour, Butler, Boselli, Thomas, and Matthews. To us, that fifth spot is a roll of the dice and with the game in Tamps, Lynch having a high-profile job and having been a TV analyst for so long maybe this year Lynch wins that roll. 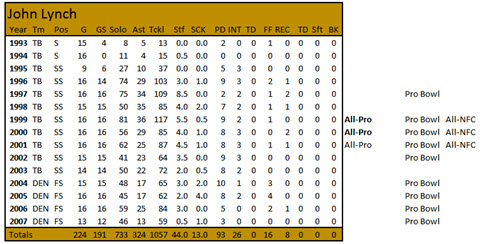 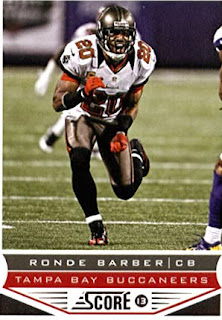 And interesting newbie to the Final 15. Azone corner. Often zone corners not as respected as the top man corners like Woodson or Mike Haynes or a Darrelle Revis and players like that. But isn;t that a coach's decision? HOF voters are not player personnel evaluators, they evaluate careers.
Barber's career is unique in NFL history so far. For one he had 28 sacks, as a corner. He also had 63.0 run/pass stuffs (tackles behind the line of scrimmage on run or pass plays—and exclusive PFJ stat). For comparison, Warren Sapp had 65.5 such plays. That 91 plays behind the line of scrimmage for Barber. Being able to play slot corner as well as he did and also to force run plays and pressure the quarterback makes Barber unique.
Then throw in the picks and the 208 passes defensed. And the defensive scores on picks and fumble recoveries (12). He also scored a safety and two touchdowns on special teams and blocked three kicks on special teams. Seems like Ronde was a football player, not just a specialist zone corner.
The voters are going to have to sort that out, though. We think he's a compelling candidate. But won't have a shot this year his first in the Final 15. 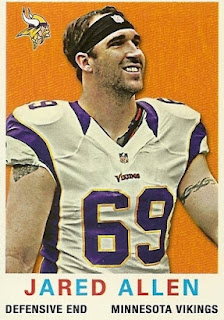 Has plenty of compelling things on his resume but not for the first ballot. There are defensive ends from the 70s and 80s that had 20-sack seasons under their belt and over 130 career sacks or so (Coy Bacon, Al Baker) and even Harvey Marin (114 sacks and a 20-sack season) who never got a sniff of Canton.  Allen does not deserve more consideration than they did.
Maybe Allen gets in, we like him a lot, especially in his days as a Chief, but he's not one of the top five players this year. But another key point is he needs to be compared to recent edge rushers who are in (Jason Taylor) and those coming up (Julius Peppers, DeMarcus Ware, Terrell Suggs, Dwight Freeney) to see if he has the goods compared to them. 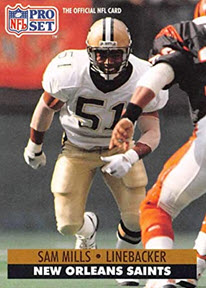 We like him, but no room. Not a three-down linebacker for most of his career. He was with the Panthers but with Saints, not usually. Lots to like. But not even the best linebacker on this list of fifteen. 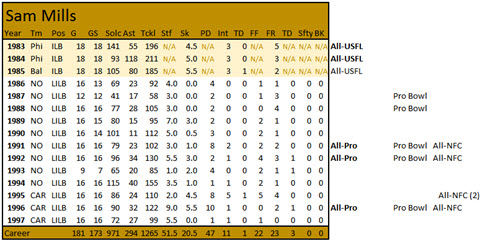 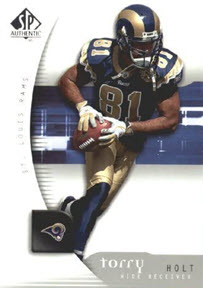 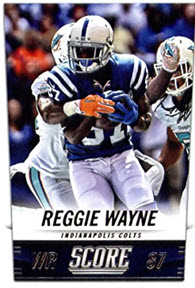 Stop with the second-chair wide receivers. However, Wayne has an unfair advantage with Bill Polian and Tony Dungy as voters. A guy who drafted him and a guy who coached him. This is one reason why coaches and players and contributors should only be advisors on the HOF committee and not voters. It creates not just an appearance of a conflict of interest but a clear and obvious conflict of interest.
Let them advise only. Sorry, it is unfair to those who don't have a coach or teammate, or general manager on the committee to push them along.
Posted by John Turney at 6:09 PM