SATURDAY SAGA: Interceptions for a Touchdown in Ram History 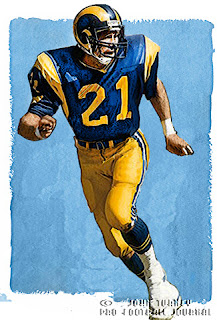 Since there are no games this weekend, there will not be a "Tuesday Tidbits" next week, rather today to celebrate Nolan Cromwell's 66th birthday some detailed statistical info on Ram history. First up though, a thank you to Mr. John Steele for responding to last week's article.

Have been asked more than once who would be my receivers in a four-wide alignment with a single back in the backfield? Jerry Rice, Lance Alworth, Paul Warfield, and the fourth is always a toss-up for me...the finalists are Raymond Berry, Steve Largent, and Marvin Harrison. Mr. Steele mentioned Warfield, and when evaluating receivers and you watch film of Alworth or Warfield you see the complete package. Name a trait that you want in a receiver and these two men had it.

The Cleveland Rams had a record of 6-21 before putting a winning streak together in late 1939 under coach Dutch Clark, and on December 3rd in a victory over the Eagles linebacker Jerry Dowd returned a Philadelphia pass 24 yards for a touchdown.

No doubt Jerry Dowd in his only year in the NFL did not realize how many more times a Ram would return an interception for a score.

How many you ask? Why 139 and counting—by far the most of any team in history, and many teams have not even recorded 100 pick-sixes—let alone 139.

The Rams have had so many outstanding defensive backs in team history, yet surprisingly very few have been finalists for the Hall of Fame. Cromwell will likely never get in though he was the best of the early 1980s of all the safeties in the NFL (Bud Carson, at the time, called him the NFL's best-ever free safety).

The only other Ram that should get real strong consideration is Eddie Meador as a senior candidate. Eddie and LeRoy Irvin hold the team record for most interceptions returned for a touchdown in team history with five. Cromwell is one of a handful with four.

Years ago worked with Ryan Anderson in "correcting" errors in the Ram guide, and he was a joy to work with. Since Anderson now works for Carolina the Ram front office has no one to correct the errors that still exist. You want an example? Page 264 of the 2008 Media Guide lists the most opponent fumble recoveries in team history, and at the top is Johnnie Johnson with 19 but that errantly includes a few offensive recovers and are not "opponent fumbles recoveries" thus that is stat is incorrect as the team record is held by Eddie Meador.

Closing this saga with thoughts on the final game of the season as the Buccaneers and Chiefs battle for the Silver Trophy.

Last weekend both of these teams displayed an impressive pass rush; which raises the question of which of these two teams can continue to sack the quarterback. Though Tampa Bay and Tommy B. were able to survive turnovers last weekend if he turns the ball over to the Chiefs next Sunday night they will lose. Statements about the Buccaneers playing at home just might be meaningless since the won/lost record this year for home teams was not near as strong as years past.

We all have can list aspects to the game we believe are vital for success and will end this with two. Travis Kelce caught 13 passes against Buffalo, and if the talented tight end comes anywhere near that number the Chiefs win.

Second, will the Chief's secondary play as well as they did against the Bills? 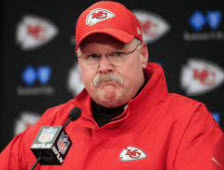 Andy Reid has an opportunity to put his name with some of the coaching legends of the game with back to back SB wins...will he join that elite group? Yes.