For the next 3 days PFJ will look back at the career of former Pro Football Hall of Fame two-way end Bill Hewitt. Last season Hewitt was named to the NFL 100 All-Time Team, a somewhat surprising choice. But looking further into Hewitt's career, you can see why he made the prestigious squad.

In 1933 the Chicago Tribune ran an 8-part series of articles, titled, "Bill Hewitt: The Story of a Football Star." Written by their lead sportswriter, Wilfrid Smith, the Tribune picked Hewitt over more popular Bears players Bronko Nagurski and Red Grange. The series ran from December 2-9, 1933 in between games by the Bears against the Portsmouth Spartans (Dec. 3rd) and the Green Bay Packers (Dec. 10th). Many Chicago readers got to know Bill Hewitt, just as the Bears were wrapping up the NFL's Western Division.

The series covered Hewitt's childhood, high school and college sports career, as well as his first few years with the Chicago Bears. Hewitt didn't play football until his senior year in high school at Central High School in Bay City, Michigan. Since he weighed just 100 pounds at 14 years old, Hewitt was reluctant to put his body at risk. When he turned 17 he was up to 150 pounds. "I liked football, but at that time basketball was my game. I didn't play football until the fall of 1926. And when I did make the Bay City high school team at left end in my senior year I was no whirlwind," said Hewitt to the Tribune.

Hewitt's high school coach was Garlan "Chief" Nevitt, who was a former grid star at Haskell Institute School. Hewitt slowly picked up the game. His most common trademark was his effort, never taking a play off. "Hewitt was one of the greatest boys I ever coached," said coach Nevitt. "Although Bill was handicapped in size and lacked experience. His aggressive, untiring play, and finally his sheer power and will to succeed made him one of the finest competitors I have seen. Bill loved to win and he was delivered when the going was toughest."

After graduating from high school Hewitt took a year off from school, working odd-jobs around town. Soon Hewitt got the itch to play again. He enrolled at the University of Michigan in the fall of 1928.

"By this time I was anxious to play football again and I also know that a college education wouldn't hurt my chances for success. The one year that had elapsed since graduation from high school had proved to me that unless I did something about it, I might wind up wrestling with the well known wolf on my door step for the remainder of my life," said Hewitt. "The reason I started for Ann Arbor with a lot of hope and few dollars was the encouragement my father gave me. He urged that I go and pointed out that if I had to come home, I wouldn't be any worse off than I was right then."

Playing left end on the freshmen team he continued to give the all-out effort that would make him a future NFL star.  Playing three years of varsity ball for coach Harry Kipke, the now 170-pound Hewitt made an immediate impact for the Wolverines. Over those three seasons the Wolverines went 21-4-3, winning back-to-back Big 10 championships in 1930-1931. Teaming with All-American quarterback Harry Newman, Hewitt earned many accolades at Michigan. He would attract NFL scouts, especially George Halas of the Chicago Bears.

In 1932 there was no NFL Draft, so Halas recruited Hewitt to play for the Bears. Halas's team was just coming off an 8-5 season under coach Ralph Jones, finishing in 3rd place behind the Portsmouth Spartans and league champs, Green Bay Packers. Adding Hewitt to the Bears, helped changed the course of Halas's squad. That season Hewitt helped the Bears to the top of the NFL standings, tying the Portsmouth Spartans for first place. Playing in the famous indoor game at Chicago Stadium, Hewitt and the Bears defeated the Spartans, 9-0, to win the NFL title. As a rookie Hewitt was a champion.

While talking to the Tribune, Hewitt gave his opinion of college and pro football.

"Professional football is cleaner than college football. This may be a shock to the amateurs, but a pro player, knowing that the other fellow is trying his best to earn a living, doesn't go out of his way to slug or pull some unethical trick. Sometimes, yes, but generally there's a reason. Otherwise most fouls are unintentional.

The college player is told what to do. He accepts the decision of the coach, because he doesn't know enough to question it. George Halas, in coaching our team, is always willing to listen to what we players have to say. If we tell him that such and such a play can best be accomplished in this fashion, well, we try it and see. That's impossible in college." 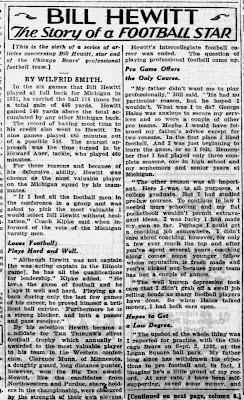 At the end of the 8th part of the series, Hewitt mentions a few of the greatest players in the NFL (1933).
"I consider Cal Hubbard of Green Bay one of the greatest linemen in the league. But recently Hubbard has been used as defensive full back. Link Lyman, the Bears' veteran, is a great tackle. Lyman has been of tremendous value to the Bears this season, and I never played alongside of a greater tackle. John Sisk is one of the hardest driving backs; Arnie Herber, one of the cleverest, and Cliff Battles of Boston is the hardest hitting of all the men I've played against. But don't forget that in professional football they are all good. They have to be."
The 8-part series is worth the read. Check it out.
Tomorrow: Bill Hewitt: "The Offsides Kid"
Posted by cdw83 at 5:58 AM