PFJ looks back at the career of Bill Hewitt. Last summer PFJ ranked the greatest two-way players of the Pre-WW II era by positions. For the Ends, Hewitt came in at number #3 behind Don Hutson and Guy Chamberlin.

Nicknamed the “Offside Kid” for his explosive first step on defense, the 5-9, 190-pound Hewitt might’ve been the best defensive end during the NFL’s Pre-WWII era. He never stopped moving, especially on defense, compared to Lawrence Taylor with a motor that didn’t stop. Hewitt developed a technique of playing off the ball a few yards and sprinting to line of scrimmage to time snap of ball…Had a powerful upper-body, barrel-chest, and muscular arms to dish out punishment. “Bill Hewitt, of the Chicago Bears, was as tough on defense as he was agile on offense,” once said Mel Hein, Giants Hall of Fame center, about Hewitt.

Hewitt played 9 seasons (101 games) with the Bears and Philadelphia Eagles- coming back in 1943 to play for the merged Steagles (was traded to Eagles for Sam Francis, a deal that Halas regretted). Was a member of 2 NFL Championship teams with the Bears, 1932-1933. He was also known to be an excellent player on special teams, running down on kickoffs and punts, and had a great ability to block punts. A perfect example of his special teams’ play came in a game against the Packers in 1933 (Sept. 24). The Bears, trailing 7-0 in the 4th quarter, Hewitt blocked a field goal kick that led to him throwing a TD pass (to Luke Johnsos), then minutes later blocked a punt that he scooped up and returned for the game-winning score in a 14-7 win.

Hewitt led NFL in TD catches in 1934 (5) and was 2nd in 1936… finished career with 103 catches for 1,638 yards and 23 TD catches (26 total TDs)…In 1933, on end around plays threw 3 TD passes; Bears developed play where fullback would charge line, stop short and throw “pop pass” to end on slant in middle of field; sometimes the end, especially Hewitt, would then lateral to the other end who trailed the play. This play was used by Hewitt- who lateraled to Bill Karr- for the winning score in the First NFL Championship Game in 1933 to help the Bears defeat the Giants, 23-21.

Throughout his NFL career Hewitt achieved many honors.

Along with his brilliant playing career, Hewitt was a star in the city of Chicago. Numerous times he was asked to make an appearance. Whether it was teaching young boys how to play the game of football or endorsing a product Hewitt was always around the Windy City to make his presence felt. 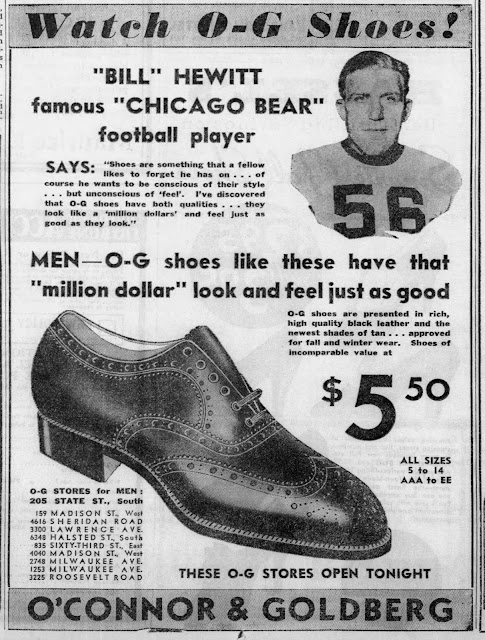