Fairness and Equity in the Hall of Fame—More is Needed 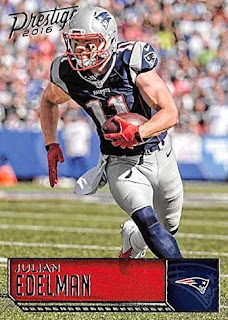 Julian Edelman retired this past week and immediately the discussion on social media/websites began the usual "Is he a Hall of Famer". In general, the proposition went over like a lead zeppelin.
Among the naysayers were lists of other wide receivers who were said to be more worthy (likely) and that they should be in (not so fast).
It brought up something that has been an issue since football began. we think—the so-called "skill players" getting more than their fair share of glory when it comes to honors. That also applies to the Hall of Fame and the job the committees have done over the years.
Now the Hall of Famer voters are the best and the brightest by and large, but they are human and therefore fallible. They make their judgments and the aggregate of those judgments is the polling and from that, we get Hall of Fame classes each year.
So, why is it longtime beat writers with the most experience, the most access to coaches who will always tell them about offensive line play or defensive schemes continually favor the glory boys? The HOF voters, many of them in the so-called "writer's wing" of the Hall of Fame as winners of the Dick Mccann award, of all people, should know better.
On a football field, there are six skill players—three backs and three ends. There are sixteen others (excluding special teamers for now). That is a ratio of 2.6 non-skill players for every skill player.
So, when you look at the numbers in the Hall of Fame why is the ratio (for modern players, we didn't look are pre-WWII players for this) about 1.6 to 1? We are one short, aren't we?
If you put it in raw numbers and not a ratio we are short about 100 non-skill players—linemen, linebackers, and defensive backs.  One hundred gritty and tough blockers, run-stoppers and sackers, tough-guy tacklers, graceful pass defenders.
Why?
Many, many. and we say it again MANY of them have resumes that include more "honors" than the skill players who sometimes get in with one All-Pro or maybe two. They have stats these days which can be reasonably analyzed. There is literature of the day available via searches on archived newspaper sites online. Lots of full games are available online (though likely not legally kosher). Scouting reports and coaches playbooks are found in the Hall of Fame library that are full of information and quotes and testimonials. The point being there is information available on the non-skill players.
So why, anytime the Hall of Fame comes up does this "highlight generation" jump on a wide receiver or running back or even quarterback bandwagon? Have we gone THAT far down the fantasy football rabbit hole so as to ignore the Lombardi, Chuck Noll, even passing-type coaches Don Coryell and Bill Walsh ethics were taught? 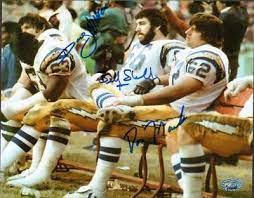 Don't kid yourself Air Coryell does not work without Russ Washington, Ed White, Doug Wilkerson, and Don Macek. And ask Jim Hart if Dan Dierdorf and Tom Banks and Conrad Dobler and Roger Finnie and Bob Young were part of the Cardinals offense. Coryell along with Jim Hanifan brought a new, aggressive short-set style of pass blocking to the NFL. Said Dierdorf, "Are they going to let us play this way?", suggesting that it might be against NFL rules.
Bill Walsh emphasized a zone blocking style for his West Coast Offense that included lots of backside cutting that was not like by defensive linemen and was taught by Bobb McKittrick and this spread throughout the NFL. So, even the pass-happy gurus relied on the blocking of great linemen.
So, back to the 1.6 to 1 ratio. Are we suggesting that the ratio should be exactly the same as the 2.6 to 1 that exists on the field? No, of course not. But would 1.8 or 1.9 be so bad?
Can there not be a sense that instead of focusing on getting the 40th of 41st or 42nd wide receiver in who may or may not be a second chair receiver on a team that has a receiver in the Hall of Fame that the fans and even voters focus on getting maybe the 19th or 20th cornerback in?
Albert Lewis is running out of time before he gets thrown into the senior "swamp" as it is called. Why should that happen while so-called second-chair receivers get in?
Lewis has longevity (16 years), was a shutdown corner, had honors, was good on run support (check his tackles for loss stats sometime—33.5 plus 12.5 sacks), and is the best punt blocker in NFL history—a true weapon on special teams, a guy who could win you a game with a punt block or recovery.
Then we look at Ronde Barber. (Now, to be clear, this is not an advocacy piece, we just picked a couple of cornerbacks with some great credentials to point out the unfair disparity between the receivers and the men who cover them).
Whether you think Barber is the proverbial shutdown corner or not, he was a unique cornerback in NFL history in a lot of ways. He was a zone corner (in the Tampa-2) a lot but also a slot corner when the Bucs were in nickel and he was super effective there. He could cover the slot receiver and could also be a force in the run game—63 run stuffs in his career, only one cornerback is close. Barber also had 28 sacks...91 plays behind the line of scrimmage for a corner. Pretty impressive.
Again, you may not think he's Deion Sanders in man coverage but his career, his uniqueness, separates him from other corners far more than some of the wide receivers being advocated do from their wide receiver peers. So, It's a matter of fairness. There is, really, only one Ronde Barber, and there are seemingly a dozen or more backs and receivers with few honors and big stats. So who is rarer?
We could go on. There is one pure 3-4 inside linebacker in the Hall of Fame with another (Ray Lewis) who played in both 30 and 40 defenses. All the rest are 4-3 MLBers. The 3-4 defense was the predominant defense of the late-1970 to the early 1990s and then again recently (as a hybrid).
There is just one nose tackle in the Hall of Fame (Curly Culp). The nose that played the most games at nose, made the most Pro Bowls, was All-Pro the most among nose tackles cannot get a sniff.
Those are just a few more examples of the lack of fairness to the grunts of the NFL and the place of privilege of the "skill" guys. Had this kind of thinking been in place maybe Joe Jacoby, Clay Matthews, and Everson Walls (for three recent examples) would not have been sent to the swamp.
Are Bryant Young, Willie Anderson going to the swamp? They cannot get much traction. That could change, of course, but these are "blue" players, as are others who just get overlooked too often and they seem to come from our "excluded group" of non-skill players.
So, this is just a heads up to fans on Twitter and elsewhere, when you bring up skill players for the Hall of Fame they sure better be great and the burden should be on you to show they are better than some of the tackles, linebackers, and safeties who have stellar resumes.
As for voters, this is just a convivial suggestion. Increase the fairness and equity for the blood and guts of the game. Get that ratio going forward to 1.7 or 1.8 to one, rather than falling to 1.5 to one.
Posted by John Turney at 8:11 AM