TUESDAY TIDBITS: "Luggin' the Leather, and Passing the Torch"

By TJ Troup
Recently read that Curley Culp has left us, and though had not initially planned to write about him today; just cannot pass up the opportunity to share thoughts on this Hall of Fame lineman.
Time for revisionist history, and the Broncos have the foresight to start Culp at defensive tackle as a rookie. Culp is not traded to the Chiefs, and coach Joel Collier moves Culp to nose tackle and though Rubin Carter was a fine player, he pales in comparison to Culp.
The Denver 3-4 with Culp, Gradishar, Jackson, Alzado, Thompson, Wright, and the rest would have been even better! Autumn of 1967 (my junior year in high school), and was coached by Roger Stahlhut. We built a coach/player relationship that am still proud of, and we later coached together.
Asked him about his time as a starting guard at Oregon, and who was the toughest, best opponent he ever faced (attempted to block), and Roger did not hesitate as he described his battle with Curley Culp. Roger stated emphatically that Culp was by far the strongest man he ever attempted to block. RIP Curley Culp...you are a true Hall of Famer.
The results of this past weekend's games has created a long jam for the final wild card berth in both conferences, and as such so many games really have meaning down the stretch. Time to go back and revisit November 28th games historically. 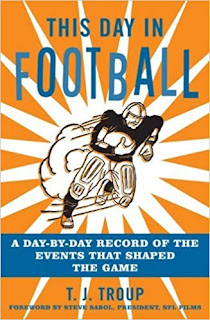 My book This Day in Football lists Ernie Nevers, and Fred "Dippy" Evans for significant performances, but am going to take us to Pittsburgh for the traditional match-up of the Steelers vs. Browns. Cleveland is in first place in attempting to defend their title, and leading the way is of course the greatest running back of all-time. 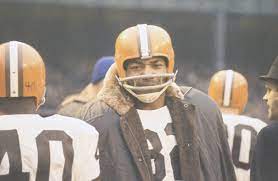 Six times already in '65 Jim Brown has gained over 100 yards rushing, and today he will add to his league leading total by gaining 146 yards on 20 carries. The big man follows the blocks of his excellent offensive line and motors down the left sideline for his season long run of 67 yards.
Brown in his ninth campaign still retains the physical gifts the Lord bestowed on him. The strength, power, speed, and balance needed to break tackles has taken him to the promised land many times already in '65 as he looks to break the record for touchdowns in a season. Brown actually does break Lenny Moore's record of 20 touchdowns, but someone else can also find the promised land called "paydirt"!
Today will be the first time that veteran Jim Brown and rookie Gale Sayers both gain over 100 yards rushing on the same day. Much has been written about the Kansas Comet, and having watched the 1965 Bears highlight film over and over the past few days—the real story of Sayers as a ballcarrier needs to be told. Being in the Coliseum in September saw Sayers score the only time he ran from scrimmage.
Gale sweeps left and pulls up to throw the left handed option pass, but instead takes off to the right, weaving, and sprinting into the end zone on an 18 yard run. Why Halas benched Sayers remains a mystery, and in the coming weeks Gale when granted an opportunity scores touchdowns receiving, rushing, and returning a kick-off. Three times the Bears are on "NFL Play by Play Report (NFL Films game of the week) before November 28th. 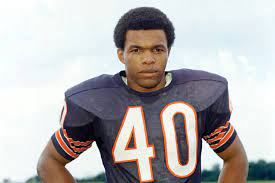 The Bears have caught fire and are trying to catch the Packers and Colts in the west, and are in the "Big Apple" taking on the Giants. Sayers has carried the ball eight times for thirty-nine yards so far in the game which brings his season total to 122 carries for 480 yards...time to grab that pencil or calculator...he is averaging 3.93 a carry.
He has shared time with veteran Jon Arnett at halfback, while Ronnie Bull, and young Andy Livingston also get chances to run. The Bears offense in '65 has undergone a few subtle adjustments in alignments. Wider offensive line splits, with the backs split, or even set in a "trips" wing set. Bob Wetoska, and Mike Pyle are having excellent seasons paving the way for Sayers, while the rest of the lineman are more than adequate at opening holes.
Why the change you ask? Boy oh boy would I relish having the answers, though will surmise that outstanding offensive backfield coach Chuck Mather played an important roll. Chicago beats the Giants and on his last five carries Sayers gains 74 yards. Have never seen film of his 45 yard touchdown run, and that run was a key play in the victory.
The final three weeks of the season Sayers gains 313 yards on just 39 carries? Why he was not given the ball more we will never know? Gale continues to find the end zone as he establishes a new record with 22 touchdowns. Though the youngster has blazing speed, and surprising strength for a 195 lb. back it is ability cut quickly effortlessly, and then accelerate that sets him apart.
Jim Brown knew the torch was about to be passed to the Kansas Comet, and he praised Sayers when he spoke about him. The painful September loss to the Rams cost the Bears an opportunity to win the west, and since all of you know that I will be buried in navy blue & burnt orange would have relished seeing the Browns play the Bears in Wrigley Field on CBS television for the title. Brown vs. Sayers! Bears vs. Browns!
Oh well, we know the rest of the story. Jim Brown retires, and the Bears even with Sayers and Butkus never again win as many as eight games in a season. In closing, and to whet your appetite....next week will take a historical look at the Cardinals.
Posted by TJ Troup at 7:24 AM