When The Legend Becomes Fact

LOOKING BACK
TJ Troup
April of 1962 in the John Ford western the "Man Who Shot Liberty Valance" the newspaper editor (Scott) tears up the notes he has taken from Ransom Stoddard concerning the deceased Tom Doniphon, and Scott's famous quote "when the legend becomes fact, print the legend". How appropriate for the upcoming final season of Chuck Bednarik's career. His saga has a few twists and turns, yet is a testament to consistently outstanding performances on both sides of the ball while demonstrating longevity and durability.

He is the only rookie starter on the defending league champion Eagles offense in 1949, though he missed a couple of games, and played sparingly early. Chuck gets to view a legend early in the season as Chicago Bear center Clyde "Bulldog" Turner shows the young man how the center position should be played. Bednarik proved adept at all facets of center play down the stretch in 1949 and in back to back weeks in November he helped pave the way for Steve Van Buren go gain 379 yards on 62 carries in victories over the New York Bulldogs and Pittsburgh Steelers. |

Bednarik did not start at center in the championship game in the Los Angeles mud in the Coliseum; he started at right linebacker and played well. Watching Chuck blocks on sweep plays in '50 (at right outside linebacker) and 1951 (at left outside linebacker) and continually putting himself in to make the tackle shows he is well on his way to stardom. Bednarik is the best right linebacker (Philadelphia plays the 5-2 defense) in the league during the '52 season. at the point of attack, and superb at underneath zone coverage. He demonstrates athleticism with a one-handed interception in a 10-7 win over the Cardinals in November, and ends his season as the MVP of the Pro Bowl as he returned an interception for a touchdown to increase the Eastern Conference all-stars lead to 13-2 (final score 20-9).
The NFL did not have an award for defensive player of the year in 1953, yet no doubt the two finalists would have been Jack Christiansen of the Lions and Bednarik. Philadelphia led the league in run defense1,117 yards allowed and only 6 rushing touchdowns). Bednarik recorded 9 takeaways (3 opponent fumble recoveries and 6 interceptions). Jack Del Bello of the Colts is in a spread formation in the November the 5th game, and throws his left; Chuck as always is in the proper area of his zone and returns the interception 41 yards to the three yard line setting up a score. Del Bello fires down the middle of the field and far ranging Bednarik nabs the pass and dashes 26 yards for a touchdown. On opening day in 1954, Chuck had replaced Farragaut as the starting center (he goes both ways in week two against the Cardinals), but by the third week of the season he is back at right linebacker. The last four weeks of the year Chuck at the pivot position as the contending Eagles try to stay in the race. Though Bednarik continues to play at an All-pro level; the Eagles are struggling to win. has begun to evolve from the 5-2 to the 4-3 defense. Bob Kelley is now the starting center, and first-round draft pick Bob Pellegrini is rotating in at right linebacker with Bednarik. Since other teams have had success in the 4-3, and Bednarik is the best pursuing outside linebacker in the league. he can play middle linebacker? Chuck moves back and forth from right linebacker to middle linebacker (sometimes in the same game based upon the defense called).

Though adequate at the position, he does not have a strong supporting cast. October 20, 1957, and Philadephia has 10 of their last 34 games. The Eagles are at home against the contending Browns and surprise the future division champions 17-7. Bednarik for the second time in his career pilfers Cleveland Brown passes at key moments in the game. Buck Shaw brings his coaching acumen to Philadelphia in 1958 and though the season is a disappointment; the trade for Van Brocklin and Bednarik's move back to has again given the Eagles the leadership needed to contend.

A revitalized roster in 1959 produces a winning season. Much has been written about Concrete Charley and the 1960 Eagles, but almost nothing written about the Eagles 1961? New head coach Nick Skorich and new starting quarterback Sonny Jurgensen have the Eagles in the thick of contention with Cleveland and New York and need a victory over the Bears to set up the first place showdown with the Giants the following week. Chicago had destroyed San Francisco's spread formation (shotgun) a week earlier. No problem for Bednarik as his quickness at the block continually stymies Bill George. Additionally the Eagles trapping game supplies much needed yardage as bull strong Chuck drives the defensive tackle out of the way for holes in the 16-14 Philadelphia triumph.

Chuck Weber has not given the Eagles the kind of season hoped for at middle linebacker; thus down the stretch Bednarik moves back to defense. The Giants are beaten by the Packers......so a victory today over the suddenly resurgent Steelers would bring a tie for first and another showdown with the Giants. For the final time in his career Bednarik intercepts twice during a game. He purloins a Bukich pass and sets sail for the goal line until he is met offensive tackle Charley Bradshaw in a thunderous collision inside the five. The Steelers have rallied and cut the Eagles lead to four, as the venerable Bobby Layne whips a pass over the middle and again he is picked off to stop an opponent drive with a key interception. Timmy Brown sweeps left for the final score in the 35-24 win. The Eagles reward for second place in the division is a trip to Florida and the Detroit Lions. The final game of the season is a 38-10 loss to the Lions and Joe Schmidt. 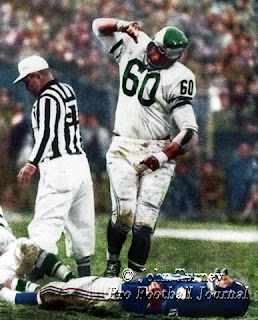 These two veteran warriors are the poster boys for how to play the linebacker position. Instincts, quickness, ability to shed blocks, blitz when necessary, and play your assigned area in underneath zone coverage, but most of all: TACKLE the guy with the ball
Chuck Bednarik receives All-pro recognition on both sides of the ball in '61 at center from UP, and at linebacker from the Sporting News. He returns for one last go 'round in 1962 and the game of October 28, 1962, stands out. Bednarik faces rookie center Mick Tinglehoff of the Vikings. The baton has been passed from one truly great warrior to another. Rest in Peace Chuck, you're a credit to the game.