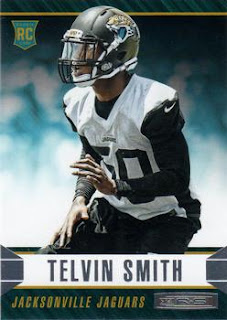 Last year Nick Webster posted on who were the NFL leaders in run and pass stuffs, that is all plays, other than sacks and kneel downs, which is a stat unique to Pro Football Journal. STATS, LLC. does compile run stuffs that include both solo and assisted tackles and Elias Sports Bureau does compile tackles for loss, which is solo tackles for a loss, both run and pass, plus sacks, minus any sack that is a forced fumble and excludes any assists or shared tackles. We don't know why they do that, but they do. But neither compile this stat.

Regardless, here are the 2016 NFL leaders in Run/Pass stuffs through last weekend. 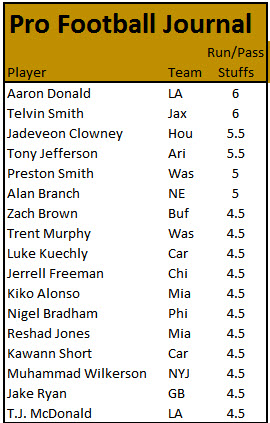 Aaron Donald and Telvin Smith tied last year for 4th and are at the top of the 2016 list thus far. Jadeveon Clowney and the Cardinals Tony Jefferson are next. It's early and we will keep readers posted as the season moves along.
Posted by John Turney at 9:08 PM