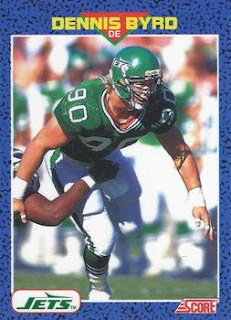 Tragedy stuck Dennis Byrd twice, once in 1992 when he suffered an injury that left him paralyzed for a time and from which he partially recovers and again last week when he lost his life in a collision near his home in Oklahoma.

Byrd had a fine rookie season as a situational pass rusher, coming on the field when the Jets switched from a 3-4 base defense to nickel or dime defenses. He had 7 sacks that season in that role, oneof the better seasons for a designated rusher in Jets history.

The next season, new defensive coordinator Pete Carroll installed a "flop" 4-3 defense, similar to that the Viking ran (where Carroll came from) from 1986-89. It was in that defense Keith Millard was a dominant 3-technique (40 sacks in 4 seasons) and Carroll envisioned Byrd in that role which called for Byrd to play on the outside shoulder of a guard whole the nose tackle was always on the shoulder or head of the center. Byrd would flop to the left or right, depending if it was an 'over' or 'under' defense.Scott Mersereau played the nose/shade tackle in the new defense and Byrd played the 3-technique, which Carroll called the 'Eagle tackle'.

By all accounts, Byrd was on his way to being a star in the Eagle position, recording 20 sacks over the next two seasons along with 11.5 stuffs and a safety. In 1992 injuries on the defensive line caused Byrd to have to play a lot of defensive end that season which ended in the tragic neck injury.