The Bengals had a classic, clean uniform from 1968-80 and they remained mostly the same during that time. There were small changes in the width of pants stripes and in socks and a change in the color of facemasks but the most drastic change was in 1980 when they added TV numbers to the sleeves of their jerseys. They were the last NFL team to add them.

"TV numbers," are those placed on the sleeves or shoulders to assist announcers and viewers in identifying players from various camera angles.
Before: 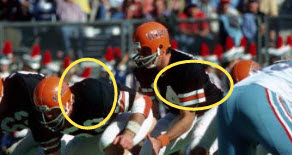 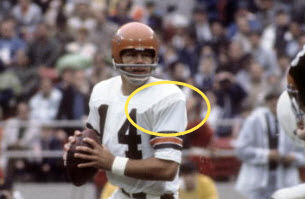 TV numbers were added to the sleeves of jerseys by NFL teams in 1956 when 8 of the 12 teams began the practice.  By 1962 all NFL and AFL teams had them on their uniforms and that continued until 1968 when the Bengals joined the AFL.

According to Bengals.com the NFL did not have a rule requiring teams to place TV numbers on uniforms until 1991, but it was really moot since by 1980 all teams had them.