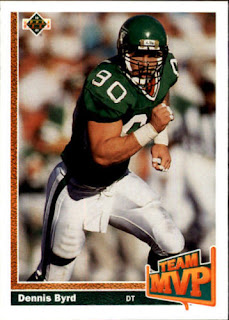 We posted Dennis Byrd's Career Stats yesterday but today we will focus on 1990, his breakout year in which he had 13 sacks in his Eagle/3-tecnique position. 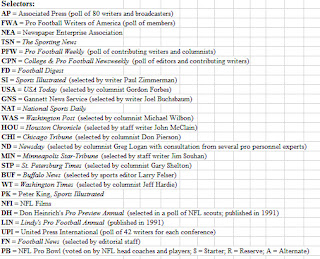 Byrd was a Second-team selection by College & Pro Football Newsweekly but didn't get any other notice.

However, was this a case of someone who didn't get the honors they deserved? Hard to say, Byrd was in the New York market and his prowess was well known, but when reviewing that stats for the players who garnered at least honorable mention All-Pro, Byrd shows well.

In that era some of the All-Pro polls selection one defensive tackle and one nose tackle, others just picked two tackles. Also, some of the voters picked the nickel position for a player, as is the case for both Pierce Holt and Kevin Fagan. Both were starters in the 49ers base 3-4 defense but would play defensive tackle in the 49ers nickel defense which employed 4 linemen, with Charles Haley as one of the ends and Holt and Fagan were the tackles.

Another anomaly for 1990 is Bill Pickel got a vote in the AP poll, but that was odd since Pickel only started three games, all at defensive end for an injured Howie Long. His statistics show that he didn't play a lot of snaps that season and the vote he got seems a bit dubious.


Perry had 23 sacks and stuffs (stacks) while Childress had 18.5 plays behind the line. Byrd had the same as Childress. Henry Thomas had a fine season, one in which Gordon Forbes of USA Today chose him for All-Pro and Larry Felser of the Buffalo News selected him, along with Football News as All-NFC.

Most of the rest are nose tackles and readers can see their stats, often not getting as many big plays often due to where they have to align.

But it seems that among the 4-3 defensive tackles Byrd ranks among the top, and his season certainly ranks as All-Pro quality, if not in name.