Knuckles In The Dirt or Standing Up: Dale Dodrill Got it Done 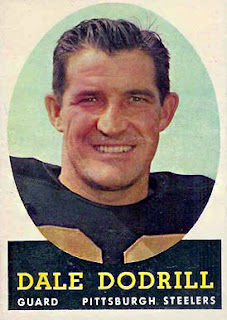 The Pittsburgh Steelers, during the season of 1950, had some strong moments, yet at times their run defense was like a sieve. Rookie middle guard George Nicksich did not play well during the campaign so and with the 67th draft choice for the 1951 season, the Steelers chose Dale Dodrill of Colorado A&M.
Dodrill had served our country in WW II and had a sterling college career, but he wondered if he could compete at the pro level based upon what he had heard and read about East coast football players. Though he started from game one of his career and gave a strong effort, his rookie season was not an effective one. Dodrill broke his nose in a collision with Bucko Kilroy of Philadelphia thus he did not finish the season.

Pittsburgh, under John Michelosen, was still in the outdated single-wing offense, and the defense would improve with an infusion of young tough talent. In the games Dale played in during 1951 he would align at middle guard and sometimes shift to left defensive tackle when Pittsburgh went into a 4-man line. When the Steelers were in their goal line defense Dodrill would attempt to "submarine" the offensive lineman in front of him, and he was not very effective.

The Steelers, in 1952, under the guidance of Joe Bach had an improved offense as Jim Finks passing so well in the victory over Washington to close the '51 season was now in the T-formation. Though the league did not have a most improved player award Dale Dodrill sure would have been a candidate based upon his play in '52.

Not every middle guard in the league used the same style and techniques. Some would align in the gap and penetrate, some would align right up on the center's nose and attempt to drive him back into the offensive backfield, and some would hand fight the center or guard and pursue.

Dodrill is not much of a pass rusher; in fact at times even though the Steelers have a middle linebacker (Darrell Hogan) he drops into pass coverage the opposite side of Hogan. November 2nd, against Washington, Dodrill shoots the gap and blocks George Buksar's field goal attempt. Dale finally is able to grab the bouncing pigskin and is off and running for his first NFL touchdown in the win over the Redskins.

All Steeler fans can talk about the famous 63-7 win over New York in late November, and Dodrill's contribution is again on defense, and in the kicking game. Tom Landry is going to punt from his own end zone, but Dodrill again penetrates into the backfield, goes over Eddie Price to block the punt. George Hays trots into the end zone with the ball as the Steel City Eleven pour it on over the Giants.

The once contending 49ers are beaten badly by the Steelers at Kezar, and Pittsburgh can end the season on the west coast in fine fashion by knocking off the red-hot Rams in the Coliseum. Los Angeles needs a victory to earn a playoff berth in Bob Waterfield's last game. The Rams lead 7-0 and Waterfield is attempting a short field goal. Rangy George Tarasovic flashes in from the left and blocks the attempt. Dodrill grabs the ball on the ten and heads up the right sideline with a Black & Gold convoy. Deacon Dan Towler ends the cross-country trek at the Los Angeles nine-yard line when he wrenches Dale to the turf with a face mask tackle (not a penalty in those days). Finks is unable to get Pittsburgh into the end zone, and the Rams make enough plays to win the game.

Earning All-League recognition is always a player's goal, and the group of men listed at middle guard are a who's who of this era.—Stan West, Bill Willis, Les Bingaman, Bucko Kilroy, and Dale Dodrill.

Coach Bach returns in 1953 and the November game against the Giants again demonstrates Dodrill's outstanding ability to hustle and pursue. Fullback Merwin Hodel catches a swing pass, and fumbles when hit by Flanagan. Dale is right there to scoop up the ball and put Pittsburgh on the scoreboard with his 16-yard fumble return. The Steelers again cannot put a winning team on the field with any consistency.

Dodrill is still the anchor at middle guard in the Pittsburgh 5-3-3 defense and again receives some All-League recognition in Bill Willis's final season. The Steelers, under Walt Kiesling, open up the 1954 season with an improved brand of football and finally beat Cleveland. Dodrill is playing the best football of his career as Pittsburgh is now in the standard 5-2-4 defense. He still has his knuckles in the dirt, and continues to shoot the gap, run the twist with Stautner, but he now will quickly stand up from his four point stance and drop into pass coverage.

Dale is the team MVP in '54 and again earns All-Pro recognition. Pittsburgh must improve their last place ranking in run defense as the 1955 season begins. Dodrill's pass defense instincts from middle guard have improved as he records interceptions in the early season victories over the Cardinals and Giants. The fast start fades as Pittsburgh loses their final seven games.

Watching the heartbreaking loss to the Lions on film allowed me to concentrate on Dodrill. Late in the second quarter with the Lions leading 14-0 Layne attempts a lateral to Bill Stits who cannot find the handle. Dodrill as he has so many times in his five year career hustles to the ball and takes off for an apparent 40 yard touchdown. Wait a minute? You cannot advance a fumbled lateral? No score Dale, and the valiant Steeler rally falls short 31-28.

When the All-Pro team is listed for the 1955 season the organizations now list a middle linebacker, and Dodrill is First-team All-Pro (listed as defensive guard by AP) and garners the most votes ahead of the likes of George Connor, Chuck Bednarik, Bill George, Joe Schmidt, and Les Richter.

January 15th, 1956, we are in the Los Angeles Coliseum for the Pro Bowl game. Dodrill has been here before, yet this is a landmark game as both teams do NOT align with a middle guard. The 4-3 defense is now the preferable defense in the league. The Eastern Conference starter at middle linebacker is Chuck Drazenovich of Washington, and he rotates quarters with Dodrill. Second quarter and Dale demonstrates he was meant to play the position and play it well. He tackles Moegle of the west team on a cross buck after a short gain, and then drops the swift 49er back on screen for a loss of five. The Eastern All-Stars claim victory 31-30.

Walt Kiesling just cannot put a winning Steeler team on the field, and we enter the 1957 campaign with the legendary Buddy Parker at the helm. Pittsburgh continues to play improved run defense each year (finishing 3rd in '57), and the Steelers are a factor in the tight division race during the year. October the 13th at Forbes Field and the 1-1 Steelers must win to stay even with Cleveland. Dodrill is now the veteran leader of a team that fields 15 rookies under Parker. Jack Butler, Ernie Stautner, and Dodrill form one of the best defensive trio's in the league.

Pittsburgh leads 12-6 in the 2nd quarter when Dodrill as he has done before on "special teams" shoots the gap to block Summerall's field goal attempt. Bob O'Neil recovers the bounding ball and scores. Second half as McHan fires over the middle to running back Frank Bernardi, but Dodrill calls a halt to the Cardinal drive as he pilfers the pigskin and sets sail for the goal line. He leaps over prone team mate Aubrey Rozzell and dashes 44 yards (longest Steeler interception return since October of '54) before Bernardi can chase him down in the 29-20 win. Pittsburgh is 4-3, and must beat Green Bay to stay in the race, and on the first play of the game Dodrill intercepts Bart Starr, yet the team falter's badly in the 27-10 loss.

The improved Steelers knock the Giants from the race with a 21-10 December victory, but cannot catch Cleveland yet again. Dale will earn his final pro bowl berth and ranks with the best middle linebackers in the game. The trade for Bobby Layne two games into '58 gives Parker the quarterback he needs. Dodrill intercepts for the 10th and final time in the 24-3 decisive victory over Philadelphia. Pittsburgh's record when Dale intercepted was 8-2. He is 33 years old and begins the year as the starter at middle linebacker in 1959.

The lanky bowlegged Dodrill is listed in programs at 6'1'' and 211 lbs, but as the season progresses he shares time with rookie Mike Henry (who later became TVs "Tarzan"). Late in the campaign he sees less and less playing time in his final year. Graduate history studies at CSU, Fullerton granted me an opportunity to learn from some excellent professors. Dr. Reitfeld would explain and define the word significance for us. He stated that being first, or only was always historically significant. 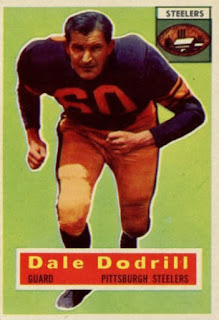 The dictionary tells us that significance is derived from the latin word significantia (force, energy). Later defined as important and consequential. Combining all of this sure helps define Dale Dodrill on his 92nd birthday—he is the ONLY middle guard who became a middle linebacker and earned both All-Pro and Pro Bowl recognition.
Posted by TJ Troup at 7:45 AM