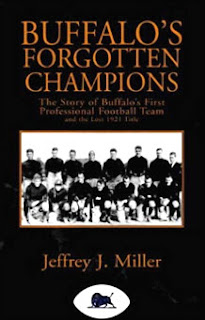 Unfortunately, they all played for the other guys …

The Buffalo All-Americans of the early 1920s were a great team, finishing within one game of the title in each of the league’s first two seasons (1920 and ’21). But despite an overall record of 18 wins and just 2 losses, the All-Americans, perhaps the most talented team ever assembled that did NOT win a championship, boast no Hall of Famers. In fact, there is no one from the team’s entire nine-year existence even sleeping on the hallowed hall’s front lawn.


Former Buffalo Bison fullback Pete Calac was nominated, but more for his connection to the great Canton Bulldog teams of the late 1910s and his association with Jim Thorpe than for his brief tenure in the Nickel City. And though Calac himself didn’t make it in as a player, he did get to stand outside the hall and deliver Jim Thorpe’s presentation speech when the former Olympian was inducted in 1964.


Frank McNeil, the founder and first owner of the All-Americans/Bisons, despite being declared a “pioneer” who “did so much to develop football” by George Halas upon Papa Bear’s 1963 induction, never got closer to the hall than Halas’ enshrinement speech.


espite the fact that the All-Americans/Bisons are not represented in Canton, the rosters of the teams against which they played boasted many football immortals. Grid giants bearing such names as Red Grange, Link Lyman, Fats Henry, Fritz Pollard, Paddy Driscoll, and Jim Thorpe traversed the opposite side of the field against the great Buffalo teams of the Roaring ‘20s. Below is a listing of all the Hall-of-Famers who visited Queen City between 1920 and 1929, with dates of games and a brief description of the player’s performance: 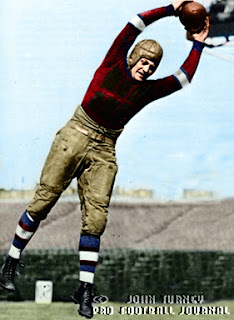 Tuesday, October 12, 1927--The Galloping Ghost of Illinois fame made his first appearance against the Buffalo Bisons a memorable one, scoring on a short touchdown run in leading his New York Yankees to an easy 19-8 victory at Bison Stadium.  Grange only played the first quarter.


Sunday, October 13, 1929--Grange returned to Buffalo as a member of the Chicago Bears, throwing a touchdown pass in leading the Bears to a 16 to 0 win at Bison Stadium. 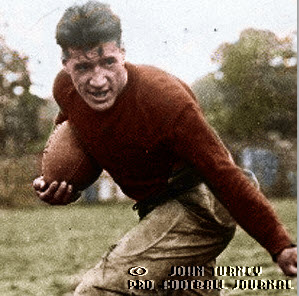 Sunday, November 21, 1920—Guyon, the Chippewa Indian and former teammate of Jim Thorpe at Carlisle Institute, made his first trip to Buffalo as a member of Thorpe’s Canton Bulldogs. Playing before 15,000 fans at Buffalo Baseball Park, the Bulldogs defeated the formerly unbeaten All-Americans 3-0.

Sunday, November 6, 1921—Guyon, by this time a member of the Cleveland Tigers, picked off a pass and raced 75 yards for a touchdown before 7,000 fans at Buffalo’s Canisius Villa.  It was not enough, however, as the All-Americans held on to win, 10-6.


Sunday, November 26, 1922—Having joined the Oorang Indians along with Jim Thorpe, Guyon snagged a 30-yard touchdown pass, along with a pass for an extra point (both from Thorpe), as the Indians rolled to an easy 19-7 victory before 3,000 at Buffalo Baseball Park. 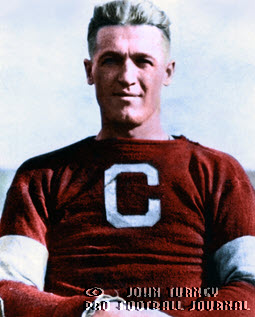 Sunday, November 11, 1923—The Hall-of-Famer who faced Buffalo teams more than anyone else (7 games altogether) in the decade came to Buffalo for the first time as a member of the Canton Bulldogs. Despite boasting two other HOFers on their roster (Fats Henry and Link Lyman), the Bulldogs left Buffalo Baseball Park with only a 3-3 tie for their efforts. 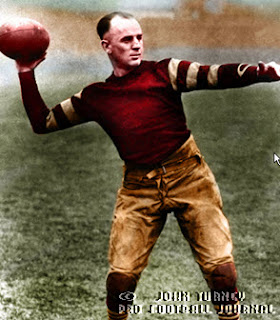 Sunday, October 13, 1929—In the only Buffalo appearance of his career, an aging Driscoll manages a mere extra point as the Bears cruise to a 16-0 victory at Bison Stadium. 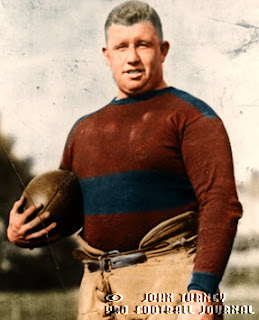 Sunday, November 21, 1920--The three-time All-American from William & Jefferson makes his first appearance in Buffalo at the Baseball Park in helping Canton to a 3-0 triumph before 15,000. 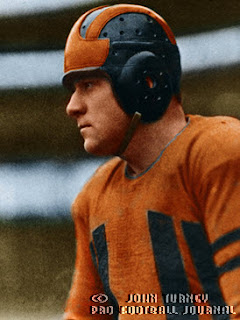 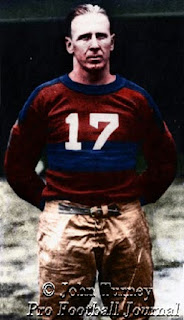 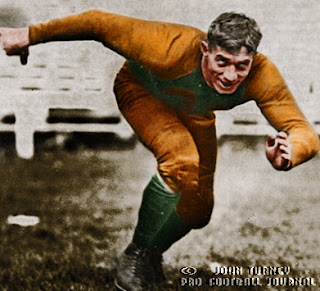 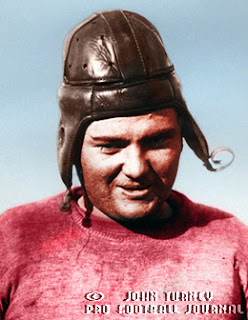 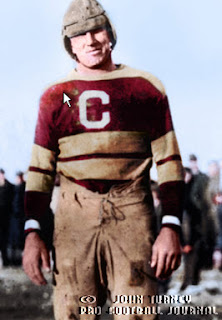 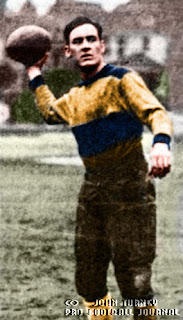 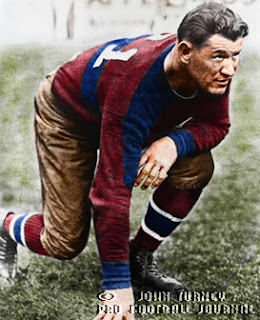 Sunday, November 21, 1920—The most celebrated athlete of his day made his first appearance in Buffalo. Thorpe played just one quarter in Canton’s 3-0 victory before 15,000 at Buffalo Baseball Park.

Sunday, November 26, 1922—In perhaps the greatest exhibition of talent displayed by any visiting player during the 1920s, Thorpe tallied two touchdowns on scampers of 7 and 20 yards, threw for another and capped his performance by tossing a pass for an extra point as his Oorang Indians pounded the All-Americans, 19-7 before 3,000 fans at Buffalo Baseball Park.


Sunday, October 21, 1923—Thorpe’s last appearance in Buffalo as a player proved to be an embarrassment, as the All-Americans skunked the hapless Oorang squad, 57-0 in front of 12,000. Thorpe, in a vain effort to help his team, played the entire game—a rare occurrence for the famed Olympian.

Sunday, December 5, 1920—Pollard is the Hall-of-Famer who visited Buffalo most often (5 times).  In his first appearance in Western New York, Pollard brought the undefeated Akron Pros onto the field at the Buffalo Baseball Park for a game played in a veritable quagmire.  The fleet-footed Pollard, usually a terror with the ball, actually might have cost his team the game when he fumbled a fourth-quarter punt away to the All-Americans.  But the AAs failed to capitalize and the contest ended in a 0-0 deadlock.  The tie was enough to secure the very first league championship for the Pros and the proud city of Akron.


Saturday, December 3, 1921—In a return engagement at Canisius Villa, the Akronites fell 14-0 to the undefeated All-Americans.


Sunday, October 11, 1925—Before 3,500 diehards in an unrelenting downpour at Bison Stadium, the Bisons and Pros battled to yet another 0-0 tie.


Sunday, September 26, 1926—With only 2,500 present as witnesses, the Buffalo Rangers (as they were called this one season) defeated the Pollards Akron Indians, 7-0.  It was Buffalo’s fifth-straight home shutout of a Pollard-led team (which might be a record?). 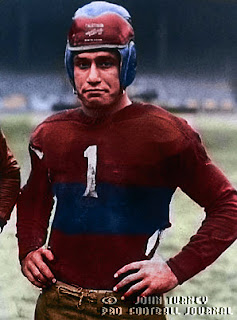 Tuesday, November 5, 1929—at Bison Stadium in Buffalo, Friedman led the Giants to a 45-6 thrashing of the lowly Bisons, throwing two touchdown passes (30 yards to Ray Flaherty and 70 yards to Len Sedbrook) and kicking three extra points.

Tuesday, November 5, 1929—Though perhaps better known for his coaching career with the Washington Redskins, with whom he won two league titles, Flaherty proved he was a fine end as well in catching two touchdown passes as his New York Giants demolished the Bisons 45-6 at Bison Stadium. 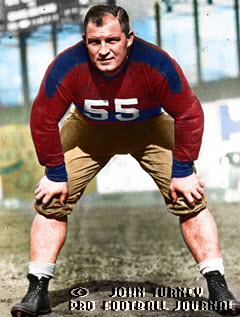 There ya have it … a total of sixteen Hall of Famers who graced Buffalo’s pro football fields during the league’s first decade. As of this writing, there are no members of Buffalo’s original NFL team enshrined in the Hall, but who knows?  Perhaps one day All-Americans’ perennial all-pro guard Swede Youngstrom will take his rightful place alongside the greats against whom he competed during those turbulent years.
***
Historical notes on the Buffalo venues mentioned in this article … the All-Americans' home field for the first two seasons was Canisius Villa, which was located on the grounds of Canisius College at Jefferson and Hughes streets in the city of Buffalo, which had a seating capacity of 12,000.  As bigger crowds were anticipated for certain games, the AAs used Buffalo Baseball Park (located at the block created by East Ferry Street and Masten, Woodlawn and Michigan avenues) three times in 1920.

In 1922 and '23, the team called the Baseball Park home, though playing one game in '23 at Canisius Villa.   Buffalo Baseball Park was demolished and replaced by a new venue on the same site called Bison Stadium in time for the 1924 season, where the newly-named Buffalo Bisons would play their home games for the remainder of the decade.  Bison Stadium would be renamed Offermann Stadium in 1936 and remained home to the minor league baseball Buffalo Bisons until 1960
Posted by Jeffrey J. Miller at 9:50 AM