LOOKING BACK
By John Turney
Sad news today:  Gino Marchetti, the greatest defensive end of the NFL's first 50 years passed away last night of pneumonia. He was 92.

This past March one of his cohorts in crime, Ordell Braase, the end he played opposite for many years also passed away. The news of Marchetti's passing will hit Baltimore and the NFL world hard. He was a truly beloved character.

He was admired by his teammates and his coaches. Weeb Ewbank told his Colt team, right before the sudden death overtime of the 1958 NFL Championship game, "Just go out, block and tackle, keep the ball, and let's win it for Gino". Marchetti couldn't participate because one of his own teammates crashed into his lower leg, breaking, sidelining him for the remainder of the game. 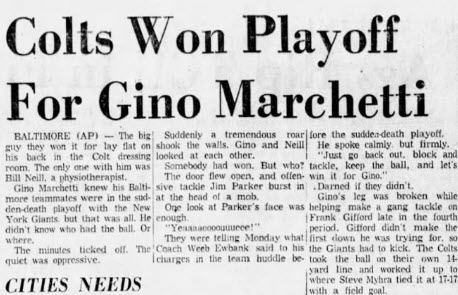 Marchetti was also an extremely successful entrepreneur, opening up a hamburger chain called, "Gino's" which he turned into a multi-million dollar enterprise. The modest Marchetti said, regarding his business success, "I owe it all to (Colts owner) Carrol Rosenbloom. He loaned me the money to start the second store and that is what got things rolling." 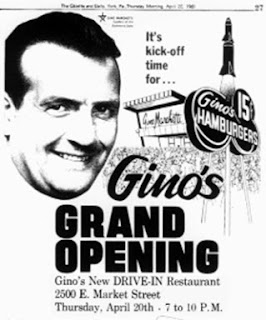 Marchetti began his college football career late, having served in the US 69th Infantry Division, 273rd Regiment, 4th Platoon. and was a replacement at the Battle of the Bulge. We asked him about it since it was a particularly brutal battle but the modest Marchetti told us, "I was a replacement, I got there after the real action. Mostly, I carried a machine gun around. However, the truth is he saw plenty of action, even though he missed much of the early fighting.

His unit did meet up with the Russians at the end of the war—the first American unit to do so.

He played semipro ball for a year and after that, he went to Modesto Junior College, and then he attended the University of San Francisco.

He almost didn't last at USF because when he rolled into campus on a motorcycle and a leather jacket and long hair, slicked back and word got to the coaches that there was a wildman asking where the football field was the coaches almost dismissed him on the first day. He played on the great USF teams that featured Ollis Matson, Bob. St Clair, Burl Toler, Joe Kuharich, and others. Marchetti earned All-West Coast Honors and headed to the NFL.

Marchetti began his NFL career in 1952 for the Dallas Texans (who took him with the first pick in the second round) and then for the Baltimore Colts from 1953-64, and then 1966. Marchetti was a good rookie with the Texans in 1952 even as a skinny 6-4 220-pound end. What little film exists shows a man with excellent mobility and good strength and hustle. He even had three sacks in one game and a couple were with his shoulder in a strap. 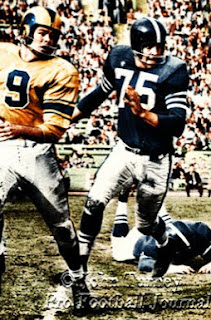 In 1953, his first season with the Colts, he played left tackle. He often said that his experience as a tackle helped his career because he saw what the good ends he faced did and he replicated those moves. However, even with the knowledge, he stated was going to go to Canada to play defensive end but new Colt coach Weeb Ewbank promised Marchetti he would play defensive end from then on.

So, he was back to his natural spot in 1954 and he played well enough to be voted to his first Pro Bowl and he was voted to the next ten Pro Bowls (he missed 1958 with a broken leg).

He employed an unusual stance where he angled in just a bit and crowed the line of scrimmage as much as possible. He said he did that to be able to watch the guard and tackle and the back all at once and see the blocking pattern as well as being able to see if any one of them moved, he'd take off. And he did—like he was shot out of a cannon.

Longtime Baltimore writer told us that he never saw Marchetti ever take a cheap shot. Well, maybe he didn't see it, but we saw a bit of a nasty player on film. Leo Nomellini, a Hall of Fame defensive tackle and a peer of Marchetti said, "Gino had the look of death in his eyes. He'd knock blockers down like ragdolls. It's just a good thing his parents brought him up right".

George Allen agrees, "Gino wasn't the cleanest player ever. He intimidated players and would give them an extra lick". But Allen added, "Gino came along before Deacon Jones but wasn't as fast as Deacon, but he was meaner and fast for his size. . . . but he was a great pass rusher and was great against the run, too. He was just so strong and so tough and so dedicated you could never stop him."
He was First-team All-Pro nine times and a Second-team All-Pro and eleven-time Pro Bowler and in 1958 he was the AP Lineman of the Year, sort of, but not exactly the precursor to the Defensive Player of the Year Award. That year he was credited with 43 hurries (often misreported as sacks) and helped the Colts win the first of two NFL Championships.

Sid Gillman once said that Marchetti was, “The most valuable man to ever play his position”. Marchetti was a “grabber and thrower” according to Paul “Dr. Z” Zimmerman and PFJ's film study shows that as well. He would get his hands on the outside of the shoulder pads of the offensive tackle and he’d throw him whichever way the tackle was leaning, using the motion of the tackle against that tackle and that would free Marchetti to get to the quarterback.

He was also very skilled at closing running plays going up the middle or just to the off-side of the ball. We've seen him do that as many as six-eight times in one game.

We don’t have complete sack data on Marchetti’s career but we do have the key years of 1960-64 and he had at least 56.5 in those five seasons. He claims that on opening day, 1957 he trapped Bobby Layne attempting to pass seven times. Film shows four for sure, and there is one that is not shown on the reel, so it is possible he had five, but in any event, it was his best-ever day in terms of sacks.

Marchetti was going to retire after 1963, actually, he DID retire but it was reported that Don Shula talked him out of it and he came back and had a fine 1964 season. He worked particularly hard in early 1964 and in camp ran a 4.9 forty-yard dash—at age 37. He made All-Pro in 1964 and then retired for the second time only to be talked out of retirement again 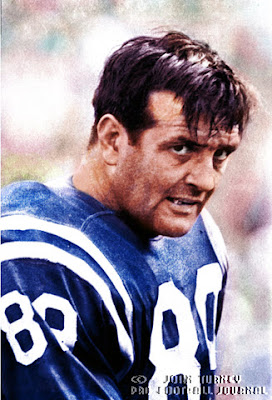 This time it was in 1966 as a “favor” to Colt owner Carroll Rosenbloom to back up an injury savaged Colt defensive line. That final year he played some defensive tackle as well us usual end position.

Said longtime Colt executive Ernie Accorsi, “He had just unbelievable quickness and when he got near the quarterback he was like a 747 banking toward the landing. The great ones have an instinct for closing like that. For years, for All-Time teams, you could stir up debate at most positions but no one ever questioned that Gino was the best defensive end. There was no debate”.

Hall of Famer Jack Youngblood "When I came into the league Deacon Jones and Merlin Olsen took me under their wing. Both of them told me to watch films of Gino and others. Mickey Dukich, the Rams film guy, had reels of the top pass rushers—Deacon, Gino, Willie Davis, all the greats and the two I watched the most were Deac and Gino."

"They both played left end, as I did so that drew my attention and as I watched I was fascinated by those two. Gino had tremendous hand strength and great initial quickness—a great takeoff. He'd crowd the line, get off quickly and when he got his hands on a blocker it was over. Gino'd just toss him to one side and be free to get the quarterback."

In 1993 Don Shula told Sports Illustrated, "Gino Marchetti revolutionized defensive-end play. Most of them were bull rushers in those days, but Gino was a grabber and thrower, a guy with moves who'd blow by the tackle so fast sometimes that he'd never touch him."

Bob St. Clair, who was a college teammate but also an NFL rival said, "He's the best I've ever seen. We came from the same college but had a great rivalry. He was so far ahead of the rest, second place is far down the ladder." Jim Ringo added, "Oh my God, who's better than him?" And Forrest Gregg added kudos by telling Sporting News that Marchetti was the toughest defensive end he ever had to block.

Marchetti will be missed by PFJ, we thank him for the time he gave us in interviews and the knowledge he gave us in those conversations. Say hello to Deacon and Reggie Mr. Marchetti.