Phil Villapiano—Caught in a Logjam 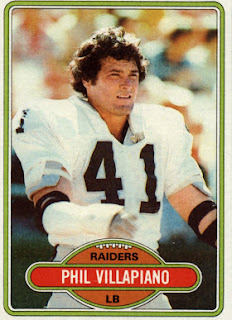 Sometimes a player can play in an era where there the talent is deep at his position. Such is the case for Phil Villapiano. He came into the NFL in 1971 out of Bowling Green as a linebacker with good speed but not a lot of upper-body strength (based on film study) but worked his way through that weakness and became a strong player at the point of attack.

He earned a starting spot as a rookie on the Raiders as a rookie and held it through 1979. He missed the 1977 season (most of it due to a knee injury). In 1971 he was All-Rookie (UPI) and totalled 107 tackles and picked off a pair of passes.

In 1978 he moved to the right side, allowing Ted Hendricks to move to his normal strong side (he'd been playing the right side for a few years since being acquired by the Raiders in 1975). So that year was an adjustment for Villapiano. The next season was another adjustment.

In 1979 he moved inside and fared well and was looking forward to 1980 but that was when he was traded to the Bills for Bob Chandler and was a backup for them for a few years, providing leadership more than anything else, though he started four games in 1981.

Five-times he was First-or Second-team All-AFC and went to four Pro Bowls. However, those numbers would be higher but he was stuck behind names like Jack Ham and Ted Hendricks. And in the early 1970s, Bobby Bell was around and in the late 1970s Robert Brazile was making his mark.

And for All-Pro honors and All-Decade consideration (where both conferences are represented), there were names in the NFL like Chris Hanburger, Isiah Robertson, Matt Blair, Brad Van Pelt, and others. Yes, it was a good decade for outside linebackers in the NFL.

Through his starting days, Villapiano averaged over 100 tackles a year and a few sacks and close to 10 passes defense, spending much of his time taking on the top tight ends in the NFL as a strong-side 'backer.