BOBBY DAN DILLON: Ranging the Field Far and Wide to Stop the Ball in Flight. 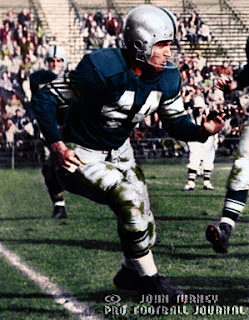 The 1951 Green Bay Packers after a solid 3-2 start lost their final seven games of the year. Playing a 5-3-3 defense the Packers struggled all year defending passes, and as such finish dead last in the defensive passer rating category at 75.0. No team wins in the NFL when they allow 8.10 yards per pass and a league-worst 25 touchdowns pitched against them.

One of the reasons for the dismal showing was the poor play by safety Harper Davis(his last year in the league). Green Bay chose Bobby Dillon with the 28th pick in the draft to help solve their pass defense issues. Raised on a farm in Pendleton Texas; he was an All-American at the University of Texas. Green Bay used both the 4-3-4 and 5-3-3 defense in '52 and were a much-improved team on defense. John Martinkovic led a savage pass rush that set a team record that still stands by taking down enemy passers for 443 yards in losses. Green Bay with a record of 6-3 felt they were contenders till they faded down the stretch.

How much did rookie Bobby Dillon contribute to the improved team effort?

He played very little in the first two games, but in week three he starts at home against the defending league champion Rams and their vaunted passing attack. Los Angeles faces a 3rd and 35 situation on their opening possession as Van Brocklin drops back. The Dutchman fires and Dillon intercepts. The Packers drive 68 yards and score.

Future Hall of Famer Bob Waterfield brings the Rams back with a stirring fourth-quarter comeback and beats Green Bay 30-28. Dillon has played well in his first start and continues to improve during the campaign. He is almost always aligned at left safety when Green Bay is in a four-man secondary. Dillon contributes interceptions in the wins over Philadelphia and New York, and everyone who followed the game, and this team, in particular, knew the young Texas Longhorn had a very bright future.

The Packers in 1952 finished 8th in the defensive passer rating category with a mark of 58.5 and teams learned that throwing deep against Green Bay was not going to be as easy as days past. 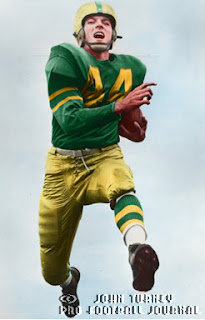 The optimistic Packers enter the '53 season knowing they will have six games on the schedule against the always powerful Rams, the best 49er team every, and the defending league champion Lions. Green Bay just does not have the talent and depth to beat these teams, and as such plummets to last place in the division (only team they could beat was the fledgling Colts). Dillon has changed positions to right safety, and has his first all-pro season.

His best game by far is on Thanksgiving Day in Detroit as he ties the league record with 4 interceptions. Dillon's three first-half interceptions have helped the Packers maintain a 15-7 lead over Detroit, and he pilfers his fourth on the opening Lions drive of the second half.

The Elias Sports Bureau lists the record holders in the league manual each year. Not sure why; as on page 12 of the '64 manual is the listing of every player who intercepted 4 passes in a game, and Dillon is not listed? He was the sixth player in league history to intercept four in a game, but he did it against the defending league champions, the other men did not.

Dillon is injured late in the game(his misses the final two games), and Detroit rallied to win. He ranks among the league leaders with nine interceptions, and the Packer secondary finishes 5th in the defensive passer rating category with a mark of 50.4 (league average was 53.6).

Lisle Blackburn takes command in '54, and after eight weeks the team has shown improvement and is at the break-even mark of 4-4. The early season highlight for Dillon is on the road in Philadelphia for a Saturday night showdown against the Eagles.

Late in the 1st quarter, Bobby ranges to his right and nabs Adrian Burk's errant pass, and weaves his way 49 yards to score. Green Bay goes on to win 37-14. Again the Packers can not sustain success and lose their last four—allowing 119 points in the process. When safety Val Joe Walker is injured, Dillon is moved to left safety and rookie Gene White starts at right safety (his only year in the league). Not sure why the Packers did not just keep Dillon at right safety, and play White at left safety, and though Bobby gives a valiant effort, he just cannot do it alone.

Gene White is just not an NFL caliber safety. Walker returns for the final game of the year against the Rams as Dillon returns to his usual post. He plays another of his strong games as he reads Van Brocklin's eyes, and flashes in front of the receiver to intercept early in the 2nd quarter. Bobby returns the ball to the Los Angeles twenty-two, and the Packers score immediately to tie the game. The Rams rebound and win 35-27.

The Packer secondary struggles during the '56 campaign with the exception of Dillon. He plays outstanding football against the Colts on October 14th, and his fourth-quarter interception against the Lions on Thanksgiving locks up the victory for Green Bay. Dillon is again all-pro and after the first five games of '56 he becomes the third player in NFL history to intercept 30 passes over a 40 game span. Who are the first two men to accomplish this amazing feat? None other than Hall of Famers' Emlen Tunnell and Richard "night train" Lane. Green Bay finishes a disappointing 10th in the defensive passer rating category in '56 with a mark of 71.1 (league average 59.6).

A re-furbished stadium for the Packers opens the '57 campaign, and a victory over the hated Bears. Green Bay can win only two other games during the year. The Packer offense struggles in Blackburn's last year, and the run defense is dismal. Dillon and rookie Johnny Symank play stellar defense though as the Packers rank second in the defensive passer rating category with a mark of 51.2. The reason for the listing after each season is to show that every year Dillon intercepted 9 passes the Packers ranked in the top five in the defensive passer rating category. When he did not......Green Bay struggled.

Opening day 1958 at home and after two Rick Casares runs Ed Brown passes, and Dillon not only intercepts he dashes 37 yards for the fifth touchdown of his career. He has now tied Warren Lahr as the only men to do so in a career.

Much has been written about the disastrous 1958 season in Green Bay, yet Dillon again plays well  (he intercepts in their only victory of the year). The Packers plummet to dead last in the defensive passer rating category with a mark of 86.1. Seven years in the league and Bobby has a hard-earned reputation as a polished pro who gives his all, and plays masterful pass defense, BUT it is a team game and Green Bay is at the bottom.

Enter Vince Lombardi to lead Green Bay out of the wilderness. Surprisingly Dillon just does not play well in '59, and though he plays every week, he looses his starting post at right safety. Dillon retires after the winning season though many believe he could still do the job. Dillon retired with 52 interceptions (still the Packer team record), and was tied with Jack Butler for second on the all-time list behind Emlen Tunnell. 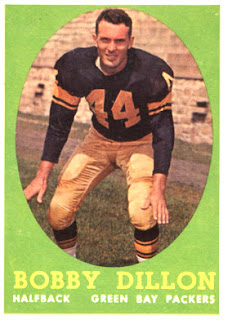 Evaluating Dillon on film is a joy; he was very fast (track champion for the Longhorns in college), and was instinctive as he ranged far and wide to the ball on pass defense. His vision issues (eye sight in one eye was very limited) did not keep him from covering ground against either the pass or run. Dillon took excellent angles in defending the run.

He was a willing run defender, and a solid tackler. Very rarely do you see him with any eye-popping hits, but usually he got the job done----especially when a runner would break into the clear, and Dillon with a burst of speed would hustle across the field and take the runner down, or knock him out of bounds.

Stated above he played both left and right safety, and in 1958 he switched to corner against San Francisco late in the season when both corners were playing poorly. He went to the coaches at half-time and suggested the switch. Arthur Daley details this in his superb column in the Green Bay Press Gazette. Late in the game you see Dillon intercept a John Brodie deep pass up the right sideline. Harlon Hill was a force to be reckoned with in the mid-'50s and he torched many a defender on deep patterns. Dillon would move over to help the corner and as such this is the first "roll weak" pass defense used a high percentage of the time against an All-Pro receiver.

Watching film of Dillon defending Hill is impressive. Yes, Hill does get some catches, yet he never had the games against Green Bay that he did against other western conference opponents. Bobby Dan Dillon was a versatile, dedicated defensive back who attempted to "cement" the Packer secondary each week. He set records that still stand. What records are those you ask? He is the only defensive back to return interceptions over 100 yards for six consecutive seasons. Seven men have intercepted at least 10 passes against two different opponents in a career, but Bobby Dan is the only player to accomplish this against THREE different teams (Colts, Lions, and Bears). Dillon passed away at the age of 89 just months before he was elected to the Pro Football Hall of Fame. Would have relished listening to Bobby Dan speak of returning to Temple Texas, and detailing his career in Green Bay.
Posted by TJ Troup at 8:48 AM