LOOKING BACK
By Jeffrey J Miller 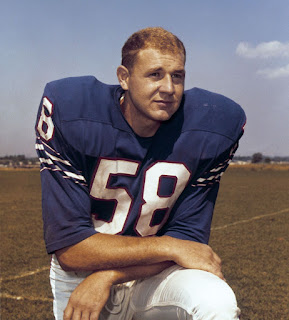 
It was with great sadness that I learned of Mike Stratton’s death earlier this week (March 25, 2020).  He was not a household name like other football players such as Tom Brady, Joe Namath or O. J. Simpson.  In fact, I’m quite sure if I mentioned his name to my wife—no football fan there—she would look at me with those beautiful eyes of hers and blandly reply, “Who?” Even to most modern-day casual fans, Stratton’s name might not ring any bells, for his playing career ended some 47 years ago.  Stratton’s passing, however, resonated with true football historians and thousands of long-time fans across what we colloquially refer to as “Bills Country.”  It certainly resonated with me.


I first became aware of Stratton when I was eight or nine years old. At the time, the Bills stars were O. J. Simpson and Jack Kemp. I was unaware of the team’s championship years, which had occurred when I was only three and four. The Bills had pretty bad teams in 1969 and ’70, so familiarizing myself with these guys was not a priority. But as I became more of a fan and started collecting bubble gum cards, my knowledge and interest continued to grow. When I would get a card of a player with whom I was unfamiliar, I would ask my Dad about him. My Dad, a hardcore football fan who instilled the love of the game in me, was usually dismissive of the players on the team at that time, but not Stratton. I remember him telling me how great Stratton was “in his prime.” He said something to the effect of, “He was a great player but he’s getting old now.” This was 1970 or ’71, so I suppose he was right to some degree, but I had Stratton’s card, so he became somebody I followed, nonetheless. 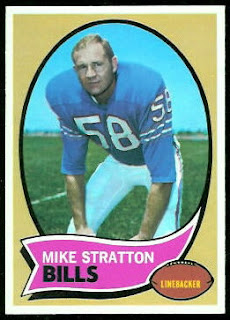 Stratton, I eventually learned, was a legend in Bills Country. He was the last remnant of the Bills’ back-to-back championship teams of 1964 and ’65. Unfortunately for this neophyte, my awakening came far too late to enjoy Stratton’s greatness. By the time of my discovery, he was already past his prime, and would be traded to the San Diego Chargers after the 1972 season. Even then, I recall being very saddened by that, since I had already developed a soft spot for the former great. My affinity was purely sentimental, since I wasn’t fully aware of his accomplishments until years later.  He was a great player and, as I learned later still, a really great guy, when I had the pleasure of interviewing him for my book on the Bills’ American Football League era, Rockin’ The Rockpile. 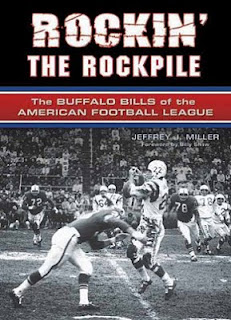 Stratton had come to the Bills as a tight end out of the University of Tennessee. He recalled that had it not been for Buster Ramsey, the Bills’ ill-fated first head coach who was himself a native of the Volunteer State, he probably wouldn’t have been drafted by the Bills.  “Ramsey was very sympathetic to people from Tennessee,” Stratton told me during interviews for the book, “and I would expect that if it hadn’t been for Buster, I would not have been drafted by Buffalo.”
By the time Stratton got to Buffalo, however, Ramsey was gone, and Lou Saban was now the team’s head coach.  He recalled a cold reception at his very first practice. “When the coach called everybody’s name and what we were going to do, he didn’t call my name. I went up and asked him, ‘Where do I go?’  He said, ‘What was your name again?’ I figured I was in a little trouble at that time.”  Drafted as a tight end, Stratton was instructed to group with the defensive ends, but a rash of camp injuries resulted in another move.  “Apparently, they got several linebackers hurt and they switched me to linebacker, and I couldn’t have been happier.” 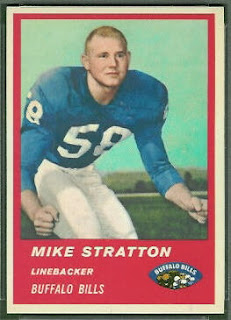 Neither could the Bills. Stratton eventually won the job as the team’s starting right (weakside) linebacker, and retained a firm hold on the position for the next decade.  Between 1964 and 1969, he earned six trips to the AFL All-Star Game and appeared in three AFL championship games, winning two.  He recorded 18 interceptions during that time and was part of a linebacking corps (along with left linebacker John Tracey and middle linebacker Harry Jacobs) that started 62 consecutive games, which was a professional record. He was also a part of a defensive unit that between 1964 and ’65 went 17 straight games (16 regular season and one playoff) without surrendering a rushing touchdown—another record that still stands. 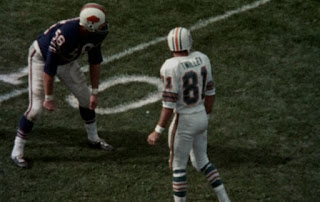 
It was during the 1964 championship victory over the San Diego Chargers that Stratton left an indelible mark on the collective memory of thousands of proud Buffalonians. When I was writing Rockin’ The Rockpile, I had my choice of literally hundreds of photos to put on the front cover.  However, there was really only one choice, one perfect shot that captured the spirit of those championship years. Robert L. Smith’s impeccably timed photo of Stratton milliseconds away from destroying Keith Lincoln’s ribs in what became known as “The Hit Heard ‘Round the World” is perhaps the most famous image ever taken during the AFL years, and it worked on so many levels.  First, it captured the game-changing tackle that effectively put Lincoln out of the game and changed the momentum which, up to that point, belonged to the Chargers. Second, its timing could not have been better, as Stratton’s blurry image closes in on a helpless, airborne Lincoln, and everyone seeing it knows exactly what is about to happen. Third, and perhaps the most overlooked aspect, was that it shows Stratton’s perfect form. Stratton was a prototype linebacker, the kind coaches dream of having on their teams.  His technique, whether in pass coverage or playing the run, was outstanding.  In his 11 seasons with the Bills, it was rare indeed to find him out of position. In this tackle, we see him lowering and turning his head to the side, shoulder careening toward Lincoln’s midsection, arms outstretched and ready to wrap up his prey.  Beautiful!


For these eyes, I also see a parallel to the historic photo of Johnny Unitas in the 1958 NFL Title Game. That photo, taken by Robert Riger on December 28, 1958, in New York’s Yankee Stadium, is the NFL counterpart to the Smith photo, being perhaps the most famous image ever for the senior league. Both photos capture not only the game’s essence beautifully, they are both shot in monochrome and capture the gray backdrop of games being played in cold, dreary, ancient stadiums by mud-caked men who put pride and team before money. Ironically, Stratton and Unitas ended up as teammates on the San Diego Chargers in 1973, two former greats playing out the string, mere shells of their former selves heretically adorned in those powder blue uniforms. 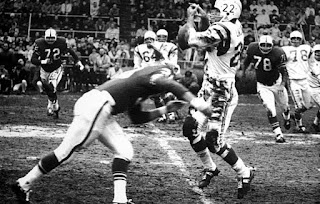 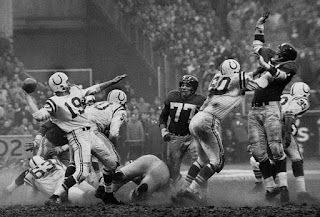 John Unitas about to uncork a long one versus the
New York Giants in the 1958 NFL Title Game.
(Robert Riger)

Mike Stratton leaves us as one of the Buffalo Bills’ all-time greats. As a testament to the respect he earned on the field, Stratton was named to the American Football League All-Time Team (second unit) compiled by the Pro Football Hall of Fame in 1970 (while he was still an active player). He was enshrined on the Bills’ Wall of Fame in 1994, and the Greater Buffalo Sports Hall of Fame in 2005.  Stratton was named to the Bills’ 50th Anniversary team in 2009.
Posted by Jeffrey J. Miller at 11:53 AM