And Now For Something Completely Different, Part II

The passing of Hank Aaron certainly was sad and gave me great pause because like millions and millions I watched on television as he hit his 714th and 715th home runs, trying and breaking Babe Ruth's vaunted record.

In reviewing his career it was clear that he was the better hitter between himself and my favorite baseball player—Willie Mays. In the late-1960s Mays just got old, he slowed down, got injured. And with the Mets he was a part-time player who slumped early and late in both 1972 and 1973 (though his mid-season stats were decent).

So, while Hank was still hammerin' and Willie fell behind.

However, that is a topic for another day.

A couple of weeks ago a Twitter account I followed asked to post great seasons for athletes 40 years of age and older (in reference to Brady and Brees and other older quarterbacks). My response was Willie Mays' 1971 season with 18 home runs and 23 stolen bases.

What I didn't do is look at that 1971 season in-depth, comparing to other MLB seasons of players 40-and-older.

Here that in-depth look with charts from Stathead Baseball.

After all these years, Mays' 18 home runs at age 40 is still tied for 20th all-time for players 40 and over. At the time it was third.

Mays' 23 stolen bases are tied for eighth all-time for players of 40 and over. 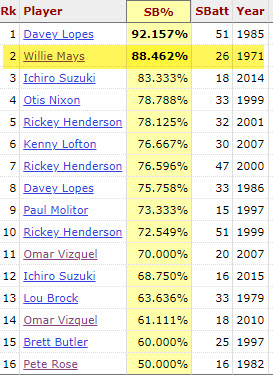 Mays had five triples in 1971, tied for 13th best-ever. And eight ahead of him are not really comparable due to eras. In the integration and live-ball era, he ranks much higher. 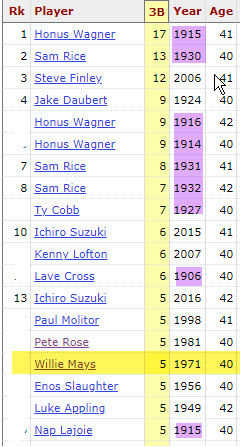 Mays led the NL in walks and that total is 4th best ever among old guys. 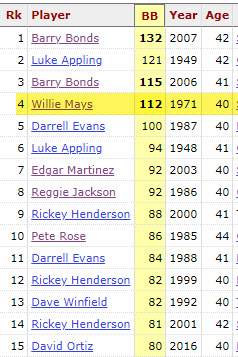 Mays also led the NL in on-base percentage and that, among 40+, ranks in the top six ever— 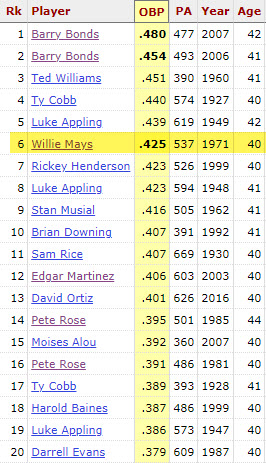 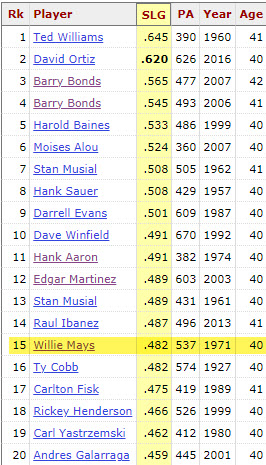 His OPS is ninth— 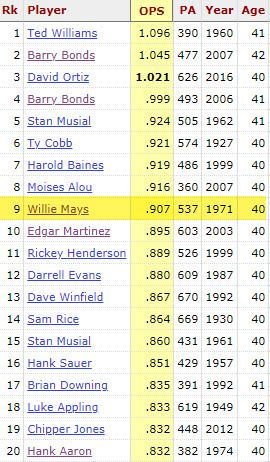 No, we've buried the lede—His WAR is the best all-time for the geriatric crowd. 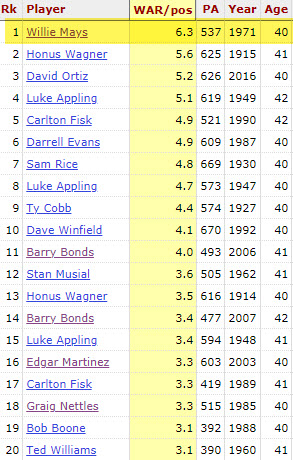 And his power-speed number is also tops -definition from BR

There are probably more stats. But 1971 was truly an A-Mays-ing year for Willie. The Giants won the West and lost to the Pirates in the NLCS.  He played a lot at first base and as can be seen at 40 he did a lot of things (power, speed, getting on base) than a lot of younger players couldn't and didn't do.
Not only that Willie sported orange-striped Adidas spikes, the first-time he wore something other than all-black in his career, and the looked great (see photos at top of this post)
In the age of Drew Brees and Tom Brady, here is a tip of the glass to the Sey Hey Kid.
Posted by John Turney at 9:19 AM