Off and on for the past twenty-five years I’ve researched the life and career of Red Grange. I’m always looking for anything and everything about the Galloping Ghost. Most of my research was used for my biography on him that was published in 2019. Little did I knew that I would find more material from an online source.

I was doing research on Florida Memory, the website ran by the State Library and Archives of Florida. Within their library that had material from the William A. Fishbaugh Collection, a well-known photographer in Miami during the decades of the 1920’s to the 1940’s. Within this collection I found a treasure trove of photos.

I was surprised and ecstatic to see what I found. Fishbaugh was working in the Miami area when Red Grange and the Chicago Bears visited Coral Gables to play during the famous 1925-1926 barnstorming tour. He took some great images of one of the greatest events in NFL history.

After World War I the state of Florida saw a land boom in real estate that had never been seen before. With more time and money to spend, Americans ventured to Florida to buy up land in the sunshine state. By 1925 the state’s population exceeded 1.2 million residents. It was an area that was growing. C. C. Pyle, Red Grange’s manager, saw it as an area primed for making money by presenting events (a pro football game) to well-to-do customers.

Back in November of 1925, as Grange was finishing up his collegiate career at Illinois, Pyle traveled to Miami he met with Henry R. Dutton, recreational director for the city of Coral Gables. After 48 hours of negotiating the two finally came up with an agreement. Dutton said: “We feel justified in predicating that Coral Gables will be able to stage the greatest program of post-season football in the history of the game.” Tim Callahan, a former Yale guard who was team captain in 1920, was hired by Dutton to coach the team. The plan was for Coral Gables to build a stadium that would have a capacity of 20,000.

As for the split of the gate Pyle held all the cards. He had the “star” that everybody wanted to see. Dutton gave in to the demands. Pyle drew up a standard three-page contract- which he would do for all the stops on the southern and western games. For this stop he asked for a guarantee of $25,000, an unheard of sum for a pro football game. Pyle asked for $5,000 up front on the day the contract was signed and the rest ($20,000) deposited in the Illinois Trust & Savings Bank by December 19th. Pyle then got 66% of the gate receipts. The game was set for Christmas Day 1925. 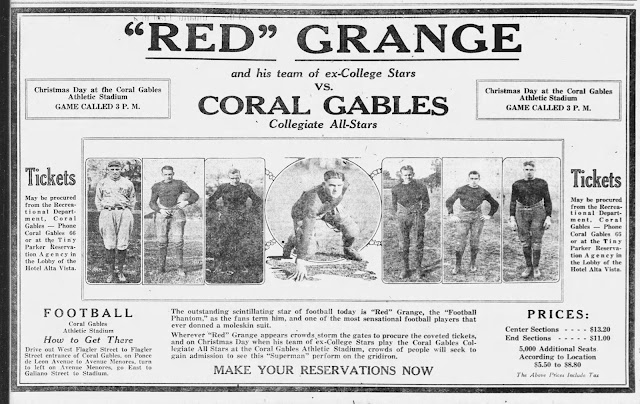 They could be purchased at Tiny Parker Reservation (Ticket) Agency located in the lobby of the Alta Vista Hotel. Arriving in Coral Gables, a town roughly six miles from Miami, Red and the Bears stepped off the train at 4:30 p.m. on Dec. 23rd, as the team was met by fans and a police escort to the hotel. Later that evening Red, Pyle, and the whole Bears team attended a banquet held at the Coral Gables Country Club. Hosted by the Illinois Alumni the 200 guests, including the town’s mayor Edward Dammers, toasted Red. The evening was followed by a night of music and dancing.

The following day the Bears conducted a workout. When they visited the empty field where the game was to be played what they found was hundreds of busy workers building a stadium on four and half acres of land. Work started on the stadium just two weeks earlier, but it wasn’t until Dec. 16th that the construction crew got really busy. Crew Supervisor J.W. Ricketts oversaw 82 large trucks who hauled lumber and supplies to the site. His staff included 400 workmen, working 8-hour shifts to have the stadium ready by Christmas Day. A chef was hired to prepare sandwiches and hot coffee for the laborers. Each day saw 100,000 feet of lumber sawed and put into place with 35 tons of cast iron pipe laid. When the stadium was finish 600,000 feet of lumber had been used with 250,000 riveted bolts. The U-shape arrangement of seats stretched 1,120 feet around the eastern, northern and western side of the stadium in 17 sections. Coral Gables Stadium was completed at midnight on Dec. 23rd with the final touches to the stands that would seat 16,000 spectators. Seats rose up 24 rows, some 66 feet from top to bottom with a press box.

Also at the site was photographer William Fishbaugh. The 51-year Fishbaugh was a well known photographer in Miami, mainly doing photo work for land developer George Merrick, who had developed Coral Gables in the 1920's. Fishbaugh's images sold the town to the buying public who wanted to live in the Florida sun. At this time Fishbaugh was assigned to shot photos of the stadium being built and the Grange football game.

For the next few days Fishbaugh took photos of the stadium being built. 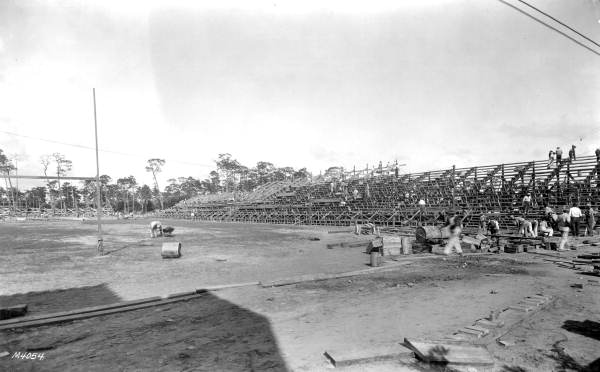 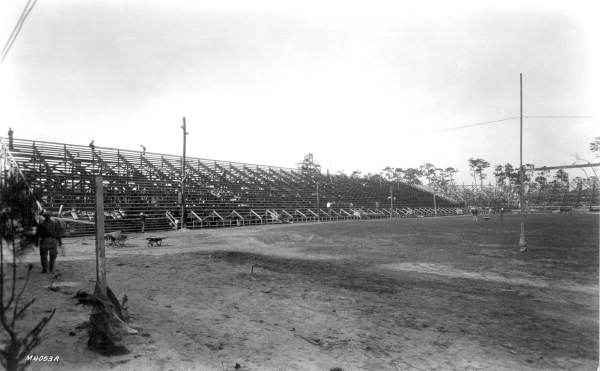 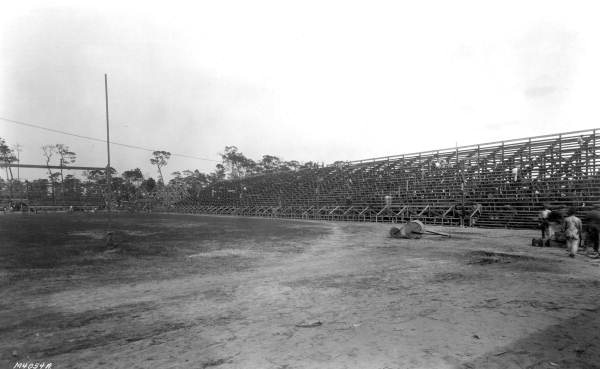 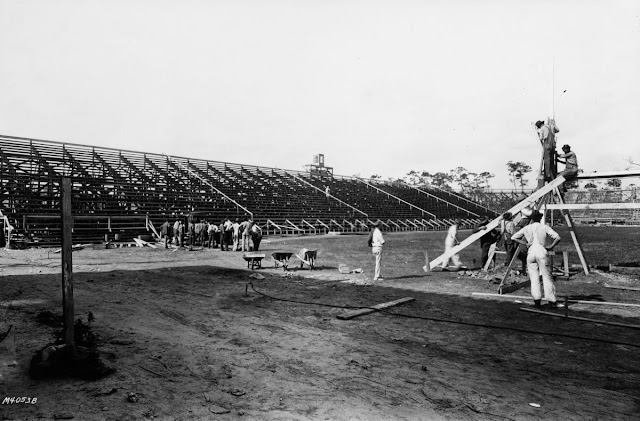 At the workout Red suffered a black eye. During one play he ran smacked into the elbow of one of his teammates. The swelling mark under his left eye showed that the sport wasn’t even easier in the Florida sun. The Coral Gables All-Stars were hand-picked by Tim Callahan. His roster featured some very talented players from three NFL teams- the New York Giants, Pottsville Marrons and the Frankford Yellow Jackets:

Game day arrived on Christmas Day. The crowd was a big disappointment. Newspapers reported that half the stadium was filled with 8,000 spectators. In the press box to cover the game were Larry Dailey of the Chicago Herald-Examiner, Jack Sell of the Miami Herald and Steppy Fairman (Winnipeg Tribune). The 3:00 p.m. kickoff saw the weather rather warm and the newly sodded field more sandy than grass as players would call for the water bucket many times.

Fishbaugh was there again with his camera. During the pre-game he shot a wide angle of the flag raising ceremony, as well as the captain hand shake between the Bears George Trafton and the All-Stars Charlie Barry. He also captured Red Grange kneeling on the sidelines. A great image of the Galloping Ghost during his famous tour.

As for the game the small crowd saw a defensive battle with little thrills- although they were given a chance to have better seats. Midway through the first quarter the Bears called a timeout. Larry Dailey of the Chicago Herald-Examiner wrote: “The spectators on the end section ($11.20 tickets) were invited to occupy the middle stands (midfield seats at $13.20 tickets), which were not half occupied and they made a wild scramble for more advantageous seats.” After just one carry in the first quarter Red came alive in the second. His first big carry went for 22-yards. To finish off the drive Red plowed through for a 4-yard touchdown. That was all the scoring for the day. In the second half Red thrilled the fans one last time with a 52-yard scamper. The Bears won 7-0.

The Miami News reported that Red had 9 carries for 94 yards and that the game, “proved dull and uninteresting to the small crowd of football fans who braved the top prices of $5.50 to $13.20. which were tacked up as an entrance fee.” But it did praise the redhead, “Dixie has seen the most talked of football player in America in action, and Dixie was not disappointed. Grange is still Grange, there is no other. 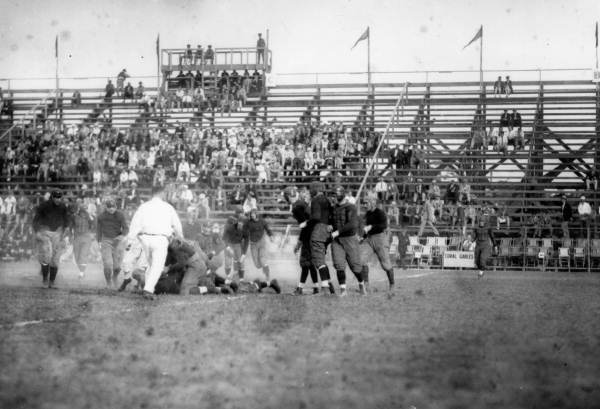 Although the crowd was small Red, Pyle and the Bears still made out. The $25,000 guarantee made sure of that. The typed-up statement had the total gate at $20,725.91 which 66% went to the Red-Pyle-Bears group. In the end Coral Gables and the city of Miami refused to pay the obscene ticket prices to make a bigger gate. The guarantee was enough for the tour to make a profit, but Dutton and the city of Coral Gables did not. After the game the stadium was torn down to make way for more housing. The tour was now headed to Tampa.

Fishbaugh’s action shots were a little too wide to get in close. Both teams wearing dark jerseys didn’t help too.

I was very pleased to find these important images. 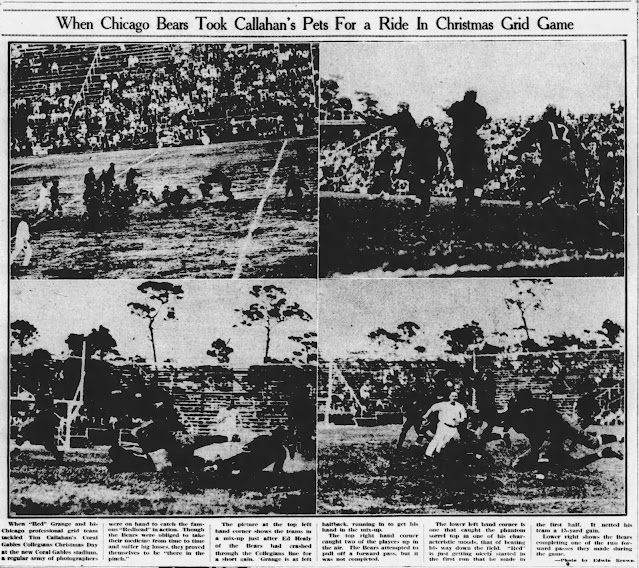 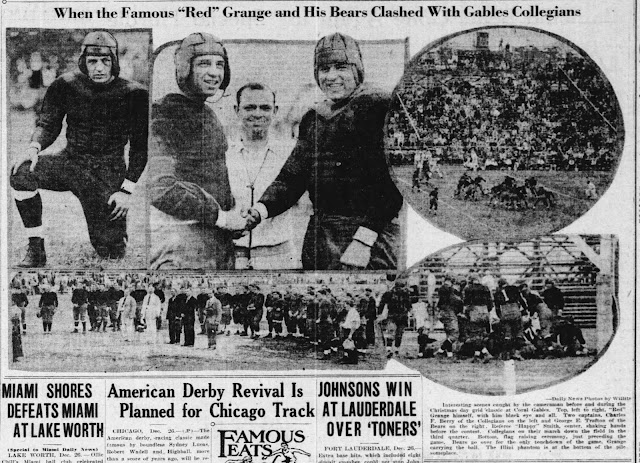