JIM CHEYUNSKI: Rising From the Ashes the 1975 Baltimore Colts 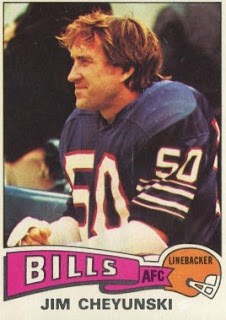 There have been many, many men who have played strong dedicated football over their time in the NFL and received very little fanfare. Today's saga is about one of those men—Jim Cheyunski. 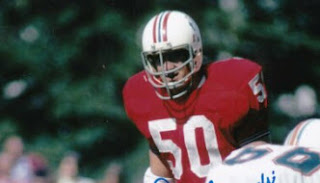 Drafted in the 12th round entering the 1968 season the Boston Patriots hoped he could make the team and contribute. During the strange season of 1969, Cheyunski became a starter and played well. The league has had a three-man linebacking trio's that have stood out, and most folks would be hard-pressed to name the starting trio of the Patriots, yet Ed Philpott on the strong side, Cheyunski in the middle, and John "bull" Bramlett on the weak side were strong tacklers, and excellent in pursuit.

After 12 games in '69 with a 4-8 record Boston still had an outside chance at a berth in the expanded playoffs in the last season of the AFL; this did not happen, and the next two years in the northeast the newly named New England Patriots were full of front office drama. Cheyunski continued as a starter, but was sent to Buffalo in April of 1973 in a six-player trade. 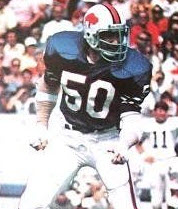 Cheyunski was a key part of the revitalized Buffalo defense that earned a playoff berth in 1974, but yet again he was traded—this time in the summer for a 6th round draft choice. Joe Thomas had drafted and traded, and then traded and drafted to put a Colt team on the field that he felt would become a factor in the highly competitive AFC eastern division.

Baltimore won opening day in Chicago, and as such had half as many wins after one game as they did the entire '74 campaign. The Colts under the guidance of new head coach Ted Marchibroda then struggled for four consecutive weeks; all loses.

October 5th, 1975 was in the Coliseum to watch the visiting Colts take on the powerful Rams, this actually was once a bitter rivalry, but now in different conferences they would see each other every few years. The youthful-spirited Colts gave the Rams all they could handle before succumbing late in the game.

Chuck Knox ground attack was productive and relentless, and as I watched began to realize that middle linebacker Mike Curtis while still a quality player was just not the Curtis of old. The write-up in Street & Smith's for that year raved about Curtis, but there were at least ten other middle linebackers in the NFL better than he was in his 10th year.

NFL Films had two shows that were mainstays for fans: "This Week in the NFL" with Summerall & Brookshier, and "Game of the Week". October the 12 the Buffalo Bills were hard pressed but still managed to beat a vastly improved Colt team on the "Game of the Week". Curtis started this game, but at one point Simpson is running left and is dropped for a two-yard loss as massive John Dutton, and quick Jim Cheyunski penetrate into the backfield to make the tackle.

Curtis started in the week five loss to the Patriots, and the so-called improved Baltimore Colts stood 1-4. The Colts had now lost 28 of their last 35 games, and next up Joe Namath and the Jets at Shea. Have the highest regard for Ted Marchibroda and his patience and teaching ability, and those traits had now taken root, and now Jones, Mitchell, and Kunz would bring back the enthusiasm that had been sorely missed.

The Colt offense was balanced and productive beginning with the victory over the Jets. When you watch film of the Baltimore defense, and read the publications all the "ink" was about the defensive line.

The "Sack Pack" was young, strong, dynamic, and could make play after play. The defensive co-ordinator Maxie Baughan had learned his lessons well from George Allen. Baughan understood the role his linebackers needed to play to solidify the defense. Tom MacLeod was no Ted Hendricks, but was rock solid on the strong side, and was named All-AFC by The Sporting News, and undersized savvy Stan White was one of the handful of weak-side linebackers who played zone coverage with aplomb (8 interceptions) and could also blitz effectively (6½ sacks).

This of course leaves Cheyunski, and my evaluation of him. He was an undersized tackling machine. Instinctive, and very capable of filling inside rushing lanes, the former Syracuse stalwart was exceptional in pursuit, and zone coverage.

Difficult to state which game of the season was his best, yet against the Browns he had 6 lead, and 8 assisted tackles. Baltimore had won four in a row to climb into contention and off to the Orange Bowl and the Dolphins.

Miami had won seven of ten so far against the Colts since '70 and earned a playoff berth all five years. The Colt 33-17 victory was the turning point in the season, and Cheyunski recovered a fumble(one of five takeaways by the defense) and made 3 lead and 4 assisted tackles.

Jim intercepted passes in the wins over Chiefs and the Giants. "Game of the Week" at NFL Films for December 14th would be the re-match of the Dolphins and Colts this time in fog-shrouded Memorial Stadium. As one would expect, Sabol and his talented compadres brought to life the 10-7 overtime thriller.

The Colt express was not going to be derailed, and they finished the season with a victory over the Patriots to finish 10-4 and when the AFC East. One of the keys to playing strong defense are half-time adjustments, and the Colts during the nine-game win streak allowed only 21 points in the 3rd quarter. The first five games of the season Baltimore allowed 152 yards a game rushing but during the win streak only 117.

Bum Phillips did an outstanding job with the Oilers as they fought tooth and nail for a playoff berth in the AFC Central, but there was no doubt coach of the year was Ted Marchibroda.

The playoff match up of the red hot Colts and the 12-2 defending Super Bowl Champion Steelers took center stage, and Baltimore fought valiantly against one of the best teams of that era. Cheyunski led the front seven in their ferocious battle with the Steeler ground attack in Pittsburgh. Jim Cheyunski returned to the Colts and they again earned a playoff berth in 1976.