The Giants website announced that defensive tackle John Mendenhall passed away last Friday at the age of 72.

In 1972 Mendenhall was drafted by New York Giants in the 3rd round (55th overall) of the draft. He became an immediate starter (and an All-Rookie selection) for the Giants at what they called 'middle guard' and recorded 2½ sacks and displayed good discipline in the middle—enough to allow Gregory to roam free in his "rover" position, which put additional pressure on all the other defensive linemen, including rookie Mendenhall but the scheme worked well in 1972. Mendenhall's 6-1 255 build seemed ideal for that position. And for that era, it was, 255 was more than big enough for a middle guard/nose tackle especially one with Mendenhall's quickness.

The next year Mendenall was hurt but Mendenhall showed that he had grown into his position, recording six sacks in eight games before going down to a left knee injury but he clearly was always around the ball from what film is available and was a force at the middle guard or "nose tackle spot' in the Giants unique rover 4-3.
Certainly, the Cowboys were impressed— 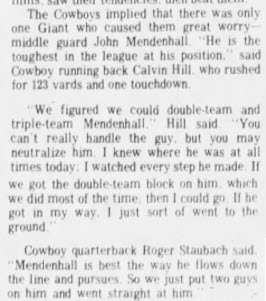 Mendenhall played almost all the games in 1974 and recorded seven sacks and got some recognition, gain Second-team All-pro honors from PFWA and First-team All-NFC from UPI. 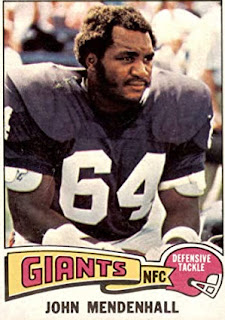 With Bill Arnsbarger's defense, he played both nose tackle and three-technique because the defensive lines shifted rather than 'flopped' depending on if they wanted to run an overshift or undershift, which freed Mendenhall some and got him away from double teams some.
Mendenhall still drew extra blockers but often he whipped them both and he also drew praise from his new coach— 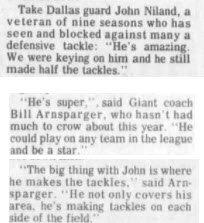 However the following season he missed half the season with another injury and it set him back. Even when he played early in the season he did so with a severe ankle injury and was not effective and eventually the Giants shut him down.
Mendenall was healthy in 1976 and 1977 and he had excellent seasons recording six sacks and 112 tackles (an amazing number for a defensive tackle) in 1976 and ten sacks and 99 tackles in 1977 and the Giants coached credited him with seven forced fumbles. 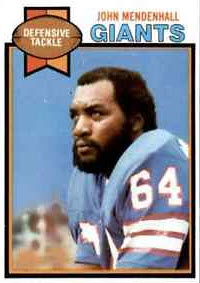 However, in 1978 new defensive coordinator Dick Modzelewski employed more and more 3-4 fronts and Mendenhall was not pleased. He was back to being on a center full-time (like in 1972-73) and he simply didn't like it. He felt it was too demanding on the defensive linemen and that the Giants linemen were not built for the 3-4. "You have tho have the right people for the 3-4", Mendenhall told the papers. His tackle total fell to 73 and sacks dropped to 4½ in the mixed scheme—some 4-3 and some 3-4.
In 1979 it was much more 3-4 and nose tackle almost all the time for Mendenhall and in 1980 he was traded to the Lions who were running a 4-3 under Floyd Peters, who had coached him when Arnsbarger was the coach. The Lions needed a replacement for Doug English who retired to go into the oil business. Mendenhall played well, recording four sacks on a team that recorded 44. It was Mendenhall's last NFL season.
In his career, Mendall played 116 games with 110 starts and record 42½ sacks was Second-team All-pro and All-NFC in 1974, and was honorable mention All-NFC in 1976 and 1977.
In college, Mendenhall was selected All-Louisiana in 1971, Little All-America by the AP and was was also an All-NAIA selection, and was the team's defensive MVP.
According to Giants.com: "John Rufus Mendenhall was born in Cullen, LA. on Dec. 3, 1948. He is survived by his wife, Stephanie, and daughters Zandra and Kendra."
Posted by John Turney at 4:54 PM