Raymond Clayborn—Lost the the Crowd? 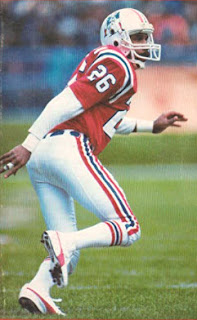 In a decade that was full of great corners, sometimes we think Raymond Clayborn does get lost in the shuffle a little bit. We not necessarily suggest he was better than some of the Hall of fam corner from that era and even some that are still waiting, but he was a guy you could win with and he, like Albert Lewis, brought something extra to the table in terms of special teams, as a returner.
Said Joel Buchsbaum in the mid-1980s about Clayborn,  "A complete corner who rarely gets beaten deep and though he can no longer run a 9.5 he can stay up with the speedsters".
Clayborn was the conscience of his rankings among his peers, even late in his career (1990) he told the papers, "I really want to go out there and be the best. I feel like I have been the best for a number of years. Last year I played very well. I was probably the best cornerback in the NFL although I didn't get the accolades that I deserved".
Early in his career, Clayborn was overshadowed by "The Shadow"—Mike Haynes, the All-Pro on his own team. Later, All-Pros like Lester Hayes, Hanford Dixon, Frank Minnifield, Albert Lewis, Everson Walls, Darrell Green, and others all got All-pro selections but so did Clayborn.

He was All-Pro in 1983 and Second-team All-Pro in 1985 and 1986 and making the Pro Bowl all three of those seasons. He was tall (6-0) and had long arms and had good catch-up speed, especially early on to make him an effective corner.
After Mike Haynes was injured and then traded to the Raiders, Clayborn moved to a more natural position of right corner and he began to really show his wares, beginning his run of receiving "honors".  In fact, in 1983 he picked off no passes but in the Sporting News poll of players he came up as one of the two best corners in the NFL. He just didn't get picked on and didn't get chances for many picks.
The other aspect we mentioned was his role as a great kickoff returner early in his career—which he only did for two seasons but as a rookie, he returned three kicks for touchdowns and averaged 31.0 yards a kick. In the history of the NFL, only four players have returned three kicks for touchdowns and averaged over 30.0 yards a return while returning 25 or more kicks. the other three are Ron Brown (1985), Abe Woodson (1963), and Andre' Davis (2007). Not a bad achievement.
So, here is a guy called by Buchsbaum a complete corner who was "above the line" in honors four times and was a stellar kick returner. You could sure so a lot worse at corner/kick returner in your secondary.
Stats— 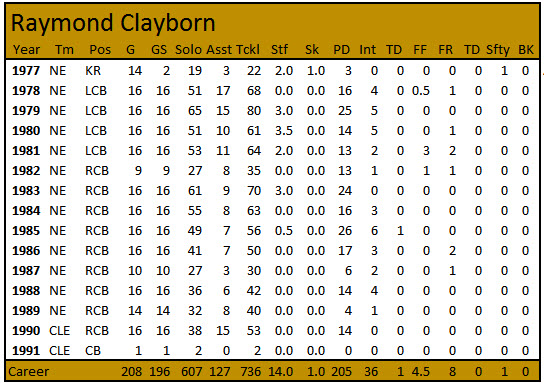 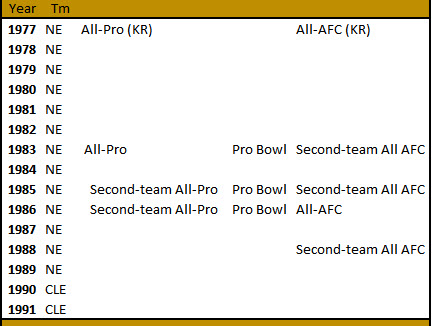