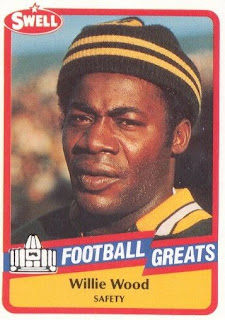 When we made our top safeties list we had Willie Wood about 10th to 12th or so. Coach TJ Troup kind said, "You may want to look at that again, he's a top 10 guy". We did and Coach was right. Wood ended up seventh on our list.

Today we bid him adieu. He passed away yesterday at age 83.

Wood was a  seven-time All-Pro (four consensus) and a nine-time Pro Bowl/All-NFC level player he received post-season honors of one kind or another for ten straight seasons. He was All-Decade for the 1960s and is a Hall of Famer. He led the NFL in picks in 1962 and wears five NFL Championship Rings. He was inducted into the Pro Football Hall of Fame in 1989 and the Green Bay Packers Hall of Fame in 1977.

Wood intercepted 48 passes, returning two for scores and recovered 6 fumbles. Additionally, for the first five years of his career, he was a dynamite punt returner and was also a kickoff specialist at times, too.

He was a big-time hitter and tackler and had good (not great) speed, desire and tenacity and great ability to leap. He learned his trade from Emlen Tunnell who was with the Packers when Wood entered the NFL.

He was on the small side when he came into the NFL, but he had the proverbial 'big heart'. He was converted from quarterback to safety when he entered the NFL. Wood became the first African-American quarterback in the Pac-12 (then known as the Pacific Coast Conference), in 1957. He was a three-year (1957-59) letterman quarterback and defensive back with USC and was the team captain as a senior on the 8-2 Trojans. Prior to going to USC Wood played Coalinga (Calif.) Junior College, where he was a JC All-American.

Time has sort of forgotten Wood, which is too bad. You don't see younger fans know how great he was. But his opponents did. Raymond Berry said, "Willie gave the Packers the ability to call one defense and get many interpretations of it. He smells a play, and takes off on his own, to break up a play he should have never even been near."

We first met Wood when we interviewed him for "Blood Equity" a documentary film produced by Roman Phifer, Rico McClinton, Louisa Spring, Joe Ruggiero. Wood at that time (2009) was already in assisted living in Washington D.C.

In some ways, he's the epitome of the NFL experience. Moved from quarterback because of bigotry, moved to safety, but was undersized. He became a coach, again facing discrimination but at least got some shots in WFL and CFL, but never one at the NFL level. Then in later years suffering from what was more than likely health issues related, if not caused by his play on the field.
Posted by John Turney at 5:29 AM