Seven Teams Change Uniforms in 2020—These Are Our Grades

UNIFORMS
By John Turney
This year there were seven teams that changed uniforms, but one of them—the Colts were minor leaving six with what would normally be called "new uniforms"

Since Nike took over as the only uniform provider to the NFL in 2012 there had only been ten uniform changes in total (Jacksonville had two of them). Of the seven this year two are also included in the previous ten.

In these seven or six if you will, Cleveland, Tampa Bay, and the Los Angeles Chargers are reverts to former uniforms so the Nike influence is minimal on those. The Patriots are simply a change from their familiar uniforms to what had been their color rush uniforms and then they added a white road jersey. Only the Rams and Falcons allowed the Nikefication of their uniforms, and it showed.

So, we will give overall grades for each, with individual grades on each iteration shown in each team's release photos.

Here is the LINK to the polls cited—NFL Jersey Tier Rankings, 4,710 responses 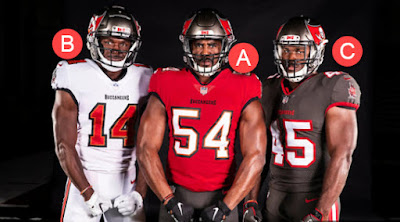 The pewter over pewter is kind of "meh". Others very good.

Buccaneers Owner/Co-Chairman Ed Glazer stated: "This new but familiar look is a direct result of the valuable feedback we received from our fans. We are excited to return to our classic Super Bowl era uniforms while also introducing a sleek Color Rush uniform that showcases our signature pewter in a new and dramatic way. The refreshed classic design of our home and away combinations bridges our past with our exciting new future, and we are confident it will resonate with our fans." 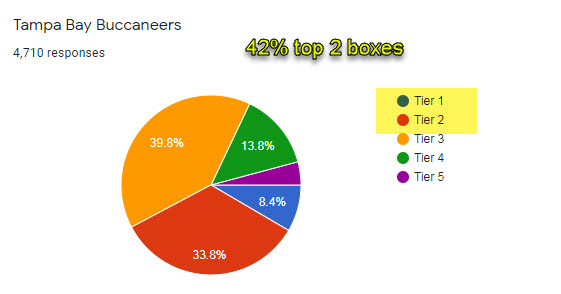 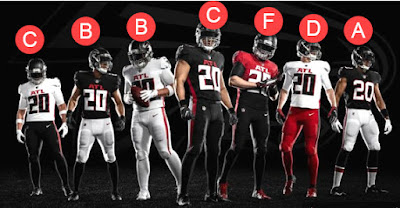 Said the Falcons, "Like the city of Atlanta, black evokes strength, power, grit … and a little bit of swagger. Black jerseys have been a part of Falcons history since they first took the field in 1966, during the original Dirty Bird era in the late 1990s, from 2003-08 and more recently as alternates or throwbacks. The color red reflects a shared sense of community in Atlanta as most of the major sports teams and many iconic homegrown brands share the color."

Further, "Atlanta is known as much for diversity and culture as it is for innovation and creativity. From music and design to business and technology, the city of Atlanta influences everything. The Falcons have a proud tradition of bringing people together from all walks of life, so the new ATL mark is placed proudly and prominently across the chest of the new uniforms as a reflection of a city constantly on the rise."

Matt Ryan said, "There's just a feeling to it. I can't explain it when you look in your locker and that color and head to toe in black is going to be good, too. I don't know what it is, but I know there's a feeling that comes with it for the guys, too, when we see that in our lockers."

Grady Jarrett added, "I think these new uniforms will give us, give the city a new energy and I think people are going to really be excited about it. We know this is a tough time for everyone right now, but we hope this can bring some excitement and light to our city and our fans. Around the whole world, everybody knows what ATL stands for, so we're proud to represent that, today and every day."

" Just letting them know exactly what we're playing for, the city we're playing for. There are a lot of people in this city that ride for the Falcons, and we want to let them know that we're riding for them, also. I like that." Deion Jones added.
The Falcons helmet has evolved from a traditional glossy look to a more modern all-black satin finish 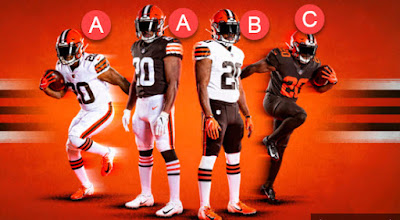 "As you look at iconic franchises like the Browns, the Bears, the Packers, the Cowboys — they're true to who they are. They're not doing a lot of changes and trying to make a lot of flashy moves with their uniforms. I think when we went through the process, it just felt right that we got back to who we are and who we'll always be."

He is right. What they did before stank. This is the right directon. 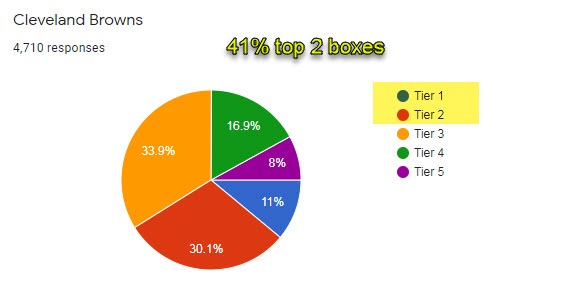 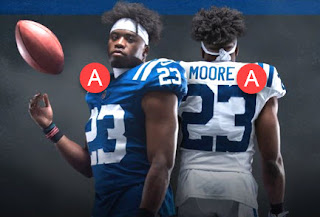 All the Colts did was add serifs to their numerals, but the change is an A. we've wanted that for years.

The Colts also made some changes in their wordmarks and added a secondary logo, all of which was well and good. But the main thing was the excellent change in the numerals. Well done, Colts. 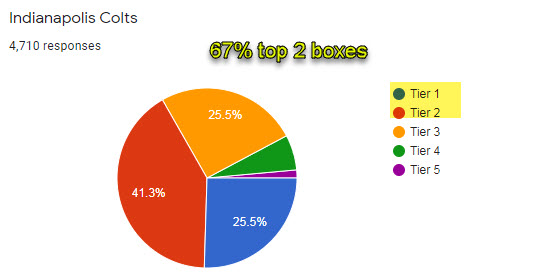 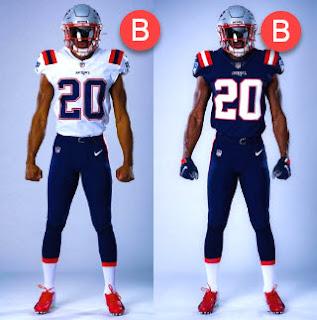 Fans have a different view than we do, but they also have a 39% chunk of votes in the middle box. The Patriots hinted that throwbacks might be in the offing when the one-helmet rule is lifted in the next year or two. We'll see, These are fine. Not bad. Not stellar. 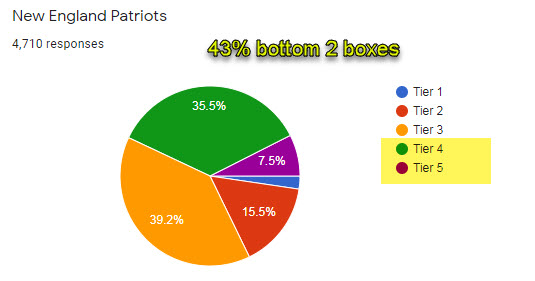 Chargers killed it. Talk about a "modern take on a classic uniform". Many have tried, the Chargers did it.

Said the Chargers, "We evolved it, simplified it, took what YOU loved about it, and made it even better.  Drawing inspiration from California in the 1960s, we set up shop with Nike and the NFL to modify a classic. Staying true to Powder Blue and Sunshine Gold we set out to do just that with a bold, vibrant, and electric update that pays tribute to our AFL roots." 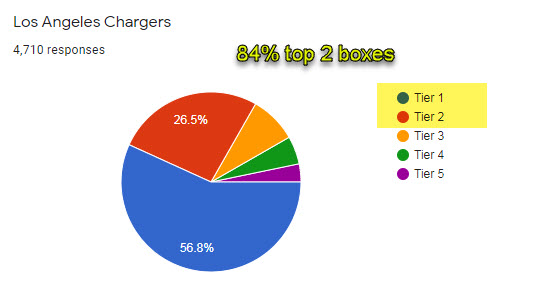 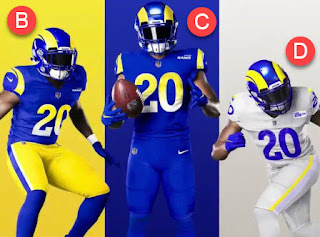 The colors are good. The blue over yellow is good. The blue over blue is decent. The light gray over light gray will look washed out and with no contrasting stripes on shoulders or pants or socks all anyone will see is a wave-horn and the numerals. It will just be gray.  If a team is going to do all gray there has to be contrast—blue socks, blue striping somewhere. The whole kit gets a one-lettr downgrade because of the lid. The broken wave-horn is not a ram horn. It's supposed to be a wave, a Fibonacci spiral, anything but a traditional Ram horn. 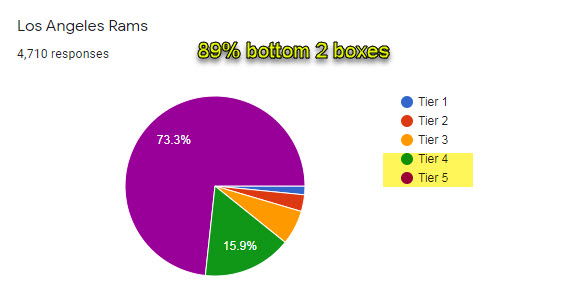