He did it again. Marlon Humphrey forced two fumbles tonight taking his season total to right—two behind the NFL record and the NFL  record for defensive backs. 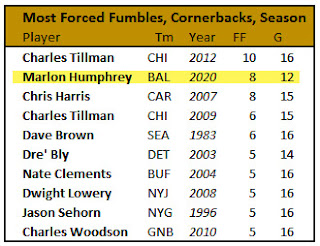 With three games left he has a realistic shot at the record. There are about 10-12 players with eight forced fumbles in a season and Humphrey is currently tied with them. One more and he jumps onto this list which is the single-season leaders of all time. Unlike many stats that are fairly recent, we are fairly confident that there were not any pre-1999 or pre-1982 players with more, although we cannot rule it out completely. 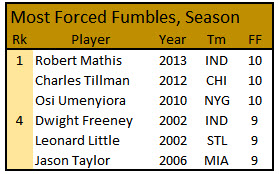