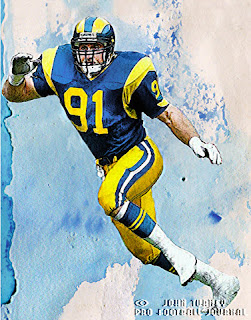 Kevin Greene was a walk-on at Auburn University after dominating intramural football there. He worked his way onto the War Eagle team and worked his way into the NFL.
He was drafted by the Rams in the fifth round in 1985 and was a special teams standout that year and by the end of the year, he was a left defensive end in their nickel packages, earning his first sack in a playoff game versus Dallas.
The next couple of seasons he continued in that role and also would spell starting linebackers Mike Wilcher and Mel Owens in the base 3-4 defense. In 1988 he got his chance to start and began his dominance as a pass rusher leading the team with 16.5 sacks that year and 16.5 the next and 13 in 1990.
That year (1988) the Rams began playing a scheme that had in their playbook since 1983 but seldom used called the Eagle defense. Greene was born for it. It allowed him to rush the passer and play the run as a "read", in other words, if run 'showed' make the tackle but don't do anything but get the quarterback otherwise.
Over the next three seasons, Greene led the NFL in sacks with 46 in that span. However, the Rams had a poor season in 1990 and it led to the firing of Fritz Shurmur and brought in a new defensive coordinator named Jeff Fisher. It brought a new scheme, more of a 4-3 look, and those plus injuries just didn't work, and that led to the firing of John Robinson.
In 1992 the Rams stayed with the 4-3 and Greene was asked to do a lot of new things. He still rushed the passer on third downs and totaled 10 sacks and was named to Sports Illustrated's All-Pro team but he played inside in some nickel packages, covered backs out of the backfield more often than he ever had, and while he was good enough, he was not made for that. He was made to go forward.
Greene was made for the 3-4 defense. With few options, as teams were moving to the 4-3 scheme more and more in 1993, singed with the Steelers (one of three teams still using the 3-4) and he found his mojo again. he was a Pro Bowler, an All-Pro, and even an NFLPA AFC Linebacker of the Year in 1994.
In 1996 he was a free agent once again and signed with his coach Dom Capers with the Panthers and he was the NEA Defensive Player of the year there and again was the NFLPA Linebacker of the Year, this time for the NFC. (He won it again in 1998 for the Panthers). In addition, he was voters the NFL Alumni NFL Linebacker of the year in 1996.

He went to the 49ers in 1997 for a year but in 1998 returned to the Panthers for his final two seasons and ran his career total of sacks to 160—the most-ever for a linebacker and officially third-most all time.
He passed away today at age 58.
He is survived by his wife Tara, a son, Gavin, and a daughter, Gabrielle. The cause of death has not been released.
Greene was born on July 31, 1962, in Schenectady, New York, and was the part of an Army family that moved a lot, he began playing football on military bases. His moved to different bases and spent three years in Germany before they settled in Granite City, IL in the 1970s.
At Granite City High School Greene played football (honorable mention All-Conference), basketball, and was a high jumper for the track team, and graduated in 1980. Later, in 1998, he was inducted into the Granite City Sports Hall of Fame.
He was the 1984 SEC Defensive Player of the Year and Zeke Smith Award winner and led the SEC in sacks with 11 in 1984. Greene earned a degree in criminal justice at Auburn. He completed ROTC while at Auburn and was commissioned a second lieutenant in the Alabama Army National Guard. He is also a member of the Alabama Sports Hall of Fame, class of 2002
In all, he played for Los Angeles Rams (1985–1992), the Pittsburgh Steelers (1993–1995), the Carolina Panthers (1996, 1998–1999), and San Francisco 49ers (1997)
He was inducted into the Pro Football Hall of Fame in 2016 and was a five-time Pro Bowler, three-time  First-team All-Pro and NEA NFL Defensive Player of the Year (1996), and the UPI NFC Defensive Player of the Year that same year. He led the NFL in sacks twice (1994 and 1996) was a First-team NFL 1990s All-Decade Team.
As mentioned above he was the NFLPA Conference Linebacker of the Year ( 1994, 1996, and 1998) and the NFL Alumni NFL Linebacker of the Year in 1996. 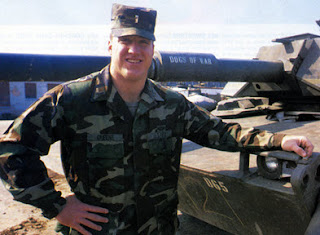 Greene served as a captain during a 16-year Army Reserve career, drilling at Fort Knox and He also attended (JMOC) Jr. Officer Maintenance Course as well as (TC3) Tank Commander Certification Course at Fort Knox, Kentucky. He was also a United States Army Paratrooper having attended the United States Army Airborne School at Ft. Benning, Georgia.
He turned his talents to coaching and for five seasons (2009-13) Greene was Green Bay's outside linebackers coach on Mike McCarthy's staff including the Packers' Super Bowl XLV championship year of 2010. He took four years off from coach to spend time with his family and returned to the NFL as the outside 'backers coach for the Jets in 2017-18.
Along the way be had a foray into professional wrestling as a tag team partner for fellow NFL player Steve McMichael among others.
In a way, he was an enigma. He was conservative in values such as the military, Christian values, family values, etc., but he often wore his hair like a surfer god of a sixties radical.
He had tremendous respect for the NFL game and those who came before. He coached players "the right way" to play the game. But he was kind of a wildman, a talker on the field.
He was flawed, yet perfect in a way.
Posted by John Turney at 3:04 PM